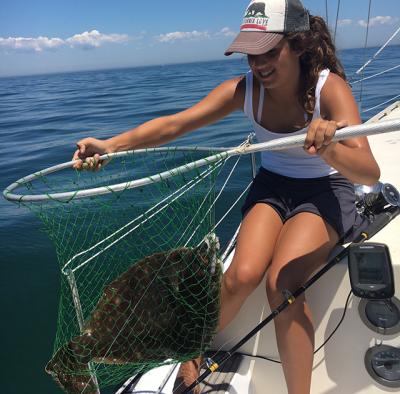 It’s difficult to cast a sinker and a hook baited with clam or bunker a long distance. Any attempt to muscle the cast often results in a tangled mess or bait flying wildly off the hook. Figure an average surfcaster can fling lead and bait about 50 yards on a good day. An accomplished surfcaster can send them maybe an additional 50 yards, give or take. If the fish are hanging 75 yards offshore, most anglers can expect a long and frustrating day on the beach. Unless, of course, they own a Sand Blaster Bait Caster, or S.B.B.C.

The S.B.B.C. is a patented and slick-looking stainless steel casting device that uses compressed air to launch rigged bait through a long tube far into the deep blue sea. Ever been to a ballpark where they use air guns to send promotional items way into the upper deck? Well, it’s pretty much the same concept except the S.B.B.C. sits on the ground and shoots stinky bait instead of a T-shirt. With just a seven-foot rod and a compact tractor battery, a novice surfcaster can toss up to 20 ounces of sinker and bait 300 yards or more, according to the product information and the definitely must-see instruction videos provided on bunkerupfishin.com, the manufacturer’s website.

The first step in achieving total surfcasting domination with the S.B.B.C. is to place the baited hook, custom sinker, and water in the company’s patented missile-shaped plastic bait mold. The mold can hold up to six baits or any combination of baits and liquefied ground chum. Next, put the mold in a freezer and begin praying that your spouse doesn’t discover the smelly mixture before you remove it. Once frozen into an aerodynamic shape and removed from the mold, the bait, hook, and sinker are ready for send-off.

The S.B.B.C.’s setup appears pretty simple. First, place the fishing rod on rod holders that position it parallel to the launch tube and then open the reel’s bail. Second, power up and start the companion air compressor using the recommended compact tractor battery and charge the compressor’s air tank until the pressure reaches 80 pounds. Third, slide the slippery bait mortar down the launch tube. You are now ready to pull the trigger and hurl the frozen projectile far into the ocean where it thaws and reveals the baited rig. Pretty cool, eh?

Put aside for the moment the issue of how one feels a bite at the end of 300 yards of line or how to set a hook at such a great distance and just appreciate the genius of this revolutionary $999 product.

Someone on the East End must buy one! You supply the frozen bunker and I’ll bring the frozen margaritas. Deal?

Congratulations to Capt. Jake Nessel of the EbbTide out of Montauk, who has been named Fishing Legend of the Year by his peers in the local fishing community. Captain Nessel began his career in the Montauk sportfishing industry in 1955 working as a deckhand on various party boats. He has been the captain of the Marlin5/Ebb Tide since 1996.

An award ceremony honoring Captain Nessel will take place at the Montauk Grand Slam Charity Tournament 2016, to be held on Saturday and Sunday at Uihlein’s Marina in Montauk. The tournament is sponsored by the East Hampton Kiwanis Club and the Montauk Friends of Erin. Information about the tournament, which awards big prizes to the winners of the recreational, party boat, and commercial/professional divisions, can be had at 631-668-379. All participating children ages 13 and under receive an Optimum Youth Anglers Plaque.

Big striped bass followed bunker into local waters and the Point lit up like a rocket this week. Paul Apostolides at Paulie’s Tackle in Montauk reported that fish 30 pounds and more were routinely landed under the Montauk Lighthouse on bucktails throughout the day. The action was furious and nerves as well as braids were frayed as surfcasters stood elbow to elbow on the rocks. No knockouts were recorded. Apostolides noted that the stripers will eventually follow the bunker toward Block Island, as they have in the past, unless the fish decide to enjoy resident sand eels and squid.

Harvey Bennett at the Tackle Shop in Amagansett reported several stripers above 30 pounds were taken by surfcasters at Napeague beaches on diamond jigs. Several of his customers nabbed stripers above 40 pounds at Montauk. Bennett added that the combination of an east wind, low pressure, and cool temperatures often precipitates a nice striper bite around this time of year.

Ken Morse at Tight Lines Tackle in Sag Harbor said that one of his customers, John Fischetti, caught a 50-pound striper from his boat off Montauk while another, Klever Oleas, hooked a 44-pound fish from the rocks under the Lighthouse.

T.J. at Gone Fishing Marina in Montauk said that boat anglers were landing large bass on wire-lined umbrella rigs, parachute jigs, and tubes as well as live-lined eels during the day. Bluefin tuna were spotted in Butterfish Hole by several boats passing through the area, he added.

Fluke fishing is good in the bay, though there are lots of shorts in the mix. Sebastian Gorgone at Mrs. Sam’s Bait and Tackle said an eight-pound fluke was taken around the Ruins. Thirteen-year-old Anni Spacek caught a nine-pound fish around the Shagwound buoy from a sailboat.

Fluke are biting from Accabonac to Napeague, according to Bennett, and T.J. at Gone Fishing said Montauk’s north rips and south of the radar tower in 80 feet of water are prime spots for consistent keeper fluke fishing.

Sea bass can be found on the backside of Gardiner’s Island and are biting hard in Montauk, where keeper fish are plentiful.

The Tackle Shop in Amagansett now has a website: thetackleshop.org. Wok ’n’ Roll in Montauk, famous for cooking a fisherman’s fresh catch in the style of his choice, has closed. Maybe another Montauk restaurant can assume this longtime hook-to-table tradition?

The Star’s fishing columnist can be followed on Twitter, @ehstarfishing. Photos of prize catches can be emailed to David Kuperschmid at [email protected].