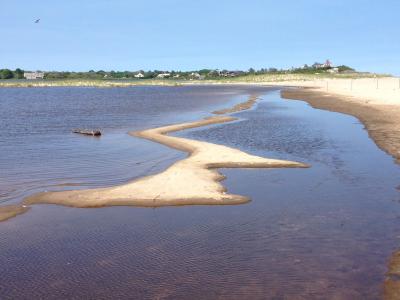 Efforts to restore Georgica Pond are proving successful, the East Hampton Town Trustees, who manage many of the town’s waterways on behalf of the public, were told at their meeting Monday.

Sara Davison, executive director of the Friends of Georgica Pond Foundation, a group of pondfront homeowners, described the preliminary data on its 2017 mitigation efforts to the trustees.

The pond has been afflicted by toxic cyanobacteria, or blue-green algae, in recent years, which can cause serious health problems. This year, Ms. Davison said, has “turned out to be an excellent year for the water quality of the pond.” Dissolved oxygen levels were high, there were no fish kills, and a single cyanobacteria bloom, in June, lasted just one week. “If you compare that to past years, that’s really quite a significant improvement,” she said, “and we’re all very happy about that.”

For the second consecutive year, the foundation has leased an aquatic weed harvester to remove plant material, or macroalgae, from the pond, which releases nitrogen and phosphorous as it decays and is believed to promote cyanobacteria.

The removal this year of 32,700 pounds of this material represents 6 percent of the pond’s nitrogen load and 12 percent of its phosphorous load, Ms. Davison said. She explained that the material removed was taken to the town’s recycling center for composting. She also noted that the improvement of the pond had taken place despite the fact that it was not opened to the Atlantic in the spring, one of the two traditional annual lettings the trustees authorize, which help to circulate the water and flush it of toxins.

The pounds of macroalgae removed were down from 2016, when 55,740 pounds, representing 13 percent of the nitrogen load and 23 percent of the phosphorous load, were harvested, Ms. Davison said. She said the decrease was due to two things: mechanical difficulties — “the oldest prototype of an aquatic weed harvester known to man” quickly broke down and was replaced by a second, “no spring chicken, either,” she said. It also was a likely consequence of the large quantity of macroalgae removed the previous year. Christopher Gobler of Stony Brook University’s School of Marine and Atmospheric Sciences, who has been conducting water quality tests for the trustees for several years and, more recently, for the Friends of Georgica Pond Foundation, plans to deliver a final report to the trustees early next year, Ms. Davison said. “We’re encouraged by the results of the harvester. We do think it’s helping the water quality.” She asked for the trustees’ approval to continue the effort in 2018.

Among other remediation efforts this year, Ms. Davison told the trustees, was the installation of the first up-to-date septic system at one of the pond’s 75 surrounding properties. Such systems, recently approved by Suffolk County, significantly reduce the amount of nitrogen leaching into groundwater. Not ing that fully half the nitrogen entering the pond comes from septic systems, Ms. Davison said, “We’re committed to getting every home around the pond upgraded.”

Stormwater runoff also contributes nitrogen and phosphorus, Ms. Davison said, “but thanks to a real push” by East Hampton Village, Drew Bennett, a consulting engineer, had prepared a plan to reduce direct discharge into the pond from a drainage pipe originating at Cove Hollow Road. The plan calls for diverting more water along the course of the pipe and installing more filters to eliminate nitrogen and pathogens. She expressed hope that “this project can get started early in 2018.”

In other news at the meeting, the trustees’ next meeting, on Dec. 11, will be its last this year. It will start early, at 6 p.m., for a presentation by officials of Deepwater Wind, the Rhode Island company that is planning the South Fork Wind Farm, a 15-turbine installation approximately 30 miles east of Montauk.

The trustees’ harbor management committee has hosted Deepwater officials at several meetings this year, where commercial fishermen have stated their opposition to the project on the grounds that it may disrupt their work and destroy marine habitat.

Rick Drew, a deputy clerk of the trustees, said on Monday that Deepwater Wind officials would present the conclusions of its environmental studies of the area as well as surveys at the Block Island Wind Farm, a five-turbine installation which began operation last December, at the meeting.

“The meeting on the 11th is really going to lift the veil on the project,” he said. “I think it’s going to be very clear on the 11th how genuine, detailed, and professional their environmental findings are. We all need to bring our ‘A’ game and questions to the meeting.”

The harbor management committee will also meet once more this year, on Dec. 14, Mr. Drew said. The meeting will be at the Donald Lamb Building in Amagansett, site of the trustees’ offices, unless turnout requires a larger space. Members of the public wishing to attend have been asked to contact the trustees’ office.