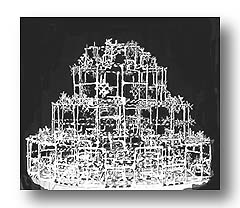 Victor D'Amico, the founder of the Art Barge, and his wife, Mabel, built their house on Lazy Point's Shore Road during World War II when building materials were rationed. So, as was their habit, they devised a creative solution to the shortage of wood, reusing the timber from an UpIsland house. The resulting structure, which is now open to the public by appointment, may be one of the D'Amicos' greatest works of art.

An ever-evolving entity into which they poured their considerable talents and ingenuity, it is part mid-20th-century modern, part fish shack, and a wonderful window into the lives of its late owners.

The D'Amicos had initially considered building a house off Napeague Meadow Road, where the Art Barge now sits. When they bought the Shore Road property, overlooking the Napeague Harbor Inlet, a house had already been started there. At first they would throw a tarp over the beams and live outside; they began building in 1940. It was Mrs. D'Amico's job to pull all the nails out of the old wood, and they poured concrete, laid cinder block, and installed the fixtures themselves.

Mr. D'Amico was the director of education at the Museum of Modern Art. Mrs. D'Amico was a high school art teacher in Rye, N.Y., and a sculptor who used found objects. Both had studios in the house.

"The combination of making the house and making the artwork, it was a construction within a construction," said Christopher Kohan, the president of the Barge's board of trustees. If "waste not, want not" was the motto of their generation, the D'Amicos gave it new meaning. From the furniture to their wardrobes, they fabricated nearly everything in the house, and what they did not make they collected or found and put to new use.

After retiring from her job in Rye, Mrs. D'Amico devoted more time to her sculpture, glass work, and painting. She scoured the beach and the town landfill for treasures.

"The D'Amicos' wealth was not in their bank account, but in their creativity," Mr. Kohan said. The evidence of that is everywhere in the house, where form follows function, with a bit of whimsy. Shelves in front of the windows hold Mrs. D'Amico's colorful collection of perfume bottles, colored glass, and beach glass sculptures. She made the reverse-painted glass plates in the kitchen and the fanciful glass tiles on the bathroom vanity.

For all the practical needs that might arise in a house, the D'Amicos constructed or modified something in just the right way. Walking through the house, a visitor gets the impression that they were never sitting still at Lazy Point. And, despite the volume of material they had on hand, perhaps as a product of their years as art educators, they kept things meticulously organized.

Mrs. D'Amico made all her own clothing and jewelry and many of her husband's clothes as well. She sewed, knitted, and crocheted. She cut apart old mohair blankets to make jackets, which she finished with decorative stitching, and once made a jacket from a banner that had hung outside the Museum of Modern Art announcing an exhibit on artists' signatures.

Her handmade clothes range from flamboyant housedresses to smart and stylish pantsuits and delicately crocheted sweaters. She made buttons and pendants of clay, cast acrylic, fused glass, sycamore slices, driftwood, and acorn tops. "In Her Own Fashion," an exhibit of Mrs. D'Amico's "artwear" and jewelry, curated by Marcia Cohl, has been up at the house since Sept. 15. But as much as can be seen on display, there is three times that in the closets, which are arranged by color.

Mrs. D'Amico died in 1999 and willed the house to the Art Barge. It had been used before for meetings and teacher trainings, but now it will provide winter office and workshop space, while also serving as a house museum and exhibit area.

"It's not just the Pollock house, which was a reconstruction. This is designed from the ground up in this location, so we thought it was all the more important to preserve it and to go public so the community can share it," Mr. Kohan said.

There is still plenty of raw material for future art projects. Even in death, it seems, the D'Amicos will continue to educate.

"The only thing missing is Mabel and Victor in the house," Mr. Kohan said. Jet, Mrs. D'Amico's cat, still lives there, and the plants that fill her greenhouse in the cooler months are still moved outside in the summer - "All that's very vital to the function of the house and how they lived. This is an ongoing process from 1940 and it really isn't finished."

The house is open to visitors, including school groups, by appointment, Saturdays through Tuesdays.