'All My Sons' at Guild Hall Not to Be Missed 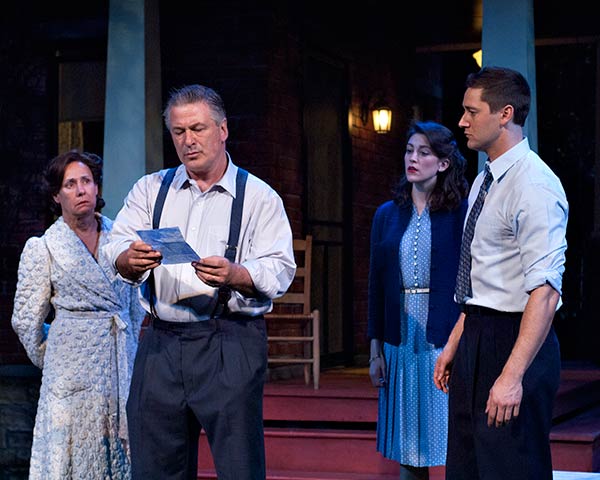 As directed by Stephen Hamilton, the cast of “All My Sons‚” at Guild Hall, from left, Laurie Metcalf, Alec Baldwin, Cailin McGee, and Ryan Eggold, provides a flawlessly acted production.

In 1947, after a string of commercially unsuccessful plays, Arthur Miller vowed to “find another line of work” if his next one did not find an audience.  That next play was “All My Sons,” which proceeded to run for 328 performances.  It won that year’s New York Drama Critics Circle Award (chosen above Eugene O’Neill’s “The Iceman Cometh”) and was made into a film starring Edward G. Robinson and Burt Lancaster. No plan B was necessary. A revival of “All My Sons,” starring Alec Baldwin and Laurie Metcalf, is now running through June 28 at East Hampton’s Guild Hall. Let me state unequivocally that it is regional theater of the highest quality, and that fans of serious drama should not hesitate to try and secure a ticket before the show’s run is finished. The setting is a small industrial town near Cleveland in 1947, and the plot is intricately engineered. Mr. Baldwin plays Joe Keller, the operator of a wartime parts factory. He has recently been exonerated of shipping damaged cylinder heads for fighter planes, resulting in the deaths of 21 soldiers. Ms. Metcalf plays Joe’s wife, Kate, who refuses to believe that their son Larry was killed in the war, though he has been missing for over three years. Complicating things is their surviving son, Chris, who wants to marry Ann Deever, to whom his brother Larry was previously engaged. Mrs. Keller likes Ann, but she is against the marriage, since she is convinced Larry will one day return.  You can occasionally find the 1948 film version of “All My Sons” listed as a film noir, and one of the miracles of Miller’s play is how a work this plot-driven can carry such an emotional wallop. The director, Stephen Hamilton, is successful in wrenching every last emotion from the script, and for this Mr. Baldwin can certainly take his share of credit. His performance as Joe Keller takes a little time to get rolling — there is a moment or two in the first half where the actor’s projection seems muted — but as the plot unfolds and Joe’s innocence begins to be questioned, Mr. Baldwin (apart from comedy, an actor who always seems most comfortable working in intense registers) puffs out his chest and delivers both truculence and a surprising dose of tenderness. He makes Joe Keller exactly what he must be: both likably human and tragically flawed. As fine as Mr. Baldwin is, it is Ms. Metcalfe who turns in the show’s singular performance. Her Kate is a livewire of pain; her lines come rattling forth in a kind of panic, as if giving herself a second to think might allow her to see the truth about her son. Her perpetually sour mask of a face, however, belies her knowledge of what she instinctively knows but cannot admit. Kate Keller is a beautifully written character, of course: a clenched fist of denial, yet capable of odd humor. But Ms. Metcalf adds to Kate a scalding hurt that brings electricity to every scene she’s in. The play is most alive when she’s on stage. This intensity is offset by Ryan Eggold as Chris Keller, an actor so relaxed that at the beginning of Act 1 you think he can’t possibly summon the moral outrage required by the play’s climax. But he gets there, incrementally turning up the heat as the play progresses and his worst fears about his father are confirmed.   The supporting cast is all excellent, with a special nod to Caitlin McGee as Ann Deever. She embodies Ann with just enough sass to convince us she is a Midwestern girl who’s just spent a few years in New York. And Bethany Caputo does a nice turn as a nosy neighbor who tries to bully Ann into leaving so that her wandering-eyed husband will have less distraction. There is a terrific set by Michael Carnahan that allows the audience to see both the facade of the Keller family’s home and also the action unfolding inside it. Like the play that came just after it, the towering masterpiece “Death of a Salesman,” this is a tragedy firmly in the Greek tradition. And this production’s ending is both paradoxically painful to watch and beautifully acted. Ironically, it was this ending that got Arthur Miller in hot water with the House Un-American Activities Committee during the Red Scare of the 1950s.  With its dark take on American business, it was seen as promoting a “socialist” agenda. Of course, that seems pure madness now. At its heart, “All My Sons” is a play about fathers and sons, lost idealism, and the horror of war. And this sterling, flawlessly acted new production at Guild Hall does its writer and his grand themes proud. It is the can’t-miss cultural event of the Hamptons season.