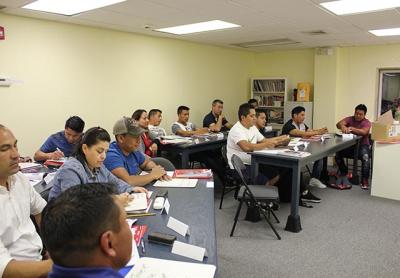 Louise Bergerson’s English as a second language class used mini white boards to practice spelling and writing numbers during the second session of the academic year.
Jackie Pape
‘We should be able to communicate,’ a program co-founder says
By
Jackie Pape

Instead of going home after a long workday, over 100 Latino students attend a two-hour English as a second language program in Wainscott on Thursdays. However, unlike typical students, they range from 20 to 40 years old, and are thrilled to be there.

Cheerful as they wait in line to be checked in to Aprendiendo Inglés Ahora E.S.L. classes, men and women with pencils and notebooks in hand, kiss hello before being directed to their level-appropriate classrooms. Five levels of English are taught by 14 teachers.

Louise Bergerson, an Amagansett resident who retired in 2014 from a 35-year career as a middle and high school science teacher, department head, and eventually the academic dean at a private school in Manhattan, a director of the program, had committed herself to teaching English on the East End. She teaches level 1 (the second level after basic).

The idea had been long in the making. Adriana Leon, an East Hampton resident who moved here from Ecuador in 1997 and has worked for Ms. Bergerson for nearly 15 years, explained that throughout their time together they often discussed the need to teach English to Latinos in the community.

Although Ms. Leon, who also is a director of the program, learned English by working with English-speaking clients and taking classes at Suffolk County Community College, she understood that many people have work and families to care for and are unable to travel to Riverhead, where a class is held a few times a week. In fact, it was a struggle for her.

“I would have liked to keep going to school to keep learning,” Ms. Leon said, “but with my kids and everything, it was difficult for me to keep going. That’s why I saw this as a good program.”

Together, Ms. Leon and Ms. Bergerson began initial planning and eventually approached Ms. Leon’s pastor, Oswaldo Palomo, to see if they could hold classes in the Wainscott building that houses the Living Water Christian Gospel Church and the Vida Abundante Christian Church. The response was positive.

In July 2014, textbooks were ordered and enrollment for Thursday night classes began, with 57 students the first year, a daunting number for Ms. Bergerson, who said she had never taught English before. As a result, she recruited friends with English-teaching backgrounds to volunteer.

Enrollment for the program is now at capacity, and some students even travel from as far west as Hampton Bays. Tuition for the year-round program (September through August) is $120, a fee that is used for textbooks, pens, white boards, printer ink, and other necessary items.

“It feels good knowing that you’re doing something that people need and are so genuinely appreciative of,” Ms. Bergerson said. “It warms your heart.”

Another volunteer, Ben Bijur, 17, has a unique take. Being significantly younger than most of the Latino students and the only high school volunteer, he switches gears after a day at the Ross School, where he is a senior. At Aprendiendo Inglés Ahora he is a homework helper and co-teaches some classes.

“It’s really cool how much of an influence I can have and how English is more of a barrier than age,” Ben said. “They’re just trying to learn the language that surrounds them, and it’s amazing that I can really impact their learning by just giving a few hours of my time every week.” Ben’s sentiments about the program are pervasive among fellow volunteers and directors.

“The miracle is not to have the students come to class, the miracle for me is to have all the volunteers coming to teach us the language,” Mr. Oswaldo said. “All of the Americans — teachers, professional people that are retired — who are willing to spend their time on us is just a miracle. And we really appreciate that.”