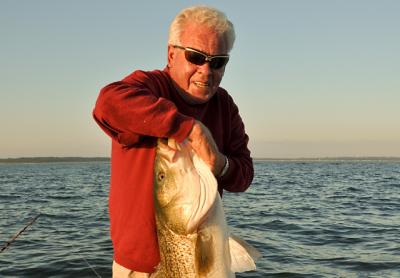 Capt. John Rade, seen here with a massive striped bass, will be honored as the Fishing Legend of the Year at the conclusion of the Montauk Mercury Grand Slam Fishing Tournament on Sunday.
By
Jon M. Diat

A survey probably isn’t needed, but if you ask just about any experienced fisherman who shuffles along in his or her weathered oilskins and deck boots among the well-used docks and boats of Montauk Harbor who is the king of rod-and-reel commercial fishing (a “pinhooker” in local slang), most are likely to agree that John Rade, better known as Johnny, is the one who wears the crown.

The legend of Captain Rade’s unique ability to catch fish runs long and deep, more than half a century on the water to be precise, and at the age of 75, he is still at the top of his game. In commercial dockside talk, he is “high-hook” for the large catch of fish he packs out for market almost every day in season.  With a quiet and respectful low-key demeanor, whether on land or at sea, Rade has a sixth sense when it comes to knowing where, when, and how to fish. Few can touch his skill set. Fishermen respect him. Fish fear him.

“He is by far the most respected man in the harbor,” said Capt. Richard Etzel of the charter boat Breakaway, who has known Captain Rade for several decades.

On Sunday evening, Captain Rade will witness firsthand the admiration of his peers when he is honored as the Fishing Legend of the Year at the conclusion of the 18th annual Montauk Mercury Grand Slam Fishing Tournament, presented by the Montauk Friends of Erin and the East Hampton Kiwanis Club.

Previous tournament honorees selected him to receive the award. “In the history of this tournament and award, Johnny is one of the most deserving to receive this honor and is a true legend in Montauk,” said Henry Uihlein, owner of Uihlein’s Marina in Montauk, headquarters for this weekend’s tournament and festivities. “He exemplifies what a real fisherman is by fishing by himself, on his own boat, with just a rod and reel. I’m personally honored to know Johnny. He is one of the nicest, most wholesome, and most respectful people you will ever meet.”

“I’m really surprised, but I’m very honored by this,” Captain Rade said on Saturday evening after unloading a catch of fluke at the Inlet Seafood dock in Montauk. “I just do what I do. I love fishing, especially bottom fishing. I may have slowed down a bit, but I don’t plan to stop.”

Captain Rade was born in Brooklyn, but his family moved to Montauk in 1945 when he was 2 years old. “Montauk was so simple then,” he recalled. “There were dirt roads and not many people out here, but the fishing business was getting off the ground.”

Drawn at a young age to the buzz of activity around the party and charter boats docked at Fishangri-la at the southeast end of Fort Pond Bay, where loads of New York City anglers would head after getting off the Long Island Rail Road, Captain Rade became a dock rat early in life. “I would do anything, like help clean fish,” he said. “It did not matter. I just loved being on the docks or on the water.”

After graduating from East Hampton High School, Captain Rade joined his father, and older brother, Richard, running the family-owned Marlin II party boat for 15 years. “We were mainly a porgy boat, but we also did a lot of early spring fishing for cod,” he said. “There used to be some incredible cod fishing around Montauk and Block Island.”

Captain Rade continued to sharpen his fishing prowess by working on other charter and party boats, including the Jigger II with Capt. Howie Carroll and with the Forsbergs on their Viking boats. He also fished and worked closely with Johnny Kronuch Sr., who owned Johnny’s Tackle Shop in downtown Montauk with his son for over 70 years.

“I paid attention and learned so much by working with all of these different people and boats,” he said. “I learned about tides, the moon phases, where and when to go, what baits worked best. I tried to absorb and study it all from everyone and I really tried to think like a fish, especially bottom fish like fluke, porgy, sea bass, cod, flounder, and blackfish.”

Taking that wide knowledge base and experience, Captain Rade took the plunge to go independent and bought a 16-foot skiff to fish with a rod and reel by himself. It’s a decision he does not regret. He is now on his fourth boat, a fiberglass 26-footer. While his boats have varied in size up to 32 feet, there has been one constant in all of the craft he has owned over the years. All have been named Starfish.

“I saw that boat name in a James Bond movie and it has stuck with me ever since,” he chuckled. “It’s a simple name, but I like it.”

When not on the water, Captain Rade has also worked at Inlet Seafood for the past 30 years packing out fish. “I guess it’s pretty clear that I was built to be working on the water,” said Captain Rade, who also happens to be an enthusiatic birdwatcher. Those fishing genes have been passed on to his son Brian, who gillnets monkfish and traps for lobster. His daughter, Judith, is a special education teacher at the Montauk School. Karen, Captain Rade’s wife of 49 years, retired as the director of the Montauk Library in 2014.

“I love Johnny, his family, and I wish I had all of his fishing knowledge,” said Capt. Dave Aripotch, owner of the commercial dragger Caitlin Mairead, who has known Captain Rade since the early 1970s, when they did some gillnetting together. “It’s all of the little odds and ends that he knows. He catches fish like no other person I’ve ever seen. And he works as hard today as he did 30 years ago. Look at the great shape he is in. He is tireless and just a great man.”

When asked if he plans to fish on Sunday, the day he is to be honored, Captain Rade replied that “unless the weather is really bad, I’ll be out there. But I will pack my catch out and get to the ceremony in time. Don’t worry.”

Hail to the King.