­23 Successes in ‘A Radical Voice’ 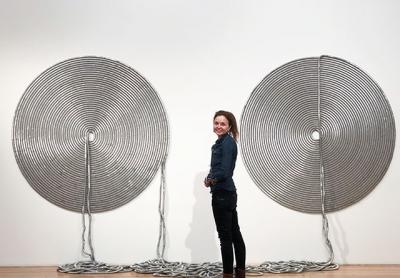 "A Radical Voice: 23 Women" includes work by Alice Hope, above, with her spiral sculpture made of can tabs and tubing.
Daniel Gonzalez
Both smart and aesthetically inviting
By
Jennifer Landes

Some art exhibitions are smart and some are more aesthetically inviting — not just pretty, but captivating — featuring objects that draw one in from across a room. “A Radical Voice: 23 Women” is both.

Janet Goleas, an artist and curator, intimately understands artistic impulse and when that impulse results in successful works of art. There are 23 successes on display at the Southampton Arts Center, on view through Sunday.

Part of what makes the work in this show so compelling is its underlying motivation. Ms. Goleas said recently that she was asked last year to come up with an idea “that would reflect the world we live in now.” Against a backdrop of women revealing struggles in their work life after years and decades of silence, it became evident to her that artists, particularly women, have traditionally had to scramble and juggle multiple responsibilities to carve out the regular time they need in the studio to create work and fortify their voice.

According to Ms. Goleas, artists often need to close themselves off to develop depth and complexity in their work. “When an artist is working, they’re researching. If you lose that thread of research, you have to start all over again.” Having an uninterrupted stretch of time “reveals things you can’t always get” when you are dipping in and out of a studio practice. “Like with scientists, intense research reveals truth.”

Almond Zigmund spoke to The Star before the show opened and said she had recently returned to the studio after a period of employment at the Watermill Center. One of the reasons she took the job was to have some distance from the studio, to shake up things. Ms. Goleas gave her half of the center’s entry hall for an installation. The strategy worked. Although Ms. Zigmund has always employed light and space in her installations, there was still a great deal of control apparent. Her latest piece, installed on-site with little preparation in the studio, was an experiment in letting go for her. As usual, there is a mix of wall and sculptural elements with an emphasis on pattern, but the overall feeling is more emotive, less precise.

Alice Hope, who has a solo exhibition at East Hampton’s Guild Hall through this weekend, is present here. A hanging piece of gold-toned can tabs goes from lintel to floor and looks almost like seaweed or some other organic material. She has worked with can tabs for a few years, and now seems to be refining her approach. Once satisfied with exploring the aesthetic properties of this commonplace functional item, she has gone to another level in adapting its properties as a medium. In the tight coils of the two pieces placed on the back wall of the last gallery, she has hidden them in plain sight. Yet, she reveals them again in allowing the tubing that holds them in place to fall to the floor, giving the viewer a better apprehension of the components.

This kind of seriality can be seen elsewhere in the galleries in the work of Laurie Lambrecht. Included here are 12 photographs printed on linen called “Bark Cloths,” which have added texture from embroidery. Using organic and natural subject matter in this way, she has produced a hybrid that keeps referring to itself in profound ways. Her choice to print on fabric upends the historical pecking order of photography and other works on paper compared to paintings on canvas or panel and even sculpture. In this grouping, she has transformed her images into objects, but modest ones, simply tacked to the wall with no mat or backing required.

A similar organic and serial approach can be seen in the stoneware piece “Justified” by Toni Ross. A byproduct of her never-let-anything-go-to-waste studio practice, these pieces are formed from scraps of other works. Once only shown vertically, she has recently begun constructing them horizontally, as in the 2016 Parrish Art Museum exhibition “Artists Choose Artists.” As she told The Star last year, this format gives the work movement and the quality of words on a page or “musical pauses and elevations.”

Process is key in all of these artists’ works as it is in the work of Drew Shiflett. She takes her own handmade paper as a launching point, and then pulls out patterns or creates them with mediums such as watercolor, crayon, pencil, and, in these cases, canvas or cheesecloth. Much like Ms. Lambrecht’s works, these still-delicate examples assert structure and endurance, not asking for gravitas so much as claiming it.

Other departures include Bonnie Rychlak, who with Jeanne Silverthorne is showing work that defies the expected. In “Grate of Unintentional” there is familiarity in her cast and carved-wax grate. Ms. Rychlak has emphasized form over function in the past. Here, the grate’s function is highlighted with a plastic pipe with drawn droplets of water attached to it by a string. While these elements highlight the utility of the subject matter, they also encourage viewers to speed past that interpretation to an emotional response.

Their videos titled “Consequences” give off a nostalgic, “Fluxus” air. When installed, video works are so often disruptive, with dedicated viewing areas, flowing black curtains, cutouts in walls, or at least large high-definition screens that take up lots of wall space. These compact pieces — one of which uses a simple hand trick and sniffling noises to simulate crying — are displayed on tiny personal DVD players set on a pedestal. The artists send so many mixed messages in how to interact with them that the choice to become their witness is a resolute act. Video is rarely part of the East End creative parlance. While it can easily overwhelm, it would be wonderful to see more of it here.

With 23 artists, there is no way to get to all of them in detail, but the contributions of Olive Ayhens, Amanda Church, Martha Clippinger, Connie Fox, Regina Gilligan, Tamara Gonzales, Jacqueline Gourevitch, Lisa Hein, Priscilla Heine, Hilary Helfant, Elana Herzog, Judith Linhares, Erika Ranee, Judy Richardson, Zina Saro-Wiwa, and Jude Tallichet are no less. With so many things happening this weekend for the Hamptons Arts Network’s THAW Fest, this exhibition should not be missed.