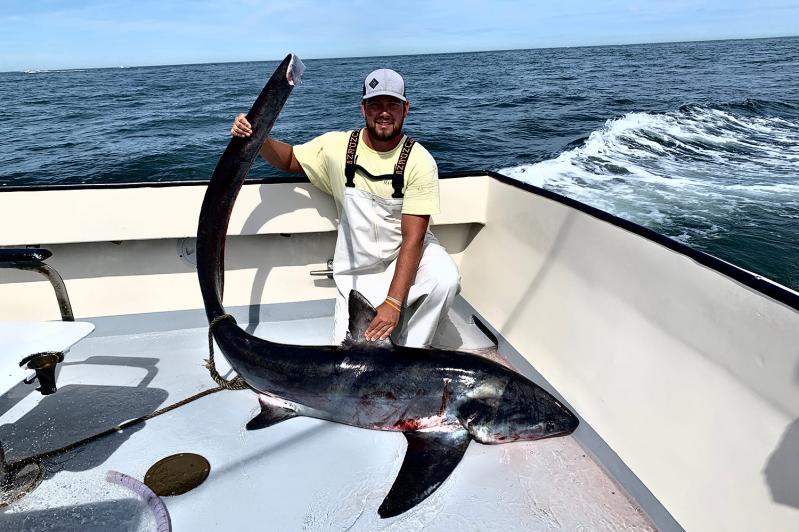 Thresher sharks have been plentiful this summer. This 200-pounder was landed by Michael Cole on the Sea Wife IV out of Montauk.
Capt. Tom Cusimano
By Jon M. Diat

It felt like only yesterday that we were all celebrating Memorial Day in joyful unison. The summer season was upon us. Time to relax and take in the lazy, hazy days of sunshine, fishing, barbecues, and beaches. But, while the calendar technically states that it is still summer, the party is over for many people. It went fast, too fast for me.

Even on getaway Monday, the difference was readily visible in all of the villages. Peace had broken out everywhere. Stores, which only a few days prior were filled with overly exuberant and highly agitated people, were now mostly vacant. Luxury cars, lined up bumper-to-bumper on Sag Harbor’s Main Street on Sunday afternoon, many with horns blaring, were now silent. Luxury yachts moored in Smith’s Cove off of Shelter Island and west of Barcelona Neck were ready to set a course for warmer climates for the winter season. The page has been turned. A sense of normalcy prevailed.

“It was a short, really busy summer,” said Harvey Bennett, the longtime owner of the Tackle Shop in Amagansett, from behind his counter on Monday morning. “I’m very tired. I think we are all very tired. After every Labor Day, we always say it was the busiest ever. And this was really true this season. People were here, there, and everywhere. I need some time away to recuperate.”

“No doubt, it was a crazy summer and the traffic was really unbearable,” said an equally tired Ken Morse at Tight Lines Tackle in Sag Harbor. “I know I lost some business, as there were times people just couldn’t tolerate the traffic to get to my shop. It was that bad at times.”

Before taking a much-needed rest, Bennett said that the fine late summer weather has also produced some excellent fishing. “There are bluefish all over the ocean beaches with fish up to five pounds, plus some small stripers. Best lures have been small diamond jigs and tins,” he said. “A few pods of false albacore have moved in on the south side and towards Gardiner’s Bay, and the fishing for bonito has been very consistent for the light tackle guys as well. There are also some Spanish mackerel around.”

For the bottom-bouncer crowd, the veteran tackle shop owner said that blowfish, kingfish, snappers, and porgies are plentiful from Fort Pond Bay in Montauk all the way westward to the Sag Harbor area. “There are still some fluke off of Napeague, but the best results have come from the south side off of Montauk drifting in 50 to 75 feet of water,” he added. “It’s now September; it’s time to grasp that fall is right around the corner.”

Back at Tight Lines Tackle, Morse said that bottom fishing for weakfish, kingfish, and porgy remains solid in the bays, with snapper blues still in residence at Jessup’s Neck to the west of his shop. “Bigger blues are being taken in Plum Gut and the Race with a few small bass in the mix. Sea bass fishing has been good in Long Island Sound too.” Note that as of last Sunday, recreational anglers can now retain seven sea bass over 15 inches. The previous limit was three fish.

Sebastian Gorgone at Mrs. Sam’s Bait and Tackle in East Hampton also agreed that the crowds this summer were massive, but that proved to be a boon for business. “The weather was great this summer and it brought out a lot of fishermen and kids,” he said. “I can’t complain about it.”

As for the fishing, Gorgone was excited about the consistent catches of blowfish, porgy, sea bass, snappers, and kingfish. “Blowfish are still going bananas,” he said. “Fishing either inside Three Mile Harbor or just outside the inlet has been just fabulous for a wide variety of fish.” Gorgone added that small bass and bluefish are keeping anglers occupied along the ocean.

Out at Montauk, many anglers are gearing up for the September migration of large-size fluke. Drifts under the radar dome at the still mysterious outpost at Camp Hero in 60 feet of water have already produced some fish up to 13 pounds, while deeper areas near Rocky Hill, Cartwright, and the Frisbee grounds have seen their fair share of large doormats as well. So long as hurricanes and deep ocean swells don’t develop, the season, which ends on September 30, should continue to be productive.

While still on the topic of fluke, Emily Bruno is the new leader in the season-long Montauk Youth Fluke Tournament. The youngster landed a hefty 7.5-pound flattie last week. A nice fish for sure.

Looking to fill up the freezer for winter with porgy fillets? For those fishing from a licensed party or charter boat, the daily possession limit for the popular fish increased last Sunday from 30 to 50 fish over nine inches in length. Fishing from your own craft? The limit remains at 30. Montauk and other nearby locales are thick with the tasty fish.

And now for something completely different. While they’re more common in winter months, cod have been taken in good numbers to the south and east of Montauk of late.

“Thank God for cod and hallelujah for haddock,” exclaimed Capt. Tyler Quaresimo of the Simple Life, a Montauk charter boat. On Saturday, the young skipper put his fares into a handful of tasty haddock up to six pounds, as well as a mess of teen-size cod and a lunker that tipped the scales at over 25 pounds. “It was the best day of cod fishing yet,” he smiled. “And we fished in T-shirts. It does not get much better than that.” Summer is clearly not over for Quaresimo.

Whale ho! Want to see whales? The seemingly never ending whale show that many have witnessed most of this summer continues without abatement along our local ocean beaches. Taking a trip to Sagg Main beach in Sagaponack on Saturday, I saw about a dozen of the giants gorging on the vast schools of bunker close to shore. It was a lunchtime buffet of epic proportions for the humpbacks and finbacks frolicking on the surface. Sea World, live and local, no admission required.