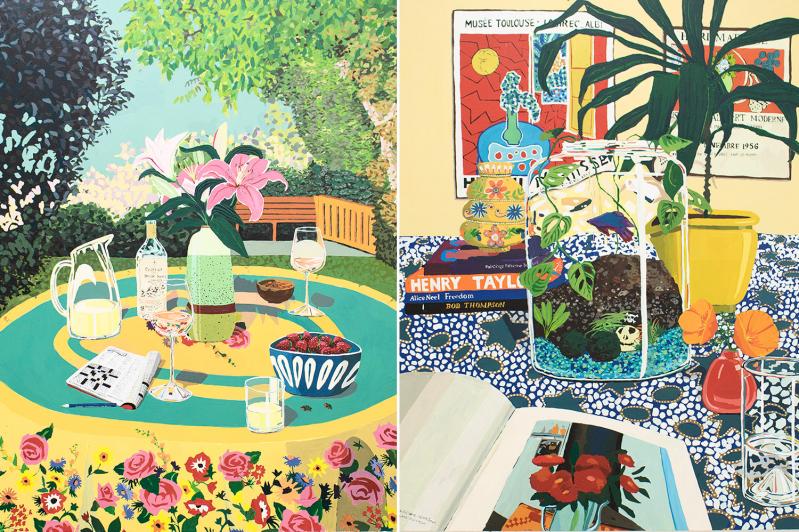 It’s easy to fall in love with the work of Hilary Pecis at Halsey McKay Gallery in East Hampton. Judging by the many paintings already sold there, quite a few have.

The bright acrylic colors express themselves primarily as sun-filled interiors, but also occasional landscapes. The compositions are loaded with patterns that tend to block a way in, whether the bottom edge is a truncated view of a table or the tiny corner of a pool or pond’s border. It is a distancing device that makes the views seem more like complicated sets.

Although more realistic than Max Weber’s and less abstracted than Paul Cozen’s, her compositions share the same flattened presentation of space, with their components in danger of tumbling out of the picture plane. Her scale is often easel-sized rather than monumental, which is also reminiscent of early-20th-century modernism.

The paintings look deceptively simple mostly because there is too much to take in at first glance. Tablecloths, rugs, art books (sometimes open to specific illustrations), paintings on walls, glassware and ceramics, liquids, shadows, and light all become part of the mix.

In some cases, the indoors is brought outside, as in “Outdoor Table,” in which the table covering, glassware, ceramic vase filled with lilies, wine bottle, pitcher, and bowls of strawberries and nuts look transported directly from indoors without thought to breakage. It is an elegant scene set in a garden, with poured glasses of rosé wine and another glass bearing something from a nearby pitcher. Rather than a party, a crossword book open to a completed puzzle and a pencil next to it point to more of a leisurely afternoon.

Humans are rarely in Ms. Pecis’s paintings and none are evident in this selection from this year. Yet they seem just on the edges, ready to enter the room and move a chess piece, take a sip from a paper coffee cup, or maybe sit down in a sunny corner of a “Clinton Hill Apartment.”

“Dogwood,” her small nature study, is an easier read. It could be a tree, but the branches are pointing upward as if in a vase. Filling in the foreground behind the large blooms are lots of small visual echoes on tinier branches, but they are so close as to not adhere to basic rules of perspective. This painting, with its very simple subject matter, is a kind of visual key to her other work. The artist seems to be stating what is important to her work in general, the layers upon layers, a scene not literally re-presented but a riff on it, often infused with subtle wit.

Her earlier work was more complicated, but a move to Los Angeles in the last few years and a loss of studio space forced her to look closer at the spaces around her for inspiration. In doing so, she is not trying to be ironic or add a conceptual spin. As she told the news website SFGATE, “Before, with my work, I was trying to make something new, a new environment or new landscape. . . . With the current work, I’m not trying to do that, and I’m not trying to say something profound. Something that’s been of interest lately is just being sincere and being honest about making the work.”

Her care and detail in the interiors she captures — bending and abstracting art posters, a tablecloth, books, and a nearby plant through a fish bowl or other patterns through a glass of water — point to traditional painting conventions while filtering them through a modern sensibility. And that is likely why it is so popular. It is a soothing reflection on the spaces we call home and the moments we steal from a hectic and stressful environment.

The show has been extended to Oct. 5. Matthew Kirk’s “Mountain Skin” is on view in the upstairs gallery.