In Montauk, ‘if you double the length of the project, you quadruple the lifetime’ 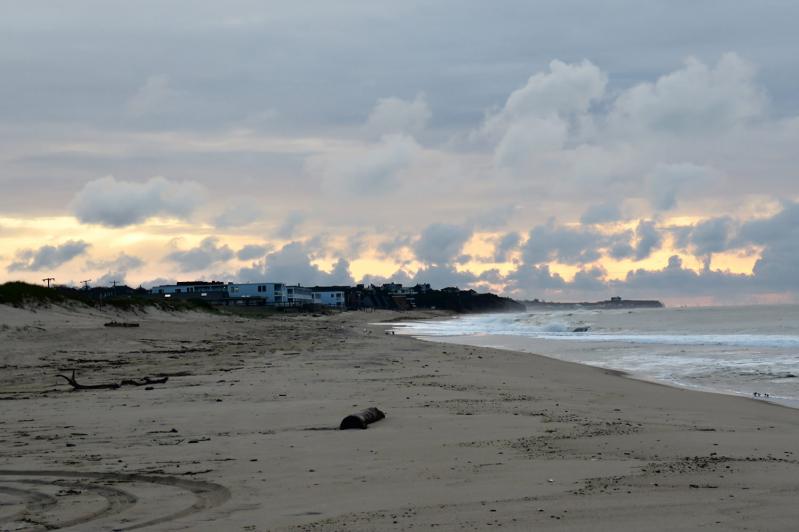 First Coastal Corporation, which is conducting a beach renourishment funding feasibility study, is looking at a project that would double the length of the one the Army Corps of Engineers plans for the downtown Montauk beach, extending it from Ditch Plain in the east to Hither Hills State Park.
Jane Bimson
By Christopher Walsh

Residents and visitors alike are willing to pay for the preservation of Montauk’s ocean beaches, the East Hampton Town Board was told on Tuesday, and both groups are amenable to either a property tax or a lodging tax to finance a wide, healthy beach.

Aram Terchunian of First Coastal Corporation, which earlier this year was awarded a contract to conduct a beach renourishment funding feasibility study, articulated a project that would enhance and lengthen the Army Corps of Engineers’ planned renourishment of downtown Montauk’s ocean beach, which is scheduled for 2021, by creating four discrete zones within a single erosion control district that would stretch more than four miles, from Hither Hills State Park to Ditch Plain.

One year ago, the town board, at the urging of the Montauk Beach Preservation Committee, agreed to spend approximately $50,000 for the feasibility study that would draw potential boundaries of an erosion-control district and explore funding mechanisms. First Coastal was awarded the contract earlier this year.

The Army Corps’s initial beach restoration project, calling for 450,000 cubic feet of sand across 6,000 linear feet of the downtown shoreline, is federally funded, but the town must share the cost of the subsequent 30 years’ maintenance, or around $1.2 million every four years. “There’s a need to determine how that local cost share would be paid for,” Mr. Terchunian said.

But there is also an opportunity to widen the project’s scope, he said, a move town officials favor, given that the Army Corps’s proposal falls short of the restoration effort they had hoped to see. “One of the largest costs in any one of these projects is the mobilization of the dredge,” Mr. Terchunian said, citing an approximately $4.2 million price tag for the Corps to mobilize a dredge “before the first grain of sand” is excavated. “If there is a dredge onsite and you can piggyback these other projects, you can spread that mobilization charge over a much larger volume of sand, and therefore the cost per cubic yard is reduced.”

Moreover, “if you double the length of the project, you actually quadruple the lifetime of the project,” he said of beach renourishment efforts. He referred to First Coastal’s 2014 project to rebuild nearly six miles of ocean beach from Sagaponack to Water Mill. “Five years in, we have 96 percent of the material placed in the system,” he said.

In Montauk, the first zone, or sub-reach, would stretch from the Wavecrest Resort, at 170 Old Montauk Highway, to 396 Old Montauk Highway. The next would stretch east to South Eton Street, at the western edge of downtown, and encompass the approximately 400 par­cels comprising the Montauk Beach Property Owners Association. A third would extend from South Eton Street east to Shadmoor State Park, and a fourth from there to the Montauk Shores condominium complex at Ditch Plain.

As the sub-reaches mapped by First Coastal differ, so would the restoration effort in each. Of a stretch between downtown and Ditch Plain, spanning Shadmoor State Park, “to do a 6,000-foot restoration project . . . that’s about a $15 million project,” Mr. Terchunian said. It is probably less clear to the public, Supervisor Peter Van Scoyoc said, as well as to the town board and perhaps even the Montauk Beach Preservation Committee, as to the type of restoration work that would happen in areas not imminently imperiled by erosion, as the downtown beach is. In the second sub-reach, for example, “There was discussion about removal of invasive species, which are taking over the bluff crest, as well as public access improvements along that area. At this point, I don’t know what, beyond that, might be contemplated.”

The plan also presents “a small challenge,” Mr. Terchunian said. If a special tax district is created, residents of each sub-reach would benefit from, and pay for, a distinct project. “The question becomes . . . can we do that in a single district? Because it makes life easier for the town if you have one district, administratively, as opposed to having four.” The distinct sub-reaches make sense “from a demographic, geologic, and geographic point of view,” he said. “Now, we have to see if they work from a legal point of view.”

First Coastal’s study was informed by the 422 participants in a seven-question survey conducted over the summer, which included in-person queries on the beaches and a card left at motels and resorts. Residents and visitors were consistent in their answers, Mr. Terchunian said. Half of respondents said a tax assessed on lodging, be it a motel or rental via Airbnb, would be the most effective funding mechanism. Twenty-seven percent favored a property tax.

Three-quarters of respondents would be willing to pay a higher rental price to maintain a wide, sandy beach, he said, and nearly 80 percent said that a “beach preservation fee” on their cost of lodging would not dissuade them from vacationing in Montauk.

But where an erosion control district, created by way of a permissive referendum, would be within the town’s control, a lodging tax, Mr. Terchunian said, would be created by the State Legislature, approved by the governor, collected by the state, and finally dispersed through the county, “a much different and more cumbersome process” over which the town would have little control.

Nearly 85 percent of respondents said a wide ocean beach is “extremely” important, and Ditch Plain is the most popular of the hamlet’s beaches, according to the survey.

The same survey will now be sent to all of the residents within the defined erosion control district, each tailored to the particular sub-reach and including an estimated tax liability based on a property’s assessed value. Surveys can be returned by mail, fax, email, or via a QR barcode. Public information sessions will follow, Mr. Terchunian said, and First Coastal will then return to the board with its findings and recommendations.