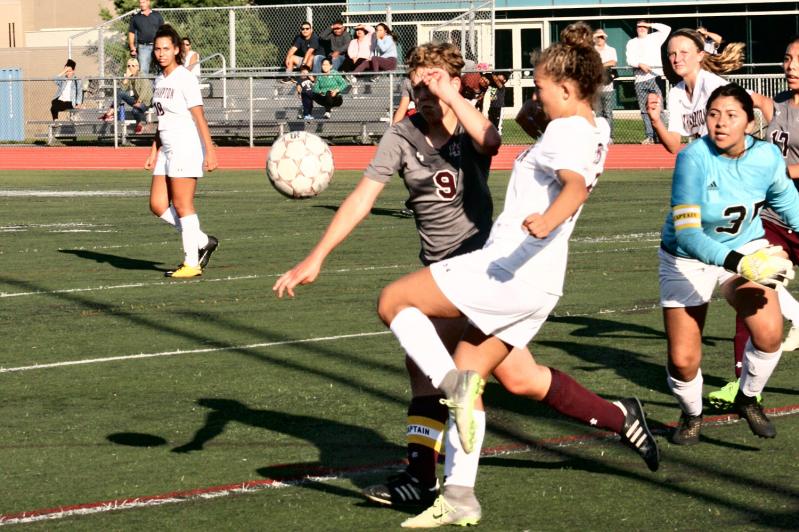 Alden Powers (9) came close to tying the game after Southampton had taken a 1-0 lead in the first half of Monday’s game here, but the Mariners managed to clear the ball.
Jack Graves
By Jack Graves

Soccer is one of those games in which the better team often doesn’t win.

That was the case Monday when, in a girls game played here, Southampton emerged as a 1-0 winner, thanks to a fluky first-half goal. Other than that, the Bonackers, who were the better ball-handlers, had the ball in the Mariners’ end “about 80 percent of the time,” in the words of Cara Nelson’s assistant coach, Joe DiGirolomo.

But when scoring opportunities presented themselves, in the form of breakaways or corner kicks, they couldn’t put the ball in the net. “You’ve got to be hungrier,” DiGirolomo said, and Nelson agreed, even though both coaches said they were proud of the way their charges had been practicing and playing of late.

In parting, Nelson said the second annual Battle of the Bonackers soccer game matching teachers against students, a benefit for Kick Out Cancer, is to be played on the high school’s turf field on Thursday, Oct. 3, at 4:30 p.m.

East Hampton’s boys were almost similarly victimized in a game with Rocky Point here Friday. The Bonackers were utterly dominant in the first half, at the end of which they led 1-0, though it could just as easily have been 3-0 given the fact that close-in shots, by Alex Vanegas and Matthew McGovern, had clanged off the near post in Vanegas’s case and off the crossbar in McGovern’s.

But Rocky Point switched to a more straightforward attack in the second half, Don McGovern, East Hampton’s coach, said, keeping the ball in the air, which was to the liking of its taller, bigger players, and thus evened the count. An overtime period followed, although it was getting hard to see. Fortunately, East Hampton pulled it out 2-1, thanks to a goal by Jonathon Bautista.

In other high school sports this past week, the very young golf team debuted at the Noyac Golf and Country Club with a 6-3 win over Pierson, the all-important 3 points awarded the team with the lower aggregate score going East Hampton’s way by one stroke.

The girls tennis team defeated Southampton here Monday 6-1, but lost 4-3 at William Floyd Friday. Floyd won at first, second, and fourth singles — in three-setters at one and four — and won at third doubles as well. East Hampton’s winners were Eve Marsden at third

The girls swimming team, which was to have made its home debut at the Y.M.C.A. East Hampton RECenter Tuesday, lost a mandatory nonleaguer to Ward Melville, the defending county champion, by a score of 100-79 last Thursday.

“Our girls competed very well and there were many close races,” East Hampton’s coach, Craig Brierley, said in an emailed account. “Both 200 relays took second and third, while our 400 relay took first.”

“In the 200 freestyle, Olivia Brabant and Corrina Castillo went two-three, and in the 200 individual medley Jane Brierley took second. Sophia Swanson won the 100 free, with Darcy McFarland third. Julia Brierley, McFarland, and Caroline Brown went two-three-four in the backstroke, and Jane Brierley won the breaststroke. However, Ward Melville had too many firsts, as well as three divers, which earned them 13 points.”

Emily Dyner, a sophomore who “always accepts a challenge,” and who competed in five events that day, was named as the swimmer of the meet.