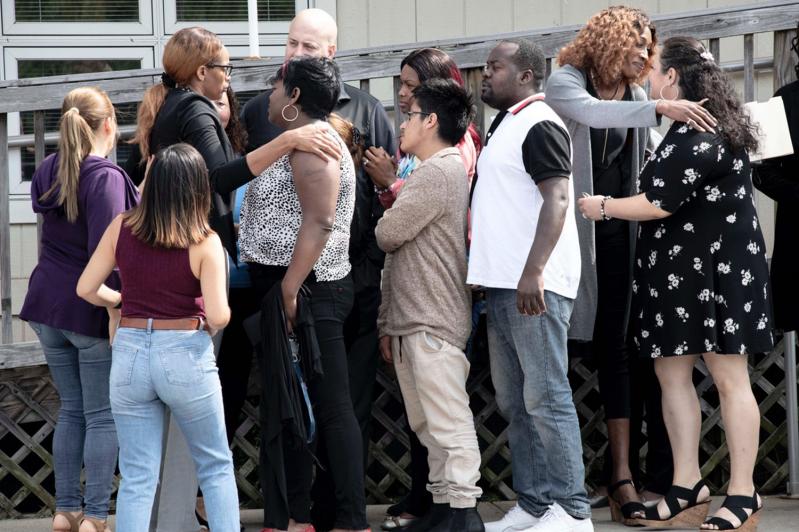 Patchita Tennant, at left, hugged supporters who attended Southampton Town Justice Court with her last Thursday, just two days after they chipped in to post a $500,000 bond.
Doug Kuntz
By Taylor K. Vecsey

The manager at the CVS pharmacy in East Hampton Village, who was accused earlier this month of shooting her boyfriend at their home in Flanders and then fleeing with their 3-year-old daughter, was back in court last week, flanked by a dozen supporters.

Patchita Tennant, whose friends and family came together to post a $500,000 bond for her, was released from the county jail on Sept. 10. She was already scheduled to appear last Thursday in Southampton Town Justice Court.

Justice Barbara Wilson modified the order of protection she had issued for the child to allow a Family Court judge to decide whether Ms. Tennant can have contact with her toddler, who as of last week was in the custody of an aunt. Ms. Tennant’s attorney, Austin Manghan, said the family planned to ask the Family Court judge for supervised visitation.

An order of protection for Ms. Tennant’s boyfriend, Andrew Mitchell, who she claims was abusive, was also modified to allow her to go back, once, to their house to retrieve clothing and toiletries.

Ms. Tennant has not been indicted. Mr. Manghan said he was waiving her right to a speedy trial so that both sides can further assess the situation. “There is no argument that she shot this guy,” the lawyer said last week. “The issue is whether there is a legal defense.”

Family and co-workers hugged Ms. Tennant after the court proceeding last week. “Her record [at CVS] is so amazing. There were a ton of CVS workers there — 30 or more people in the courtroom,” Mr. Manghan said.

Ms. Tennant is due back in Southampton Justice Court in November, though Mr. Manghan said his client would likely be indicted by then. If so, the case will be transferred to Suffolk County Criminal Court.