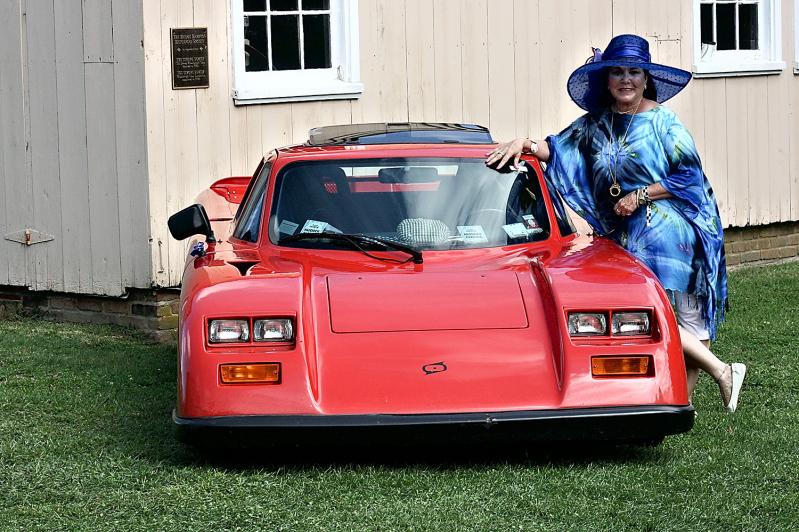 Terry Dunne of Lime Rock, Conn., drives the Consulier once owned by John Fitch up and down the East Coast to Eastern Motor Racing Association events.
Jack Graves
By Jack Graves

A century of sports car racing in Bridgehampton, on the roads and at the track, now the site of The Bridge golf club, was celebrated this past weekend, first in an invitation-only Pebble Beach-like concours d’elegance show of vintage, antique, and classic autos at the club Saturday, and the next day, in a well-attended event open to the public, at the Bridgehampton Museum.

Asked if this were a fair price, the restorer and owner, Andrew Schaefer of Sag Harbor, who still has his first car, a 1965 Mustang that his grandparents bought new, said it was.

When it came to restorations, Schaefer, whose restoration, service, and sales shop is in Quogue, said, in answer to another question, that he provides potential customers with accurate estimates up front. He likes to work within a budget, rather than work at an hourly rate, as some restorers do, he said.

Schaefer’s 16-year-old son, Andy, a Pierson High School junior who works with his father in his free time, and who wants to go to a college where he can major in auto restoration, will undoubtedly draw attention when, beginning in November, he can drive the supercharged 2006 Roush Mustang he garages at the moment, to and from school.

Asked if he’d gone to The Bridge event, Andy said he had, and while there’d been more cars there, they were of similar quality as the scores parked in front and in back of the museum that morning.

Bob Stokvis, a Bridgehamptoner who brought a 1939 maroon “Penultimate” LaSalle convertible coupe to the grounds — penultimate for the fact that it was the next-to-last year that General Motors’ Cadillac division produced it — directed his interviewer’s attention to its torpedo headlights, waterfall grille, banjo steering wheel, folding opera seats in back, and to its Willkie for President rear plate topper.

“Did you vote for him?” he asked good-naturedly.

“And you’ve got some rust to prove it, I presume.”

Concerning General Motors, Stokvis said the head of G.M., Alfred P. Sloan, had been “a marketing genius,” providing consumers with a panoply of upgrades — beginning with the entry-level Chevrolet, and ascending through Pontiac, Oldsmobile, Buick, Cadillac, and LaSalle — as alternatives to Henry Ford’s Model T, which, when Sloan began filling in pricing gaps, owned 50 percent of market share.

Pretty soon, the LaSalle owner said, everybody, including Ford, with its introduction of the Model A in the late 1920s, was following suit.

Jeff Einhorn, a New York City attorney who four years ago teamed with Shamin Abas, owner of a public relations firm, and with Robert Rubin, The Bridge’s owner, to bring a concours d’elegance to The Bridge — more than 260 vintage, antique, and classic cars were there this year — said he has for the past three years included the public the next day at the museum, “which, beginning with a dinner for the participants on Friday, makes a full weekend of it. . . . The whole idea is to celebrate racing here,” said Einhorn, who is neither a golfer nor a sports car racer, though he has a 2012 McLaren 12C.

Bruce McLaren, who died young test-driving one of his cars in England, raced at Bridgehampton, as did the legendary sports car racer (first at Sebring, third at Le Mans) John Fitch, whose numerous inventions have improved driving safety, and whose Warren Mosler-manufactured Consulier is now owned by Terry Dunne, another of the show’s attendees.

“He raced for Mercedes-Benz for 18 years,” she said. “This was in the 1990s the fastest production car of its time. . . . I live in Lime Rock [a race course that Fitch laid out and managed], and, yes, I drive it all around. I’m an EMRA [Eastern Motor Racing Association] steward. I drive it up and down the East Coast.”

The homage to Bridgehampton racing is to continue with an Oct. 5 road rally and tour over a course — including roads in Southampton, Sag Harbor, and Springs, though not in Montauk — that Julie Greene, the museum’s archivist and curator, has laid out.

“It’s the rally’s 28th year,” she said. The day before, she’s to put up a road marker near the Bridgehampton Presbyterian Church attesting to the fact that road races began being held on the hamlet’s streets in 1914.

Rally applications can be had online through bhmuseum.org.