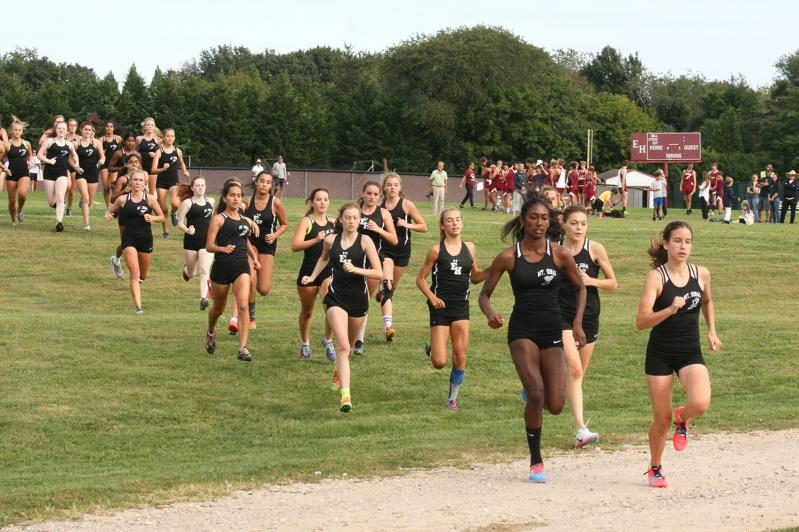 That’s the state Class B champion, Sarah Connelly, at the right as the first-ever cross-country race at East Hampton High School got underway on Sept. 10.
Jack Graves
By Jack Graves

For the first time in a long time East Hampton High’s boys and girls cross-country teams were front and center here on Sept. 10, running two loops around the high school against their Mount Sinai peers.

Glamping (glamorous camping) on part of the school’s home course at Cedar Point County Park had occasioned the move to the high school, and it proved to be serendipitous, for Joe Vas, East Hampton’s athletic director, was reportedly so taken with it that a homecoming meet with Southampton, and perhaps with one or two other schools, may be held here on Oct. 3 should Section XI, the governing body for high school sports in Suffolk, agree.

And, ultimately, the 2.5-mile high school loop that Kevin Barry, the boys coach, laid out may become the Bonac teams’ home course.

“Cross-country hasn’t been getting much exposure here,” Diane O’Donnell, the girls’ coach, said, alluding to the fact that in recent years, aside from one appearance each fall at Cedar Point, most of the East Hampton teams’ meets have been at Sunken Meadow State Park in Kings Park, an hour and a half away, with occasional appearances at either Indian Island County Park in Riverhead or at Red Creek Park in Hampton Bays.

Mount Sinai predictably won the boys and girls races, though not by overwhelming margins. The outcome of the girls race was a foregone conclusion inasmuch as Mount Sinai boasted the state and county Class B champion in Sarah Connelly and the county runner-up, plus a strong third-place finisher in Kaitlyn Chandrika, who ran, according to O’Donnell, “a spectacular race . . . Ava [Engstrom] and Bella [Tarbet] both beat her last year.”

O’Donnell has only seven on her squad, though they proved themselves to be competitive on Sept. 10, with Engstrom finishing fourth, Tarbet fifth, and Dylan Cashin sixth, followed by Ryleigh O’Donnell and Emma Hren, the last Bonac finisher to be scored.

Engstrom and Tarbet are juniors, Cashin and O’Donnell are eighth graders, Hren is a sophomore.

The twice-around races began not far from the softball field’s right-field fence and took the runners down and around the junior high soccer field, past the raised turf field, and around the outer practice fields in counterclockwise fashion before looping back behind the softball and the baseball fields toward the finish line that was drawn across a dirt path below the varsity baseball field’s right-field line.

Connelly led wire to wire, finishing in 15 minutes and 8 seconds.

Evan Masi, an East Hampton sophomore, was first across the line in the boys’ race, in 13:17, “a very good time,” according to Barry, who had expected him to do “around 14.”

It goes without saying that both times were course records, and almost without saying that the Mount Sinai and East Hampton teams found the fast and flat course to their liking, Sunken Meadow and Van Cortlandt Park in the Bronx, where invitational and regional meets are held, being quite hilly.

Barry’s got a large squad this fall, 20 in all, of whom 11 are sophomores. Two of the four seniors, Frank Bellucci and Nicolas Villante, are the team’s captains.

Amari Gordon, a Bonac sophomore making his cross-country debut that day, was fourth over all; Aidan Klarman, also a sophomore, was seventh; Bellucci was 10th, and Villante was 12th. Those were the scorers. Emilio Flores, a senior, was 14th, Isiah Robins, a freshman, was 15th, Manny Vilar, a junior, was 16th, Henry Saar, a senior, was 17th, Cooper Ceva, a freshman, was 18th, and Colin Schaefer, a sophomore, was 19th.

At the Jim Smith Invitational at Sunken Meadow Saturday, a meet matching seniors versus seniors, et cetera, East Hampton’s sophomore boys were winners, topping 30 schools in that category. Masi “cruised to victory,” Barry said, “even though he made a wrong turn twice.” Masi’s time for the 5K was 18:09. Gordon, East Hampton’s second finisher, was 19th in 19:48, and Schaefer was 27th, in 20:07. Barry said it was the first time that Gordon and Schaefer had run on the tough Sunken Meadow course. Barry added that Klarman did not compete that day.

As for East Hampton’s girls, Engstrom placed eighth and Tarbet 14th in the junior girls 5K. Both were bested by their spring track teammate Penelope Greene, who runs cross-country for Pierson. Greene placed seventh, in 21:29.23. Engstrom finished 12 seconds behind her, and Tarbet’s time was 22:33.90.

In related news, Erik Engstrom, a county cross-country champion when a student here, was named co-Atlantic 10 performer of the week as the result of leading the University of Massachusetts team he captains to a win in the four-team Minuteman Invitational on Sept. 10. Engstrom, who added some muscle to his frame by working all summer at Deep Hollow Ranch in Montauk, was the 6K (3.7-mile) race’s runner-up, in 19 minutes and 24 seconds, two seconds behind UConn’s Eric van der Els.