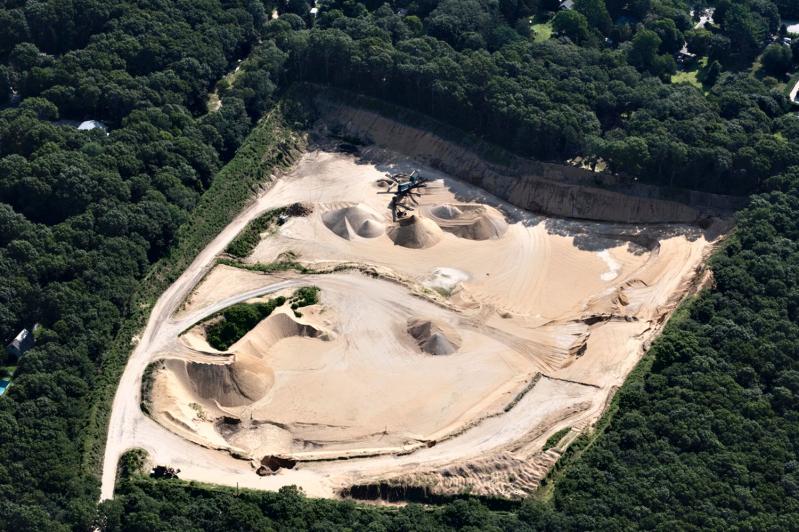 Patrick Bistrian Jr. has applied for a permit for expanded mining at a site on Middle Highway.
Doug Kuntz
By Christine Sampson

The New York State Department of Environmental Conservation has decided a proposal by an East Hampton mining company to expand a pit on Middle Highway will not have a significant negative impact on its surroundings, but the D.E.C. is still accepting public comments on the matter, through Sept. 27, before it formally decides on issuing a permit.

The East Hampton Town Board, Group for the East End, the Suffolk County Water Authority, and a coalition of about 250 local residents have all come out against the proposal, put forth by Sand Highway L.L.C. The mine is owned by Patrick Bistrian Jr. He has proposed digging a 6.05-acre lake, digging to a depth of 110 feet below the groundwater table, in order to continue mining sand and gravel there.

This is about “protecting groundwater and the quality of life in our neighborhood,” Nanci LaGarenne, a nearby neighbor, said by phone this week of her opposition to the proposal.

She drew a comparison to the situation with the Sand Land mine in Noyac, in which residents, government officials, and environmental groups have taken legal action to stop expanded mining. That matter is still proceeding through the court system.

Ms. LaGarenne called upon East Hampton Town officials to sue Sand Highway and Mr. Bistrian to stop the expansion of the mine, which has been designated a pre-existing, nonconforming facility under town code.

“There’s a danger to the groundwater and to our drinking water,” she said. “The thing about the sand pit is this is a neighborhood, a community. This is not industrial. There is no other business. To continue this and have all of these neighborhoods, houses, and children, and have giant trucks up and down the road and the giant sand pit is ridiculous.”

The East Hampton Town Board has opposed the expansion of the mine in two recent letters to the D.E.C.

“Members of the town board adamantly oppose this application, as it would not only be an environmental cataclysmic intrusion into the water table that serves as a sole-source aquifer for the entire South Fork, but is patently prohibited by the zoning code of the Town of East Hampton and thus such application must be denied by the D.E.C.,” the board wrote.

The Suffolk County Water Authority said in a letter to the D.E.C. that sand, gravel, and clay comprise a natural form of pollution prevention and filtering of groundwater and drinking water. “When materials that make up this barrier are removed, the protection of the aquifer is reduced or lost altogether,” wrote Jeffrey W. Szabo, chief executive officer of the water authority, which has two public supply pump stations near one of the Bistrian family’s mines.

“The environmental concerns that this project creates are too numerous to ignore and we strongly urge the D.E.C. to deny this application,” Mr. Szabo wrote.

New York State Assemblyman Fred W. Thiele Jr. also criticized the mine and the D.E.C. “The idea that you would remove enough sand that would expose the groundwater . . . and do it without an environmental impact statement, boggles the mind,” he said by phone. “The D.E.C. has been nothing but a rubber stamp for the mining industry for years. That’s what happened at Sand Land and that’s what’s happening here. I would say they stick their head in the sand, but there isn’t any sand for them to stick their head in.”

Mr. Bistrian could not be reached for comment by press time.

According to state records, a July 19 inspection of the mine showed it to be in compliance with its permitted length-of-mine timeline, as well as its mining area. It also complied with town code setbacks, dust and noise control rules, screening requirements, and other stipulations.

Comments about the mine may be sent to John A. Wieland, deputy regional permit administrator for the D.E.C.’s Region 1 office at the State University of New York at Stony Brook, 50 Circle Road, Stony Brook 11790. They can also be phoned in at 631-444-0365 or emailed to [email protected].