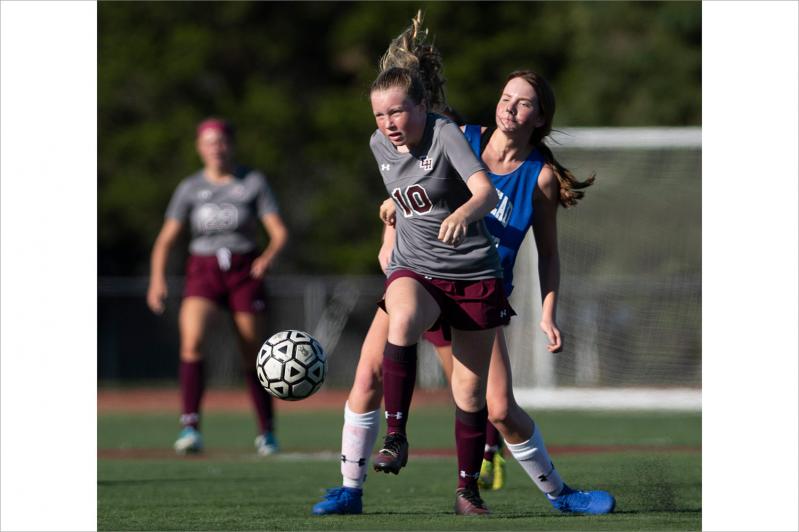 Blair McGovern and her girls soccer teammates showed themselves to be competitive in a scrimmage here with Riverhead last week.
Craig Macnaughton
By Jack Graves

East Hampton’s athletic director, Joe Vas, said during a conversation on Sept. 4 that he was looking forward to the fall season.

Just about all of the high school’s 11 teams, he said, ought to be competitive, though football’s future — he was awaiting word that day from the middle school’s football coach, Dave Fioriello, as to whether his numbers were adequate (the state minimum is 16) to field a team — is uncertain.

At it turned out, Fiorello’s numbers were more than sufficient. Vas reported last Thursday that 24 had come out for the middle school team, which used to, in the not too distant past, carry 50 or so on its roster.

Worries about the effect of concussions and repeated non-concussive hits on the brain have undoubtedly led to a falloff in the game’s popularity, though, when it comes to East Hampton, there are presumably other reasons too, a thriving soccer-playing Latino population, a full panoply of other fall sports, and the siren call of surfing being among them.

Meanwhile, Joe McKee, East Hampton’s football coach in the past several years, continues to be hopeful. Vas said there are 24 on McKee’s junior varsity squad this fall — fewer than the coach had anticipated earlier this summer, but, as is the case with the middle school team, a decent number.

The A.D. said the team’s games — with Babylon, Center Moriches, Greenport-Southold-Mattituck, William Floyd, Port Jefferson, Bayport-Blue Point, and Shoreham-Wading River — will be scrimmages, in order to provide ample rest for opposing jayvee players who suit up for their teams’ varsity contests on Saturdays.

Girls tennis, coached by Kevin McConville, the head pro at Hampton Racquet, and girls soccer, coached by Cara Nelson, were the first of East Hampton’s teams to see action — the tennis team versus Sayville in a mandatory nonleaguer, and girls soccer in a scrimmage with Riverhead on Sept. 3.

The tennis team, for which Juliana Barahona, a Pierson junior, is playing number-one, lost 4-3, dropping the top three singles and first doubles matches, while winning at fourth singles, and at second and third doubles. Girls soccer, which two years ago went winless, and which at one point last season was 5-4-1, before finishing at 7-8-1, looked to be on the upswing.

In another mandatory nonleaguer, last Thursday, girls tennis lost 6-1 to Islip, with only Barahona winning, in straight sets. Eva Wojtusiak was moved up from second to first doubles that day, with Chiara Bedini of Pierson, but they were bageled, 6-0, 6-0 by Islip’s top team.

Girls volleyball, which has a standout hitter in Mickela Junemann, and tenacious defenders in Molly Mamay and Zoe Leach, began league play on Sept. 4 at Kings Park, the team that upset it in a playoff semifinal last season, losing 3-0.

Boys soccer, boys volleyball, and field hockey were to have opened their seasons last Thursday. The soccer team, playing a league-opener at home, lost 4-1 to Half Hollow Hills West that day. Football was to have played here Monday, and the boys and girls cross-country teams, golf, and girls swimming, which has been undefeated in regular-season league meets the past two years, were to have competed Tuesday.

Golf, which shared the league title last year, has lost its number-one and two players, Turner Foster, a former county champion, and Nate Wright, to graduation, but, though Rich King’s players, among them James Bradley, who played in the national Drive, Chip, and Putt’s 12-and-13-year-old division at the Masters tournament in April, J.P. Amaden, and Trevor Stacheki, are young, they’re pretty good. Vas said there is also to be an intramural golf program this fall for seventh through ninth graders at the Poxabogue course in Sagaponack. He was trying to find someone to oversee it as of last Thursday.

Don McGovern, the boys soccer coach, has kept 25 players on the varsity team, and Mike Vitulli has 30 on the jayvee, Vas said, adding that field hockey, coached by Nicole Ficeto and Carolina Vargas Schaefer, continues to grow, with 40-plus on its varsity and jayvee, whose coach is Dana Dragone.

Homecoming, with a Hall of Fame breakfast and ceremony in the morning, is to be Oct. 5, and while football, girls volleyball, golf, girls tennis, boys soccer, girls soccer, and field hockey are all to play at home that weekend, the student council, Vas said, had picked the East Hampton-Miller Place field hockey game as its homecoming contest, to be played on the school’s turf field at 6 p.m.

Moreover, as was first announced at the senior sports awards dinner at the Clubhouse in June, games, both indoors and out, are to be live-streamed using National Federation of High Schools Network cameras this fall. “We’re set up to live-stream the indoor games, and should be set up for the outdoor games soon,” the A.D. said. The East Hampton Booster Club is sponsoring the (minimal fee) service.