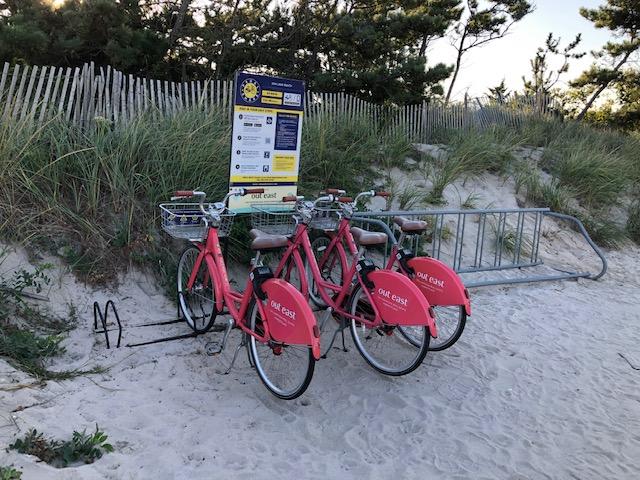 Proposals to start a bicycle-sharing program in East Hampton Village, to upgrade the septic system at Herrick Park’s bathrooms, and to redesign the parking lot at Chase Bank on Main Street, were discussed at the village board meeting last Thursday. Board members also considered the merits of a program that would allow the village to purchase its energy directly from suppliers rather than through utility companies.

Under a C.C.A. program, said Mr. Raacke, instead of the utilities deciding which suppliers would provide power, the village, either on its own or in conjunction with East Hampton Town and Southampton Town, would assume that role.

A C.C.A. administrator, he said, would engage in energy planning and enter into long-term contracts with suppliers, while the utilities would still deliver and maintain the distribution system, and bill customers. By having more control over energy supply, he explained, the village could prioritize more environmentally friendly forms of power generation such as solar and wind.

Whether joining a C.C.A. program would lower costs would not be known until the village received proposals from energy suppliers. “We may have lower electric rates, we may not, it depends on the market and we should not guess right now,” said Mr. Raacke.

The state law that created the C.C.A. model, he said, applies to investor-owned utilities, but not to the Long Island Power Authority, which is state-owned. Nevertheless, he said, LIPA officials have told him they would be amenable to such a program.

Mayor Paul F. Rickenbach Jr. recommended that Mr. Raacke get that assurance from LIPA in writing. “I think you need a paper trail there,” he said.

The East Hampton Town board voted on June 20 to hold public hearings to consider a resolution that would enable a C.C.A. program. Southampton Town, said Mr. Raacke, has already adopted enabling legislation, issued a request for proposals from energy suppliers, and chosen a contractor to serve as administrator of the program.

Village board members liked the idea of the C.C.A., but wanted East Hampton Town to take the lead. “I think we should watch what the town does and then jump in with them,” said Barbara Borsack.

Chris Dimon and Patrick O’Don­oghue, the owners of Pedal Share, a bicycle-sharing company that operates in Southampton Village, Westhampton Beach, and Quogue, sought the board’s permission to expand to East Hampton Village next spring.

The company is proposing to install bike racks at Main Beach, Egypt Beach, in the long-term parking lot, at Village Hall or another spot on Main Street, and near the train station. “We’ll start out with 20 bikes,” said Mr. Dimon, who said he would consult with the village’s Department of Public Works to coordinate the exact placement of the racks.

Renting the bikes is done by app. “You download the app, sign up, find a bike station, and then rent it from there,” said Mr. Dimon. Customers must be at least 18 years old. The cost would be $4 per hour, or $35 per day, and a $59 annual membership would allow for an unlimited number of one-hour rides. The app, as well as signage, said Mr. Dimon, would inform riders about village laws, such as the prohibition against riding a bike on the Newtown Lane or Main Street sidewalks.

Richard Lawler, a trustee, asked what happens to the bikes if the racks are full. Mr. Dimon said the company monitors usage and redistributes the bikes either daily or every other day to avoid such a scenario, but that if it happens, a bike can be securely placed next to the rack.

Mayor Rickenbach was worried about bike accidents. “I would like to have a helmet on the head of anyone who rents that bike for their own safety and for the benefit of the public — it’s a liability,” he said. Board members agreed that a law mandating helmet use would be beneficial, and discussed enacting similar legislation that would apply to every bike rider in the village.

With the village’s plan to redesign and improve Herrick Park underway, Billy Hajek, the village planner and a member of East Hampton Town’s water quality advisory committee, proposed updating the septic system at the park’s bathrooms during that process. “The bathroom facility is owned and maintained by the village, it is open daily 365 days a year, and it gets a lot of usage,” said Mr. Hajek.

The existing system was installed in 1995, he said, and should be replaced with a nitrogen-reducing one. He suggested the village request money from the Community Preservation Fund, which can be used for water quality improvements, to pay for the replacement. The board agreed that it would, at a future meeting, adopt a resolution to seek C.P.F. money from East Hampton Town.

Two representatives from Chase Bank asked the board for permission to redesign the layout of the parking lot at its Main Street branch, because the existing one has resulted in numerous accidents.

Becky Molinaro Hansen, village administrator, said the village, which owns the lot, has an agreement with the bank that allows the public to use it. The village also permits 15 Chase employees to park there.

The most problematic area of the lot, said Stephen Ferrante, a facility manager for the bank, is the center section on the western side of the property, which is designed to fit three cars on each side.

Jennifer Marinacci, the branch manager, said the parking situation is so “atrocious” that five employees had had their cars damaged in the lot by hit-and-run drivers. The bank has proposed a layout that would eliminate that center section, and reduce the overall number of spaces from 31 to 27.

After recommending that Chase employees use the long-term parking lot instead, Mayor Rickenbach agreed to have Drew Bennett, the village engineer, devise a layout for the  lot that would benefit the bank and the village.

In other business, the board approved a special event permit for the East Hampton Chamber of Commerce’s fall festival, which will be held in Herrick Park on Oct. 19.