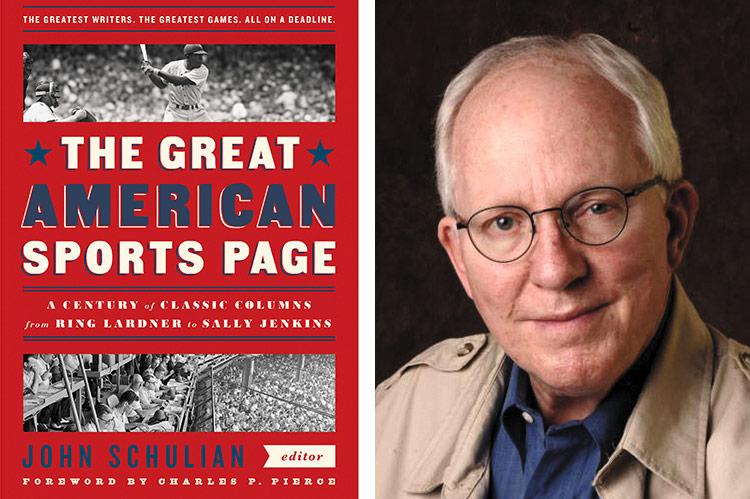 “The Great American Sports Page” is an anthology of columns dating to the first half of the 1920s, but given the anniversary we marked yesterday, let’s keep it current.

Right on page 329 you find Mike Lupica sitting in the Brooklyn living room of one Chris Suhr, watching the first football game the Giants played at home after 9/11, the two talking about Suhr’s brother, Danny, one of the first firemen killed that day — in a famously horrific incident in which a jumper landed on him as he rushed into tower two, and then the fire department chaplain giving him last rites was killed the same way.

It’s only tangentially about sports — Danny, “a square box of a guy,” was the captain of the semipro Brooklyn Mariners football team — more a quiet portrait of tragedy’s aftermath. Uncharacteristically quiet, given the source. But here the brash, know-it-all Lupica of TV steps aside for the sake of the particulars of a good life lost, like how Danny and his eighth-grade sweetheart, Nancy, had opened N&D Pizza on Avenue U and 29th Street.

And then the writer gently takes his leave, shutting the door on a room where the only sound is from the play-by-play.

Lupica lives in East Hampton as of fairly recently, as befits a media star and prolific author of best-selling young-adult novels, though that doesn’t quite match the mansion his predecessor Grantland Rice procured for himself in the village’s estate district. Rice, a giant among sportswriters of the Roaring Twenties, both syndicated and with The New York Herald Tribune, delivered us the legendary line about the “Four Horsemen” of a football apocalypse. You know, the Notre Dame backfield “outlined against a blue-gray sky”?

Rice also happens to be the author of a 1924 entry titled simply “Senators Win Title, 4-3.” He’s introduced by the anthology’s editor, John Schulian, as at his best “when he took some of the purple out of his prose,” but then, comically, his blow-by-blow of that year’s World Series, nearly unreadable in its detail at this great remove, begins with “Destiny, waiting for the final curtain, stepped from the wings today and handed the king his crown. In the most dramatic moment of baseball’s sixty years of history the wall-eyed goddess known as Fate. . . .”

Those were different times.

Schulian, a past sports columnist himself who later moved on to Hollywood, co-creating “Xena: Warrior Princess,” of all things, calls the American sports page a “twentieth-century ritual now turned sepia,” but more than a cri de coeur for the destruction of newspapers and the rise of digital “content,” the book valuably catalogs a number of colorful characters formerly on the scene, the likes of whom we won’t be seeing again, post-corporatization, post-million-dollar paychecks, both of which tend to shut people up.

As an exemplar the editor singles out Earl Weaver, the foul-mouthed, chain-smoking manager of the Baltimore Orioles, who once helped him with his luggage through the vastness of O’Hare International.

Robert Lipsyte, now of Shelter Island, also had an eye and an ear for outsiders, or, say, those with a measure of authenticity, often rendering them in a voice fresh from chewing sawdust. Here, writing in The New York Times in 1969, he makes a trip to the P.O. with Dick Tiger, then 40, a Nigerian-born immigrant to England, a former middleweight and light-heavyweight champion, “unfailingly courteous and cooperative, but dowdy and reserved.”

He was wrapping up his Order of the British Empire medal for shipment to the British ambassador in Washington to protest the country’s pouring munitions into Nigeria “and its continued moral support of this genocide against the people of Biafra,” as he put it in his accompanying letter.

“Well,” Lipsyte quotes the boxer saying as he finishes the package with fingers thick but nimble from bandaging his own hands, “now I know there is something else I can do.”

Taking up barely two and a half pages in the anthology, it reads like a short story. A good, understated one.