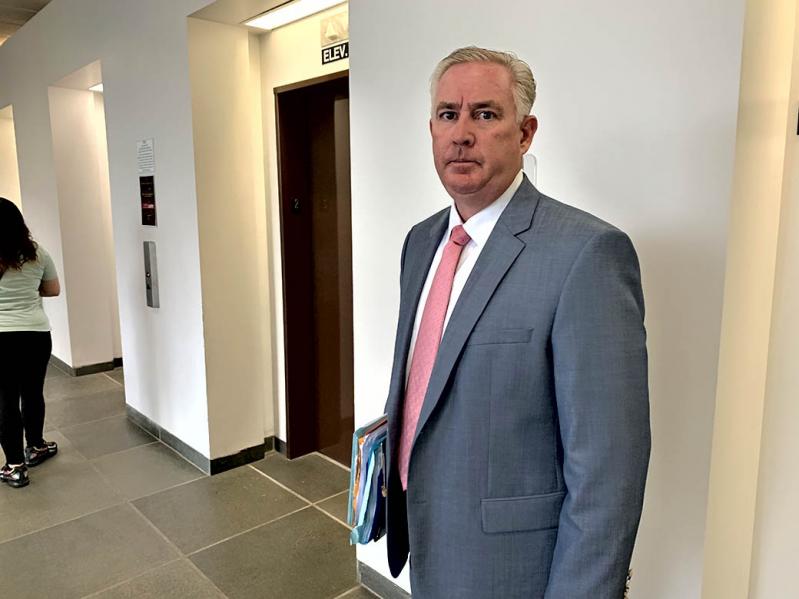 John Halverson said he is in the process of hiring a forensic psychiatrist to evaluate his client, Tenia Campbell, who is accused of killing her twin 2-year-old daughters.
Taylor K. Vecsey
By Taylor K. Vecsey

The attorney for a Medford mother accused of killing her twin toddlers in June has formally submitted notice that he is working on a psychiatric defense.

Tenia Campbell’s court appointed attorney, John Halverson, had indicated at his client’s arraignment last month that he would mount such a claim. During a conference in his Riverhead courtroom yesterday, Judge Richard Ambro said he received a letter regarding the psychiatric defense statute by fax last Thursday.

Outside the Suffolk County Criminal courtroom yesterday, Mr. Halverson said he is in the process of hiring a forensic psychiatrist to evaluate Ms. Campbell, who has struggled with bipolar disorder, depression, and anxiety since she was a teenager, her mother previously told police.

The 24-year-old was arrested on murder charges on June 27 when East Hampton Town police found her near her minivan at the entrance to Third House at Montauk County Park after a search that spanned Medford to the Point. She had admitted to police and in a recorded conversation with her mother that she killed her 2-year-old daughters, the D.A.’s office said. Jasmine and Jaida Campbell, strapped into their car seats, were dead.

The Suffolk County District Attorney’s office said Ms. Campbell suffocated her daughters, though they did not reveal how or exactly where the murders took place. A grand jury indicted her last month on two counts of first-degree murder, which involves the killing of one or more individuals in the same criminal transaction, and the originally charged counts of second-degree murder, which indicates she intentionally meant to kill the girls. Her attorney entered a not guilty plea on her behalf.

Asked what kind of psychiatric defense he was considering — possibilities include not being responsible by mental defect — Mr. Halverson said, “We’re not there yet.”

Mr. Halverson said his client is doing as well as can be expected. She also has a 4-year-old son from a previous relationship. He was with his father the day of the murder. “It’s a tragic situation. She’s obviously a tragic figure at this point. Once again, my thoughts and prayers are with her children and we’ll do what we can on my end.”

Her family was not in court yesterday.

An aunt and other family members had attended her arraignment after the indictment. “I’m speaking with the family. They are supportive, obviously, but also very angry, upset, and devastated. This is something they have lived with for many years with Tenia and that’s also a tragic situation,” Mr. Halverson said.