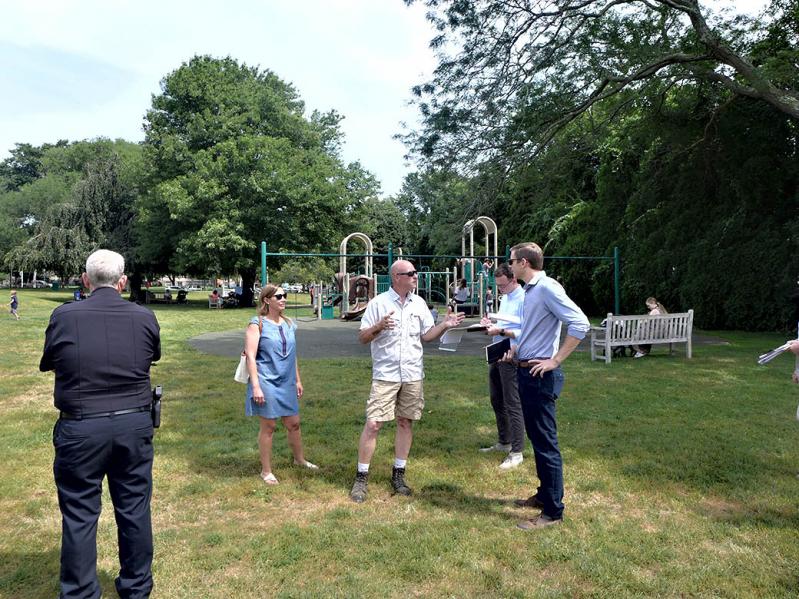 A landscape architecture firm that will develop plans to improve East Hampton Village’s Herrick Park with new pathways, reconfigured ball fields, better lighting, and more formalized entrances was hired by the village board at a meeting on July 31.

The board accepted a $37,500 proposal from LaGuardia Design Group of Water Mill, which promised to have a conceptual design for the project ready in three months. More detailed plans with cost estimates will be prepared two months after that, according to the proposal.

“Everybody has said to me, you are so right, Herrick Park is in dire need of a renovation,” said Rose Brown, a village trustee, who along with her colleague Arthur Graham has been leading a committee focused on improving the park since last fall. The committee is made up of village department heads, including Chief of Police Michael Tracey, as well as representatives of the Ladies Village Improvement Society, the Garden Club of East Hampton, and the East Hampton School District, which uses the park for its middle school sports.

On Monday, Ms. Brown, Chief Tracey, David Collins, the superintendent of public works, Rebecca Molinaro Hansen, the village administrator, and other officials toured the park with Ian Hanbach, a partner in the design firm.

Ms. Brown highlighted some of the issues residents have with the park: the lack of shade for the children’s playground area, the poorly lit walkway to the long-term parking lot, and the ill-conceived entrances from the Reutershan parking lot and Newtown Lane.

“That’s going to be our challenge here. to have a beautiful entrance to the park,” said Mr. Hanbach, as he surveyed the existing split-rail fence along Newtown Lane.

At the end of the park near the Reutershan lot, there appeared to be consensus that the tennis courts in the southwest corner should be relocated to the southeast corner (the current site of a softball field) to provide a more inviting entryway.

“I think it’s really important to have an open viewshed,” said Ms. Brown, who added that placing the courts adjacent to the back of Stop and Shop would provide more screening from the grocery store.

That change would also allow for more direct access from Reutershan to the path that leads to the long-term parking lot.

During the tour, Chief Tracey emphasized to Mr. Hanbach the need to design a park that prioritizes safety. “We’ve always had a problem with people feeling safe and secure,” he said. The lights in the park, he said, should not be blocked by foliage. “Vision trumps tree branches,” he said.

Mr. Collins talked with Mr. Hanbach about creating a green space that was low maintenance, and did not require the use of herbicides or pesticides.

As part of the redevelopment, the design firm has been tasked with integrating the eight-acre park with three contiguous parcels to the north — 25 Muchmore Lane, and 14 and 16 Pleasant Lane — that were purchased for the village by East Hampton Town with money from the community preservation fund. Those parcels would add nearly three acres to the park.

There was talk of turning the Pleasant Lane parcels into an arboretum, and Mr. Hanbach proposed adding a pathway around the perimeter of the park. “It’s a nice way to draw everyone into the park, not everyone is going to go to the baseball field,” he said.

Ms. Brown said the ideas discussed during the tour were preliminary and would be further examined by the committee. Once a final plan has been developed, she said, the improvements would take place in phases.

“I think the park deserves to be the jewel of the village, and I’m hoping with the creative minds of the LaGuardia group we’ll get a transformational design for a beautiful gathering and recreational space for people of all ages,” she said.