In a wide field of candidates, Buttigieg leads the Democratic pack in donors 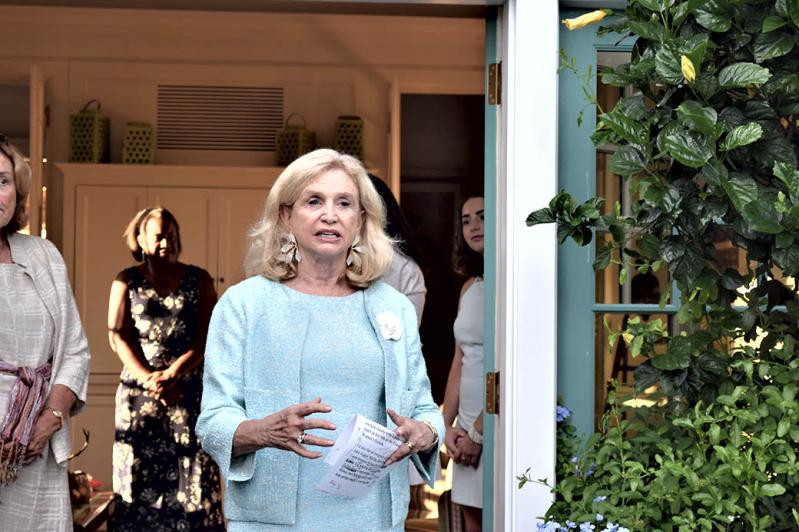 Representative Carolyn Maloney, a New York City Democrat, spoke at a gathering in East Hampton on Saturday about the urgency of impeaching the president.
Christopher Walsh
By Cecelia H. Scheuer

Campaign reporting data compiled from the Federal Election Commission’s website had some surprising statistics this week. Since December, Pete Buttigieg, the mayor of South Bend, Ind., has received more individual donations from Southampton to Shelter Island than any other presidential candidate, Democrat or Republican — ahead of President Trump by a double-digit margin.

Mr. Trump, who is due in Bridgehampton on Friday for a re-election fund-raiser hosted by the Hamptons developer Joe Farrell, trails “Mayor Pete” on the East End by 15 donors. Twenty-three East Enders have given him money since the counting started, as against 38 for Mr. Buttigieg (say “boot-eh-jedge”).     The majority of the mayor’s donors, 13, came from East Hampton Town. The president, to date, has received only 6 here. The bulk of Mr. Trump’s donations have come from Bridgehampton, where eight people have contributed to his re-election campaign. Nine residents of Bridgehampton sent money to Mr. Buttigieg.

Results were drawn by analyzing unique donations to candidates — that is, contributions made by different donors — by ZIP code, information which all registered presidential campaign committees must report to the F.E.C. on a quarterly basis until the end of the 2019 filing deadline on December 31. Individual campaign donations in each ZIP code were then divided among candidates and added to determine the number of each candidate’s donors by area. The area covered by our results includes the ZIP codes of Southampton, Water Mill, Bridgehampton, Sag Harbor, East Hampton and Springs, Amagansett, Montauk, and Shelter Island.

Perhaps equally surprising is that the two front-runners were followed not by former Vice President Joe Biden, as might have been expected, but by Senator Kamala Harris of California, with 18 donors east of the Shinnecock Canal. Mr. Biden, with 14, came in fourth.

Senator Cory Booker, New Jersey’s first African-American senator, followed, with a total of 10 individual donors. It should be noted that some donors appear to be giving to their favored candidate more than once.     Other prominent Democrats — Senators Bernie Sanders, Elizabeth Warren, and Kirsten Gillibrand, and former Congressman Beto O’Rourke — lagged in donors by comparison. Ms. Warren received only one contribution on the East End, which came from an East Hampton resident, and Mr. O’Rourke had two. Senator Sanders received seven in total, as did Senator Gillibrand, who is said to be gaining recognition on the state and national level.

“I think she’s been a terrific senator for New York State, very effective, and I wanted to support a New York woman who is not afraid to take risks,” said Judith Hope, an East Hampton resident, former town supervisor, and former chairwoman of the New York State Democratic Committee. “Her race was in a district where Democrats were heavily outnumbered — and this is probably turning out not to be her year or her time — but she’s a young woman who I think has a wonderful future in politics.”

While the significance of local donors giving small amounts is often overlooked in the context of the general election, presidential campaigns spend vast sums of money targeting individual donors to ensure their candidate’s presence on the next debate stage. According to The New York Times podcast “The Daily,” campaigns will spend up to $70 in online advertising to secure one new single-dollar donation. In a broader context, this means that candidates who, said The Daily,  are “on the fringe of qualifying will have to spend more time with big donors in order to raise the money to attract the smaller, one-dollar donors.”

What’s more, candidates must have had a minimum of 200 unique donors per state in at least 20 states, and a general total of 65,000 donors, to qualify for June and July’s debates. That number is said to double for September’s debates, which will require candidates to have 130,000 donors in order to qualify, and will “incentivize them to run grassroots campaigns.”

The last candidate who qualified for the third Democratic debate next month is Senator Amy Klobuchar of Minnesota, who received the support of seven donors on the East End. Andrew Yang, and Julian Castro received between them only four contributions, from four people, and did not qualify. President Trump’s Republican challenger, William Weld, who announced his candidacy in April, received a total of four donations from four donors.

The next F.E.C. filing deadline for campaign contributions is Oct. 15.