But bullying, vaping, even assault do happen 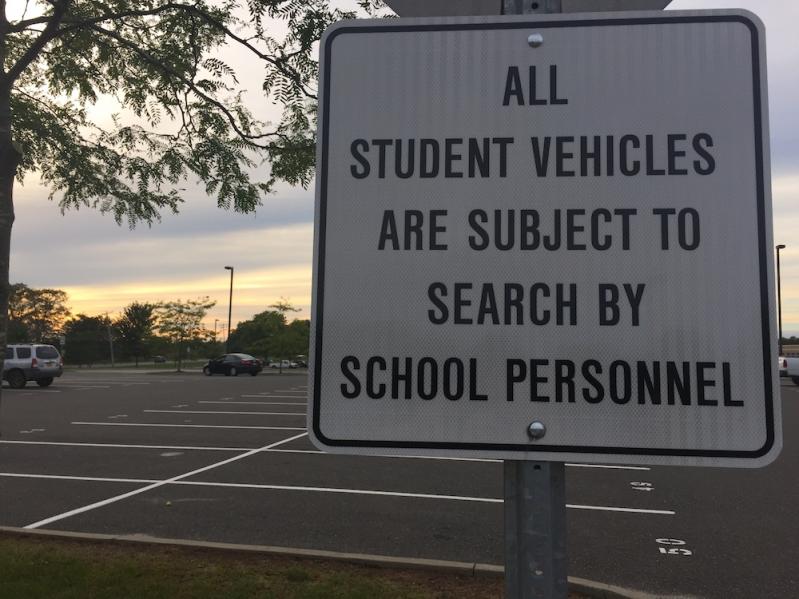 Signs like this one at East Hampton High School warn students of reasonable searches by administrators, which is how some instances of drug and alcohol use were found in the 2017-18 school year.
Christine Sampson
By Christine Sampson

A report released earlier this month by the New York State comptroller says schools in the state collectively reported more than 32,000 violent or disruptive incidents in the 2017-18 school year, but specific data show very few of those incidents taking place locally.

At East Hampton High School, for instance, the majority of student infractions reported to the state involve vaping. In 2017-18, out of 17 total incidents that were required to be reported to the state, eight were for “use, possession, or sale of drugs.” That rose to 25 in the 2018-19 school year, and Adam Fine, the school principal, said that offense is the category into which vaping falls.

“The difference between East Hampton and other schools is I don’t have violence here,” Mr. Fine said. The school is “well below the average of that. I don’t have fights or massive weapons issues or gang activity. We’ve not seen that here, so that is a good thing.”

“The one thing that we haven’t done but are looking at doing, and have probably taken too long to do, is . . . put an educational piece into the suspension [for vaping],” Mr. Fine said. “We have to. We’re going to try to do a little more around education and helping kids quit. There’s tons [of information] coming out about lung damage.”

At Pierson Middle and High School, one sex offense and one drug-related incident were reported in 2017-18. However, where Pierson hits somewhat of a low among local schools is bullying. Nine instances of cyberbullying were reported, as were seven other incidents of “discrimination, harassment, or bullying” in a category that excludes cyberbullying.

Katy Graves, the Sag Harbor superintendent, said specific incidents could not be discussed so as to protect the students’ confidentiality. She also said the numbers of incidents are low in general.

“We don’t have a disruptive school environment. We have a lot of structures in place,” Ms. Graves said.

The Springs School, which houses kindergarten through eighth grade, had the highest numbers of reportable incidents of any school between Montauk and Bridgehampton. There were two forcible sex offenses and two other sex offenses at Springs; five incidents of assault with physical injury; 12 cases of cyberbullying, and one case of “use, possession, or sale of drugs.”

“The reporting requirements have increased tremendously,” Eric Casale, the Springs School principal, said. “We make sure all incidents are reported.”

He said the school has been ramping up support programs such as mentoring, as well as a character education course called Second Steps.

“It’s one of the most highly recognized programs in the state and the country,” Mr. Casale said. Students “work with mental health staff and health teachers in social and emotional learning, identifying certain feelings they have. From that, we’ve seen the kids come in and be more willing to share what’s going on in their lives, both positive and negative.”

The Amagansett, Wainscott, Saga­ponack, and Montauk Schools did not have anything to report to New York State in 2017-18. Bridgehampton School administrators reported just one incident of “discrimination, harassment, or bullying” and nothing else during that year.

Robert Hauser, Bridgehampton’s superintendent, cited the school’s “unique, small setting” as a reason why reportable incidents are few and far between. He said kids are often the ones telling the adults about problems.

“The ratio of our instructional staff — just students to teachers — is about five- to-one,” he said. “We have a lot of eyes and a lot of ears always looking out for the students. If you add in the non-instructional staff it’s probably four-to-one. We do have a lot of supervision and a lot of oversight, and in my opinion, we also have a great support staff from school counselors and the psychologist, who are available to the kids.”

In schools that showed “zero incidents” across the board, Mr. Casale said, “it may be that the kids aren’t reporting it or that the data isn’t complete.”

“It’s a teaching moment for us,” he said. “Kids are aware of what’s going on and we’ve seen an uptick in kids being more comfortable sharing what’s going on.”