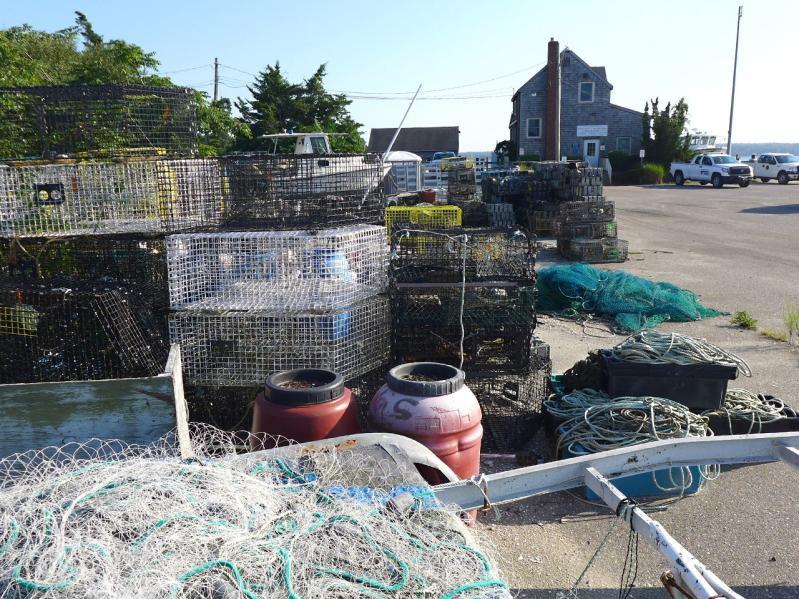 A portion of a town-owned parking lot at Gann Road on Three Mile Harbor, near where officials have plans for a shellfish hatchery and community-use building.
David E. Rattray
By Christopher Walsh

Anger over the East Hampton Town Board’s plan to relocate the town’s shellfish hatchery to a residential area in Springs spilled over to the town trustees’ meeting on Monday.

Last year, the town purchased 36 Gann Road with $2.1 million from the community preservation fund. Earlier this year, board members unveiled preliminary plans to move the hatchery, housed at present in a World War II-era warehouse on Fort Pond Bay in Montauk, to an approximately 5,500-square-foot building to be constructed on the site. An existing building would be converted to an environmental education center.

The hatchery’s present site is problematic for several reasons, its director has said, not least being the distance from shellfish nursery sites, including one in Three Mile Harbor adjacent to the Gann Road parcel, and the high mortality that results from transporting juvenile shellfish from the hatchery in Montauk.

The town was awarded a $400,000 Empire State Development grant, which the board agreed would be allocated toward design, permitting, and preliminary construction costs for the new facility, which has an estimated total cost of $2.65 million. Critics of the plan, including property owners on Gann Road and Babe’s Lane, a candidate for town supervisor, and a sitting councilman, criticize what they have called a headlong rush to execute the plan without full environmental review, and a project driven not by need so much as the receipt of grant funding. The town submitted an application for a $2 million grant for construction last month.

On Monday, prior to a presentation from Barley Dunne, the hatchery’s director, in favor of moving it, the trustees heard from Mark Mendelman, an owner of several marinas and a vessel and repair business on Three Mile Harbor, as well as the Gann Road building housing Bostwick’s on the Harbor restaurant. Mr. Mendelman, who lives on Gann Road, asked the trustees’ position on the town’s hatchery plans, and told them he is opposed to “a 5,500-square-foot industrial facility” in the neighborhood. Ninety percent of the neighborhood’s residents are against it, he said.

Francis Bock, the trustees’ clerk, said he was puzzled by Mr. Mendelman’s opposition. “You have a commercial dock, your boatyard, your restaurant, your storage area,” he said. “To say this is going to change the neighborhood . . . is a stretch.”

Mr. Mendelman answered that he was speaking as a resident. “I’m speaking as a guy who’s lived in East Hampton my entire life,” Mr. Bock rejoined. “I wouldn’t want to live next to your boatyard. I have a solar farm next to my house — it’s the world we live in. I think it’s a great project, personally,” he said of the proposed hatchery site, citing plans for a low-nitrogen septic system, and rain garden, bioswales, permeable reactive barrier, and permeable pavement to capture and filter runoff before it enters Three Mile Harbor.

Mr. Mendelman said that tidal flushing and storm drains on Gann Road mitigate the compromised water quality posed by runoff. “It’s a residential zone,” he said. “The town has put forth an industrial facility that’s way oversized” and, he said, would not result in improved water quality.

He noted that the town board had committed to the funding of the project at its July 18 meeting. “They’re already down the road,” he said. “And they expect me not to be upset?” He pointed to the July 18 resolution’s recognition and acceptance of a preliminary environmental assessment that concluded there were no significant adverse impacts and asked, sounding incredulous, “How could there be zero environmental impact?” Noise and increased traffic will be among the impacts to the site, he said.

“I have a hard time taking you seriously,” Mr. Bock answered, “because of what you have down there — a marina and a restaurant.”

John Aldred and Susan McGraw-Keber, trustees, sided with Mr. Bock. Mr. Aldred, who ran the shellfish hatchery for 20 years, said no one is complaining about noise from the eight water pumps at the existing hatchery. “You’re making it sound as though there’s a General Motors plant,” he said. “It’s no more noise than a house with a swimming pool.”

Mr. Mendelman insisted that the project represented “wasteful spending” that “is not going to improve water quality at all.” He is not alone in that opinion. Councilman Jeff Bragman has objected strenuously to what he calls a rush to implement a project based more on the availability of funding than a genuine need. “The issue is, is it appropriate in the location where it’s proposed?” he said on Tuesday. “What’s driving this is [the board’s] desire to get ‘free money,’ and what should be driving it is environmental review.”

In a letter in this week’s issue of The Star, David Gruber, a candidate for supervisor on the Independence and Libertarian Party ballot lines, accuses the town board of acting illegally in its zeal to complete the project for political reasons. Mr. Gruber regularly accuses the board of acting unlawfully, most recently at its Aug. 20 meeting.

Mr. Aldred told Mr. Mendelman that New York State has appropriated the grant money, and “it’s going somewhere. If not this project, something in Brookhaven or Riverhead. It’s not going to be returned to the taxpayer, which is an argument you’re making.”