‘Old has a place with new: They combine well.’ 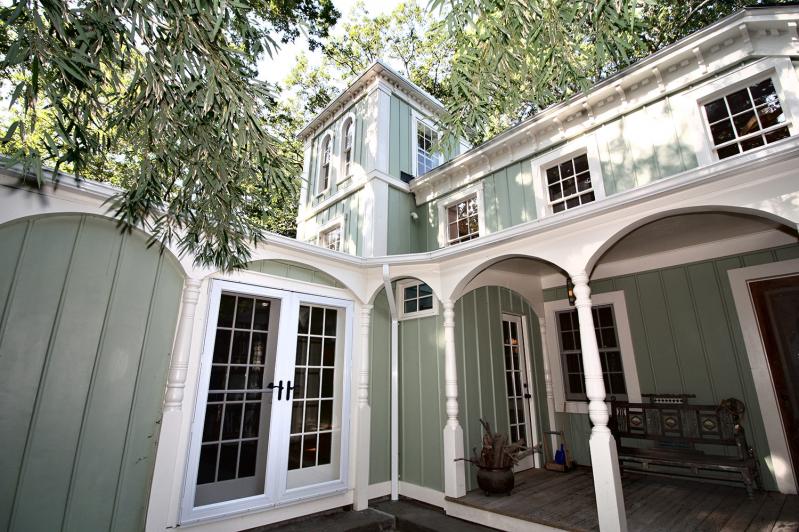 The side entrance shows the structure’s irregular Italianate style.
By Christine Sampson

Adrian Devenyi and Ramona Albert embarked on a top-down interior renovation of their storied Sag Harbor house in 2018, and in their case, “top-down” included a tower about 40 feet tall, visible above high hedges and between tall, stately oaks on Jermain Avenue.

Mr. Devenyi and Ms. Albert are the owners of the Ephraim Byram house, built in 1852 and occupied for many years by the astronomer, clockmaker, engineer, and mathematician. Byram, inventor of the orrery, a model of the solar system, also made clocks for public buildings, including the Sag Harbor Methodist Church and New York’s City Hall.

Once Byram’s observatory, the interior of the tower today is an office where Mr. Devenyi, a Yale-educated physicist, scholar, and finance expert, will often work, read, and reflect. Up a flight of stairs originally built for a ship, the workspace has an antique desk, a fresh coat of pale gray-green paint, and new lighting. It’s only one part of the renovation, which Mr. Devenyi and Ms. Albert, who is an architect and designer, say was inspired by Byram himself. They respectfully asked The Star to refrain from publishing personal photographs.

“We very much want to respect the spirit” of the house, Mr. Devenyi said. “The idea would be that if Byram himself visited us, he would be happy in the house. . . . We tried to curate his intellectual outlook, his curiosity, his love of books.”

The rooms, Mr. Devenyi explained, are similar to or the same as those Byram would have had. In that spirit, the couple brought in a mix of furnishings and artifacts from around the world and across the eras: a handmade, iron Moorish bed frame, hundreds of years old, in the master bedroom; a delicate Japanese wall scroll from 1675, depicting a shy poet behind tall grasses reading to a beautiful lady; a 1911 gramophone that not only works, but sounded great with the “Blue Danube” playing during a recent visit.

Perhaps what now distinguishes the interior from previous iterations (documented, in 2012, in an edition of an East Hampton Star Home Book supplement) is the juxtaposition of old and new. The house has been modernized, with new kitchen appliances, lighting fixtures, and air-conditioning, but retains old hardwood floors, brick fireplaces, and windows with ripply glass.

“We’re very eclectic and we’re not apologizing for it,” Mr. Devenyi said, toying with prisms dangling from modern sconces that cast rainbows on the wall. “We believe old has a place with new. They combine well.”

The couple wish they owned a Byram clock. Instead, a Swiss antique in the living room offers a sense of what such a clock might have added to the space. They also don’t have a single television in the house, believing it wouldn’t be fitting. But they do have an old rotary telephone, which was in Mr. Devenyi’s house when he was growing up in Romania, and they have volumes upon volumes of books on library-style shelves, many very old.

A book of short stories by Val Schaffner, a former East Hampton Star reporter and columnist, is on the coffee table. “The Astronomer’s House,” which references Byram, and contains fictionalized takes on real events, adding to the house’s mystique.

“It’s sheer happiness to be here,” Mr. Devenyi said. “It’s on a much more human scale. It feels like a home, not a showpiece to impress your friends. There are moments, different parts of the day, that make each room special.”

Morning sun illuminates the kitchen and twilight fills the living room. Mists often rise from the swimming pool and man-made pond in the backyard.

The couple also own an 1800s house in Brooklyn, which is next on their list of projects to tackle. Ms. Albert designed the Byram house renovation and interiors herself, even some of the pieces in the house, such as a trio of brass candlesticks that stand on their own but have bases interwoven for whimsical effect.

They didn’t change the irregular, Italianate exterior of the house, which has been landmarked by the Village of Sag Harbor. They simply bolstered the original beams to make it structurally sound.

“This was one of the hardest things to do because it’s a very old house. It’s a lot harder to do than something new,” Ms. Albert said.

“The house itself has a place in the village’s imagination,” Mr. Devenyi said. “It belongs to the village, really.”