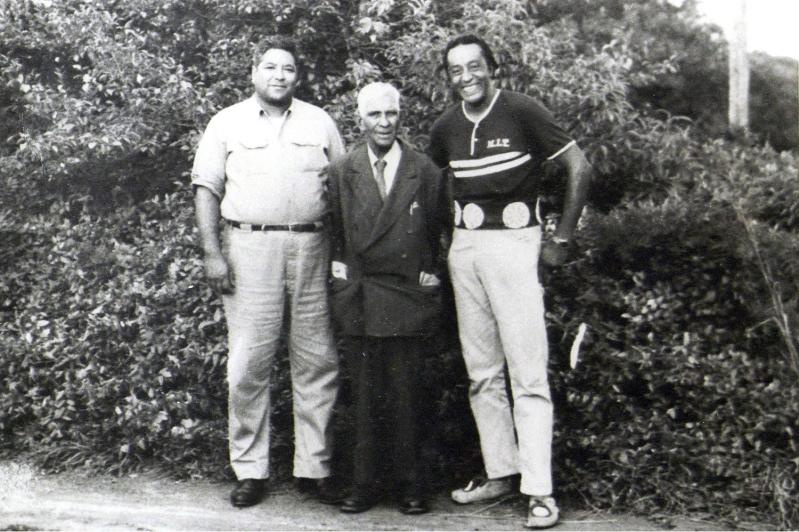 Red Thunder Cloud, a.k.a. Carlos Westez (1919-1996), is captured here after an impromptu dinner with his friends from the Shinnecock Nation following the Shinnecock Powwow in 1967.

The powwow celebrates its 73rd year this year, on Labor Day weekend. This photograph shows Red Thunder Cloud to the right of an older man he identified as Sitting Bull (a.k.a. Albert Ashman), called Bull by friends. To the left of Sitting Bull stands a man Red Thunder Cloud knew as War Elk, a.k.a. Harry Williams.

Red Thunder Cloud noted in a caption the white napkins visible in Sitting Bull’s pockets and described how he had wrapped up the food he wasn’t able to finish at their dinner out — bread and leftover pork chops.

Red Thunder Cloud recalled that he was moved to ask his friends to dinner from a fear that Sitting Bull was getting older and might not be around much longer, and this ended up being the last time Red Thunder Cloud saw him.

Because of that fear, he insisted on taking pictures or arranging for them when Sitting Bull was back on the Shinnecock Reservation at the home of Stella Arch (1871-1969).

In a previous Item of the Week feature, it was noted that Red Thunder Cloud was a controversial figure, and some of the captions he wrote express political views and word choices that probably would not be used today. His photographs, however, offer us a wonderful opportunity to see historical images of Montauketts, Shinnecocks, and some of the past powwows.

Andrea Meyer is a librarian and archivist for the East Hampton Library’s Long Island Collection.