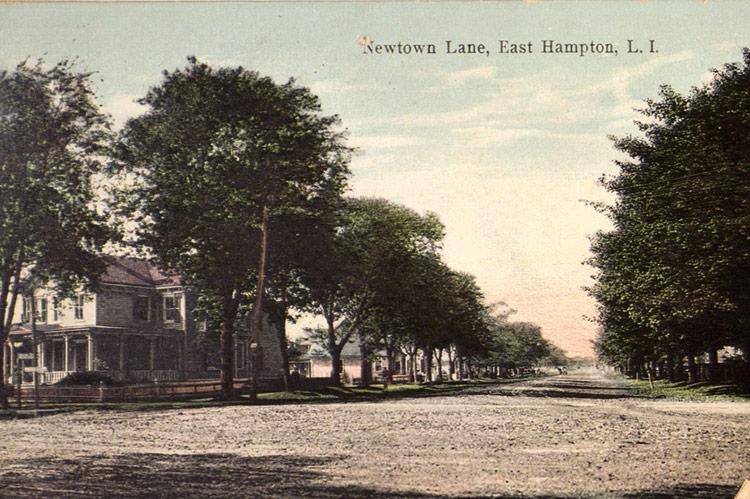 The focus of this week’s Item of the Week is not so much Newtown Lane, featured in the postcard seen here from the East Hampton Library’s Harvey Ginsberg Postcard Collection, but the house seen at the left, belonging to Christian Schenck (1851-1924), on the corner of Main Street and Newtown Lane — where Elie Tahari now stands, at 1 Main Street.

Christian Schenck was born in Hattenbach, Germany, on Aug. 5, 1851, to Henry and Eva Schenck. He immigrated to the United States as a teenager, borrowing money to secure his passage, and worked for Judge Henry P. Hedges in Bridgehampton. While there, he married Eva Elizabeth Kennell and ran a meat market with his brother before moving to East Hampton in the 1880s.

While in East Hampton, Schenck opened another meat market, around 63 Main Street, where Vineyard Vines is today. In need of a home for his family, Schenck sought property.

According to a Sept. 7, 1883, diary entry by Miss Frances (Aunt Fanny) Huntting, who boarded across the street at that time, Clara A. Fithian Griffing “sold her house last week to Christian Schenck” for $2,900. Mrs. Griffing had inherited it from her father, Abraham Fithian, who died in 1876.

It is said Schenck moved the Fithian house elsewhere to build a newer, more modern one on the property later in 1883. In the spring of 1884, Frances Huntting recorded in her diary that the Schenck house was just about ready for the family to move in. “Very pretty,” she commented, “pearl color with chocolate-colored trimmings.”

In 1902, Schenck sold his meat market business to the Gilmartin brothers, who opened their own meat market soon after. In an interview in 1998, Christian’s grandson Kennell Iddings Schenck conveyed that the Schenck family home had been moved in 1904 to the corner of Church Street and Gingerbread Lane. Its wraparound porch was removed and the house divided into two pieces to make it easier to move. The house is smaller than originally built, but still stands today.