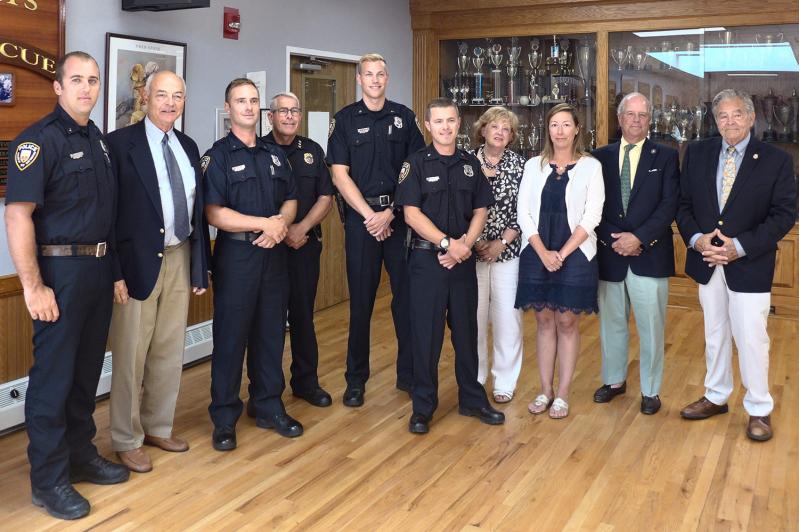 East Hampton Village police officers who recently helped save a man’s life were recognized at a village board meeting on Friday.
Jamie Bufalino
By Jamie Bufalino

At Friday’s East Hampton Village Board meeting, Police Chief Michael Tracey recognized members of his department and of the village volunteer ambulance service who had recently saved two lives.

On April 13, Officers Eben Ball, Brendan Wirth, Steven Niggles, and Christian Denton were called to the Palm restaurant on Main Street, where a man was reported to be unconscious and not breathing, the chief related. The officers found no discernible pulse, and began performing CPR. They were later assisted by Anthony Carlo, a village paramedic.

The man soon began breathing, and regained consciousness shortly after.

“Due to the quick response and quality of care, the man’s life was saved that evening,” said Chief Tracey.

During the village street fair on May 11, Chief Tracey said, a female passenger on a county bus was found unconscious and unresponsive. The bus stopped at the edge of the fair, on Newtown Lane, and a fellow passenger sought help from Officer Sean Christian and Detective Brian Eldridge.

Detective Eldridge found the woman slumped over her seat, not breathing and without a pulse, said Chief Tracey. He placed her on the floor, began performing CPR, and asked Officer Christian to grab his defibrillator. Officer Christian returned with the device and used it on the woman, assisted by Sgt. Richard Mamay and Officer Jennifer Dunn.

After the first shock from the defibrillator, she still had no pulse, said Chief Tracey, so the officers and Randy Hoffman, a critical care technician with the village ambulance service, performed several more cycles of CPR. The woman then began to breathe on her own.

“She is alive, and home in Montauk,” the chief told the board members. “These officers made all the difference, and I couldn’t be prouder.”

In other business, the board discussed a proposal from Robert Rattenni, the owner of a commercial building at 55 Main Street, who is seeking to install a new conventional septic system under the Reutershan parking lot. The village would have to grant Mr. Rattenni an easement for the construction.

Trevor Darrell, a lawyer representing Mr. Rattenni, said a new septic system that could accommodate increased use was necessary for tenants in the building, including the Juice Press shop, which he said has been forced to prepare their juices off-site. The new system, said Mr. Darrell, would comply with Suffolk Health Department standards, and the installation as well as the abandonment of the old septic system would be done at the owner’s expense.

Mr. Rattenni said the owners of the Juice Press, which operates during the summer season, had indicated they would be interested in staying open longer if the new septic system allowed them to prepare juices on site.

“It is becoming more difficult to keep business going,” said Mr. Rattenni. “It would be a boon to the village. That’s one of the reasons I want to make the economic investment to do it.”

A similar easement was granted to the Starbucks store on Main Street in 2015, but Mayor Paul F. Rickenbach Jr. said the board would have to see more details before approving the proposal.

“There was a period of review and negotiation with the Starbucks easement,” said Linda Riley, a village attorney, who urged Mr. Darrell to begin filing the paperwork. “The devil’s in the details,” she said.

Public hearings were held on two proposed laws, one to prohibit U-turns and left-hand turns from Apaquogue Road onto Georgica Road, and the other for a proposed law that would prohibit commercial vehicles from parking at the end of Cove Hollow Road (south of Georgica Road) at Georgica Cove.

No one voiced opposition to the laws, and the board passed them later in the meeting.