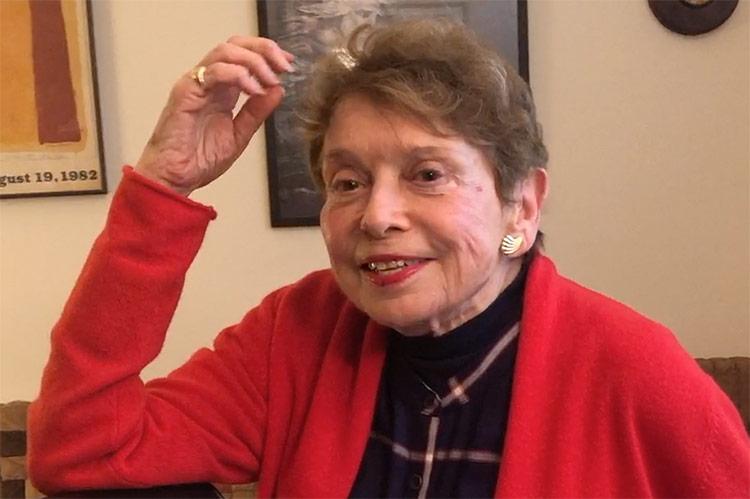 Paula Trachtman, an author, editor, teacher, and activist with a singular talent for bringing people together, died of a heart attack in her sleep on Friday, less than a week shy of her 88th birthday. A year-round homeowner in Amagansett and East Hampton since 2000 and a summer resident long before that, she had moved with her husband, Edward Butscher, to Peconic Landing in Greenport about two years ago.

Although beset over the years by various ailments, Ms. Trachtman soldiered on, to the point where friends could hardly believe she was gone. “I thought she would outlive all of us,” one young woman lamented at her funeral Sunday morning at Cedar Lawn Cemetery in East Hampton. “She was the glue that held us together.”

“Remarked upon by all who fell within her broad circle of friends was Paula’s ready wit and treasure of entertaining stories, her gift for sharing her amusement at the world’s absurdities, including her own,” said Mr. Butscher.

Her only child, Amy Elisabeth Rothholz, a promising poet whose first and only book, “Iced Tigers,” occupied the place of honor on her bookshelf and in her heart, died at 25. In 1995, Ms. Trachtman and Mr. Butscher founded the Amy Award, an annual prize administered by the literary organization Poets and Writers, for female poets under the age of 30, who read aloud from their own poetry and from Amy’s. This year’s event was held in early June at Peconic Landing, with the Academy Award-winning actress Mercedes Ruehl reading Ms. Rothholz’s work.

Ms. Ruehl and Ms. Trachtman were dear friends. “I adored her. She was a force of nature,” Ms. Ruehl said this week. “She had an extraordinary talent for bringing people together. She was infinitely generous, infinitely kind, and erudite. She brought people together by celebrating everyone individually, their successes, their victories, their losses, and their sorrows.”

Galen Williams, the founder of Poets and Writers and owner of an East Hampton landscaping company, agreed. “Paula was the most generous and protective big sister to me for decades,” she said. “We were in a book group for 30 years, she gave me my first landscaping job, she helped me get Poets and Writers going in the early years, she invited me to countless dinner parties — and she never forgot my birthday!”

Actually, she never forgot anyone’s, or their children’s, not even their grandchildren’s. The proud owner of a number of well-loved cats, her favorite birthday gift to the under-7 set was a coloring book of felines with a jumbo box of Crayola crayons.

Ms. Trachtman was born in Queens on Aug. 22, 1931, to Morris and Leah Trachtman. She grew up in Ozone Park and attended John Adams High School, earning bachelor’s and master’s degrees at Queens College. Her first marriage, to Peter Rothholz, ended in divorce. For 30 years Ms. Trachtman taught social studies at a junior high school, where she met Mr. Butscher, a poet and the author of acclaimed biographies of Sylvia Plath and Conrad Aiken. They married in April 1976.

At her junior high school, Ms. Trachtman became a union organizer, a perfect outlet for her abilities. “She inherited a very strong social conscience and sense of community from her Jewish forebears, who immigrated to this country from a small village in Ukraine,” said the poet Fran Castan. “She had an unerring moral center and fought for what she believed was right, and right meant justice for all.”

After retiring to Amagansett, she volunteered for the East Hampton School District as a teacher of English as a second language. She also used her considerable organizing skills to support the women’s movement, and had no hesitation in making her often-controversial views known. She was a fierce writer of letters to this newspaper, sometimes on local topics such as the proposed expansion of Amagansett Square in 1992 — “a horror-in-the-making,” she called it — and, more often, on politics. “I hope every Nader voter will recognize that adhering to rigid idealism now is being a partner to government-sanctioned murder,” she wrote in 2004, during the war in Iraq.

Ms. Trachtman also wrote several novels, one of them a best seller; edited many articles, and compiled thousands of jokes, which, said Ms. Castan, she could tell from memory and with perfect timing. With the advent of email she was an inveterate forwarder of jokes and puns; she could not stop herself.

Sarah Maslin Nir, a New York Times reporter, said that Ms. Trachtman “had no other way to be in life than to be the fulcrum of everyone else’s life. She spent her life giving the love she couldn’t give Amy anymore to all in her sphere.”

“As a young girl,” Ms. Nir said, “I was a beneficiary of that love. She got me my first cat and she started my love affair with animals and books. I have a book coming out, “Horse Crazy,” about my life with horses. She read it and edited it. She was the only one I’ve permitted to read it. Not even my mother has read it.”

Ms. Trachtman was buried beside her daughter. Her headstone reads: “Amy’s Mom,” and beneath, “And time itself a wound that will not heal.”

She had a sister, Muriel Hirt of Newton, Mass., who died before her. Mr. Butscher is her only survivor.