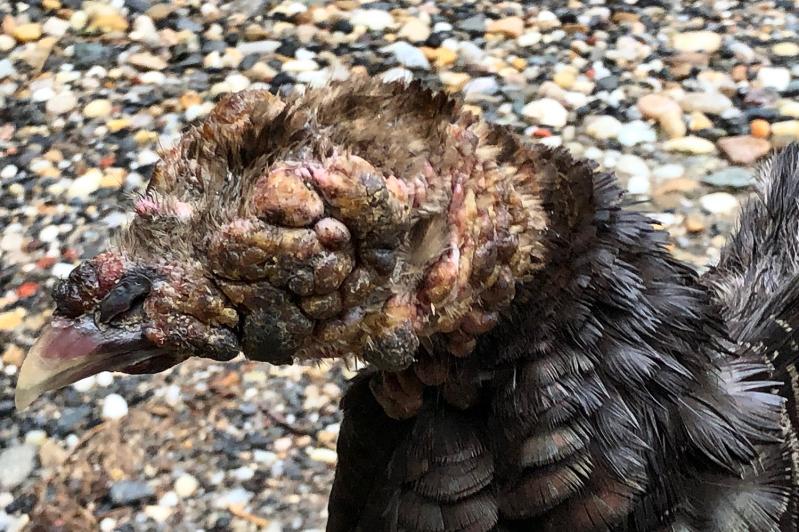 A wild turkey in Montauk afflicted with a viral infection known as fowl pox.
Debbie Kuntz
By Larry Penny

Have you noticed? Something peculiar is going on in Turkeydom. Turkeys here and there on the South Fork have begun to develop bunches of pustules on their faces and elsewhere, but only on bare patches of skin, not on feathered areas. A while back, I examined a road-killed tom on the side of Route 114 between East Hampton and Sag Harbor that was intact but looking grizzled and spotty. I thought it was just a very old turkey. Not too long after I was informed by Debbie Kuntz of Montauk that it could be what she called “fowl pox.” She had just sent a turkey with that disease to a rehabilitation center.

Ah, I thought, that explains Maryann Buquicchio’s reports starting in March of a female, looking a bit haggard, sitting on eggs that never hatched on the side of the road near her house by Three Mile Harbor Road. Her attention was drawn by patches of ugly brown and white fecal material near the eggs that appeared now and again. By the middle of May, Mrs. Turkey had left the eggs and the nest; they never hatched. I now realize it was another case of fowl pox.

Having grown up next to my grandfather’s white leghorn chicken farm in Mattituck, the term fowl pox had cropped up now and then, but I probably confused it with the human disease caused by a virus, chicken pox. Just about every kid in Mattituck had suffered a bout of chicken pox in the 1940s during World War II.

I called 631-728-WILD, the Evelyn Alexander Wildlife Rescue Center in Hampton Bays, and, yes, the woman who answered said the center had a wild turkey or two that had the disease. It turns out that fowl pox is known to attack at least 232 species of birds, each having its own strain or species of the virus. According to Wikipedia, there are at least 10 species in the genus Avipox, as well as several other varieties. The one that attacks turkeys is the turkey pox virus almost identical to the fowl pox virus that attacks chickens, in particular, barnyard chickens. Apparently, it can be carried and disseminated by several different hosts including mosquitoes, fleas, and other insect parasites that feed on birds.

Apparently, 20 percent or more of the chicken population has to have the virus before it becomes rampant and before it is treatable with virucides, but little is known about the extent to which the turkey pox virus impacts wild populations. In a fairly thorough recent study of New York State’s wild turkey population, the New York State Department of Environmental Conservation says that after several years of growth, since peaking in 2001, the state population has waned considerably. One hundred years ago there were no wild turkeys in the state, and after reintroduction in the mid-1900s, the population grew dramatically, particularly so while predators — raccoons, coyotes, opossums, foxes, bobcats, and the like — were thinning. The first-named species underwent a dramatic decrease due to rabies between 1990 and 2000.

But nowhere in the monograph is there mention of turkey pox and its possible impact on the state’s wild turkey population. It appears that Debbie’s and Maryann’s observations may have opened a Pandora’s box. According to one early book about New York birds, wild turkeys in Albany during the early 1700s became so common that the city’s inhabitants at that time begged for relief.

Male turkeys are similar in their courting behavior to prairie chickens and several other game birds, as well as deer and many other mammals. They get together in a group and strut their stuff. The winner takes all! But there is a downside to that contest. The winner is then charged with not only servicing all of the females in the harem but protecting them and their chicks from would-be predators. Val Schaffner, once a columnist and reporter for this paper, who still maintains a residence in Springs for his family, once told me that the male turkeys in his neighborhood were aggressive to the point of chasing him and others during the breeding season.

An avid hunter and fisherman, who used to live here but has since moved upstate, told me that he would routinely be chased by a particular tom in the area of Big Reed Pond in Montauk County Park to the degree that he sought help from a turkey expert who lived in Florida. The man told him to stand his ground the next time he was attacked by the turkey, but also to grab the turkey by the neck and scare the hell out of it. The next time it happened, and the turkey charged from about 50 feet away, he did just what the man said. The turkey shuffled off and never bothered him again.

Every year the D.E.C. sponsors a wild turkey count. The counters are mostly volunteers. The National Wild Turkey Federation is one of the organizations that keeps track of the national population. It’s more than ironic that the wild turkey has made such a marvelous comeback, along with the bald eagle, whooping crane, California condor, osprey, and several other American

species. Beginning with the Migratory Bird Treaty Act in 1918 and culminating in the Nixon administration’s Endangered and Threatened Species Act of 1972, the United States government, along with state, county, and local governments, as well as a great many organizations and individuals around the world have worked so hard to bring these and other species back from the brink of extinction.

Our current president, whose administration has made changes to the way the Endangered Species Act is enforced, may have plans to the contrary.