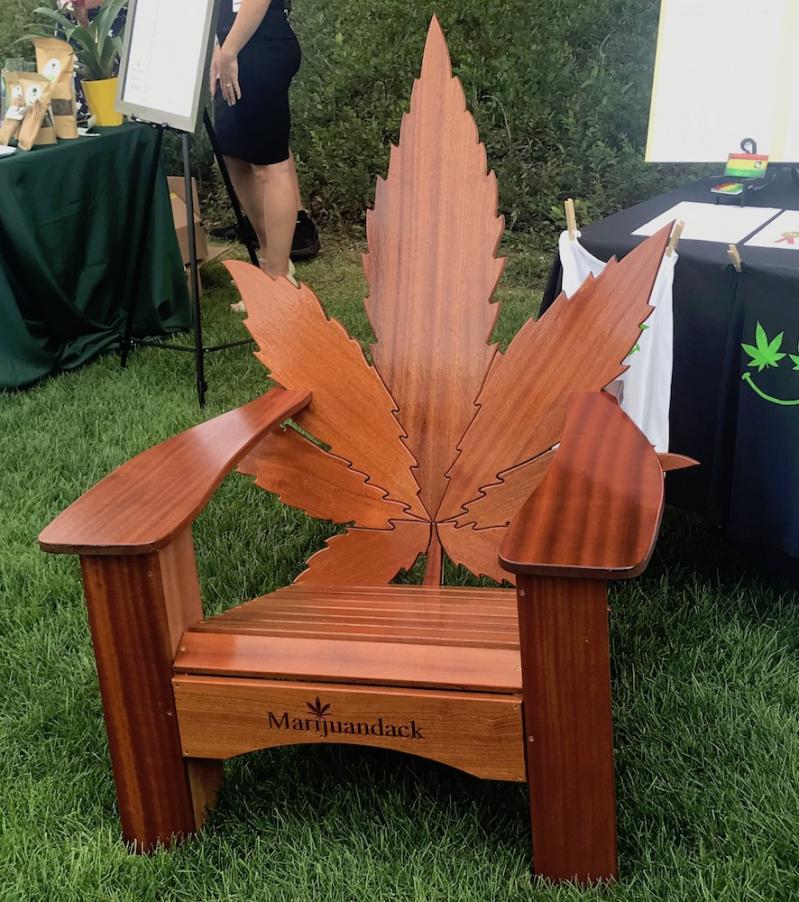 Vendors of cannabis-related products including CBD tea and a Marijuandack chair displayed their goods at the first Hamptons Cannabis Expo on Sunday.
Jamie Bufalino
By Jamie Bufalino

The future of marijuana as a medical treatment, an easily accessed recreational drug, and an investment opportunity was discussed at the first Hamptons Cannabis Expo held at the Clubhouse in Wainscott on Sunday.

The event, organized by Gary Bierfriend, a lawyer and businessman, featured a panel of professionals in the cannabis industry, including Dr. Michelle Shuffett, an executive at Columbia Care medical marijuana dispensary, Matt Karnes, the founder of GreenWave Advisors, which offers financial analysis of cannabis businesses, and State Senator Diane J. Savino, who advocated the 2014 Compassionate Care Act, which legalized the use of medical marijuana in the state.

A bill that would have legalized the recreational use among adults in New York did not pass in the most recent legislative session. It would likely not pass next year either as “2020 is an election year,” Ms. Savino said on Sunday, noting that legislators would be more reluctant to vote for a controversial measure while campaigning for re-election.

While the bill has broad support in New York City and the western part of the state, said Ms. Savino, residents of suburban areas, including much of Nassau and Suffolk Counties, are predominantly against it.

The safety of marijuana use was debated by Dean Petkanas, the founder of Kannalife, a biopharmaceutical company, and Joe Dolce, the author of “Brave New Weed: Adventures in the Uncharted World of Cannabis.” Mr. Petkanas said it was a misconception that it was safe to drive after having used marijuana, and also cited recent news reports of a teenager who had experienced marijuana-induced psychosis.

“There’s no evidence that cannabis causes psychosis,” said Mr. Dolce, who pointed out that no one had ever died from having overdosed on tetrahydrocannabinol, the active psychoactive ingredient in marijuana.

Aaron Lachant, the chairman of the board of MMLG, a California consulting firm for those looking to enter the cannabis business, said the future of the marijuana industry in New York would largely depend on how the state government manages the legalized market.

In California, he said, high taxes on legalized marijuana had led to a booming black market that offered “cheaper but not safer” marijuana from unlicensed sellers.

“New York needs to wrestle with how to transition people from the unregulated marijuana market to the regulated one,” Mr. Lachant said.

Unlike in California, where legal cannabis is dominated by corporations with large financial reserves, New York should create a market that is also open to small-business people, he said. “How we set the rules is going to determine who runs the businesses.”