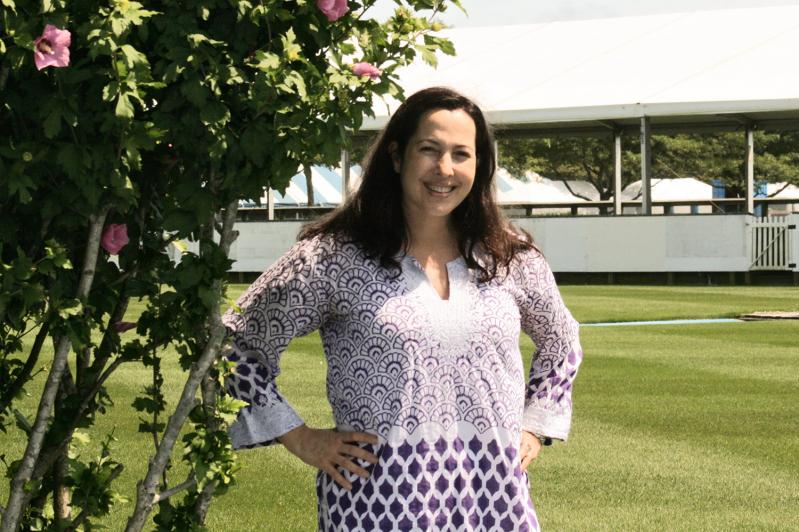 Shanette Barth Cohen, the Hampton Classic’s executive director, would always rather be busy than not. She certainly is now.
Jack Graves
By Cecelia H. Scheuer

As the grand finale of the summer season, it often seems as if the Hampton Classic passes by in the blink of an eye. In what is sometimes a matter of hours, tents are taken down, horses and riders are shipped off to different locations, and tourists vacate the South Fork to return to the hustle and bustle of everyday life.

But preparing the illustrious grounds for the horses, riders, and thousands of people who will return to the weeklong spectacle this year began almost the minute last year’s show ended.

“It’s quite an operation,” said Shanette Barth Cohen, who has been the executive director of the Hampton Classic for the past 14 years — her first exposure to the event was as a competitor in 1980. Now, 39 years later, she oversees everything from tent assembly to the operation of spa stations for the horses.

The last two weeks leading up to the Classic are “absolute crunch time,” she said. “For some, it’s more hectic than when the actual show is up and running.” In the span of about three weeks, over 100 staff and crew members are on hand at the 60-acre Snake Hollow Road, Bridgehampton, showgrounds preparing for the equestrian extravaganza.

Diversified Services, the operation’s “earthworks” specialist, is the umbrella entity that oversees a network of tent, grandstand, and bleacher companies responsible for erecting 1,600 stalls, numerous party-grade tents, and more than 80 vendor tents throughout the property. Diversified Services also constructs the roads, provides sand, soil, and gravel as needed, and installs the drainage systems.

One of the most technical aspects of show preparation is jump-building, for which the Classic has two of the top course designers in the field — Michel Vaillancourt, an Olympic showjumper, and Steve Stephens. Described by Cohen as “tough but fair,” their courses demand that both rider and horse exercise extremely precise judgment.

Although the show’s full-scale setup usually takes off at the beginning of August, the showgrounds, particularly its grass rings, must be maintained the year round. “In the winter, I will be sitting at this desk while people are mowing lawns, trimming the hedges, and shoveling the snow in front of the port-o-john.”

Cohen finds it is usually best to just trust the process amid the chaos of such a vast undertaking. “The horses and people will be here whether we are ready or not.”

Luckily, there is virtually nothing the forces behind the Hampton Classic can’t handle when it comes to ensuring preparedness. Not even Hurricane Irene, which hit in the summer of 2011, postponing the Classic’s opening for three days. Cohen and her staff decided on the Friday night before Irene was to arrive to tell competitors they would not accept any horses until further notice.

“We basically took down everything we had spent a month building — stables, tents, canvases — in 48 hours,” she said. “Monday morning, at 5 a.m., we started rebuilding and had to readjust the schedule to fit all the competition in from Wednesday on. In the end, there was only one class that didn’t run. All six rings were used on Grand Prix Sunday.”

This year, the Classic will allow horses to be shipped in tomorrow. Some horses — there are more International Federation for Equestrian Sports horses than ever, about 130 — are to come from right down the road; others will be shipped in from Europe, Mexico, and Canada. Ten different countries are to be represented in this year’s competition, according to Cohen.

Tomorrow is also when security will begin to supervise vendors setting up their merchandise tents, and when the Heart Equine Ambulance will start to frequent the site. “We actually have human ambulances and horse ambulances,” said Cohen, who serves on the board of the Equine Ambulance, a nonprofit entity. “This is something that is very important to us — it’s not required for a lot of horse shows, but we have had it for the past 15 to 20 years.”

Cohen and her staff sometimes joke that “the horses are treated better than the humans here,” a claim that might not be that much of a stretch. Magnetic blankets and vibrating boards for the horses to stand on are only some of the amenities at their disposal.

Horses are bathed daily before and after competing, and are frequently treated by acupuncturists and horse massagers to ensure that they are in the best health possible. “A horse will usually bring about three humans with them on average,” Cohen said. “All of the same treatments you see humans getting — especially high-performance athletes — a lot of these techniques are used on horses to make sure their fitness is at a peak to avoid injuries.”

This year, Mane ’n Tail, a longtime partner of the show, will provide spa stations with complimentary products for all the wash stalls.

Fancy treatments and multimillion-dollar horses aside, Cohen works hard to make the Hampton Classic, and the sport of horseback riding in general, more accessible to the community. “We draw an audience that’s not just people who are regulars at horse shows,” she said. “A lot of them don’t know much about the sport or know about it only from a distance.”

Improving accessibility, though, is a task that begins with training on-site staff, particularly those dealing with parking and security, which results in her receiving countless appreciative emails each year. “We recognize that anyone working here is representing the Hampton Classic — I always give them a pep talk,” she said. The parking and security staff “really are the face of the Classic. At times, they might be the only interaction people will have with our staff.”

Riders are also encouraged to interact with the community in whatever way they can, whether it’s signing an autograph or even throwing a cap into the crowd. The three-time Olympic medalist McLain Ward (a seven-time Grand Prix winner here) is a consistent crowd pleaser, said Cohen, who cited Georgina Bloomberg, a renowned equestrian who also is a crowd favorite on Grand Prix Sunday, as an example of a professional rider who does a lot of volunteer and community service work.

“It’s certainly good for the sport when we have a way of interacting with the community,” Cohen said. “We ask often for those riders to come talk to a sponsor and their guest or a school group, and there are quite a few of them who are happy and willing to do that.”

When all is said and done, the eight days allotted to the show feel all too short for many of the attendees who eagerly anticipate the event each year. “We get asked a lot if we can do a series of horse shows instead of just one,” Cohen said, “but the way that the property is zoned allows us only to operate for those eight days. Still, it’s always nice leaving people wanting more — it’s one of the things that make this event so special.”

The Hampton Classic will open Sunday and run through Sunday, Sept. 1. Sixteen hundred riders are expected to compete, and around 45,000 to 50,000 people are expected to attend during the course of the week.

General admission is free on Monday. Daily admission is $10 per person or $20 per carload, and free for those under 6 years old. Entry is free for senior citizens Tuesday through Thursday, and kids get in for free on Kids Day, Saturday, Aug. 31. More information and tickets are available at hamptonclassic.com.