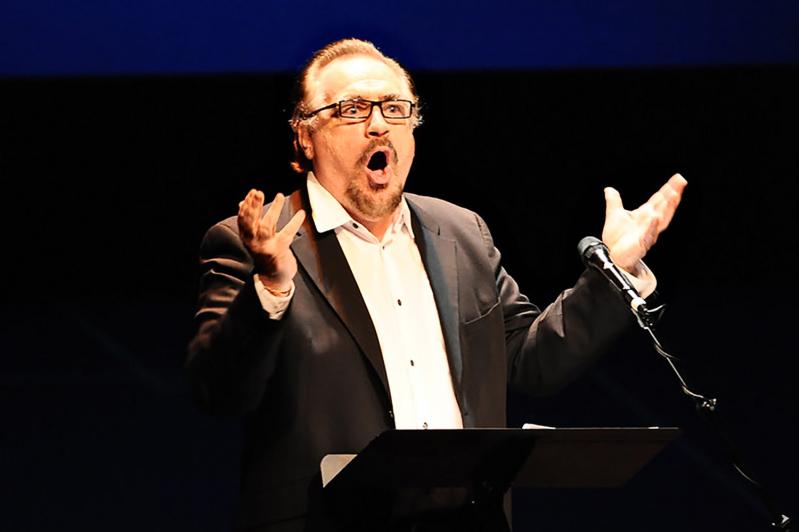 Punctuated by torch songs performed by Emily Bergl of “The Marvelous Mrs. Maisel” and Holt McCallany of “Mindhunter,” the program will include letters from Peter Abelard, Orson Welles, Napoleon Bonaparte, Benjamin Franklin, Frida Kahlo, Vladimir Nabokov, and Amelia Earhart, among many others.

“This is our eighth time at Guild Hall doing beautiful shows with these great actors raising awareness for WordTheatre in the Schools (WITS) and the Pushcart Prize,” said Cedering Fox, the founder of WITS and creator, producer, and director of “Hearts Aflame.”

The actors, all of whom donate their time and talent, include Brian Cox of “Succession,” which just launched its second season on HBO; David Call, Fernando Villegas, Jihae, Liisi LaFontaine, Nicole Ansari, Sarah Clarke, Spencer Garrett, Vincent Piazza, and Xander Berkeley, as well as Ms. Bergl and Mr. McCallany.

Ms. Fox launched WITS in 2003 with her producing partner in Britain, Kirsty Peart, to bring the world’s best literature as performed by distinguished actors, writers, and musicians to audiences ranging from underserved students to cultural enthusiasts.

The roster of talent committed to the programs has ranged from Joyce Carol Oates to Jeff Goldblum, T.C. Boyle to Julianna Margulies, J.K. Simmons to Mr. Cox, whom Ms. Fox first met when she was starting the venture. “I think it’s my passion that gets people interested,” she said, adding that the participants’ enthusiasm for the programs often leads them to enlist colleagues.

Ms. Margulies’s manager connected Jeff Goldblum with Ms. Fox, “and he ends up chasing after me saying, if you ever need me, just call me,” she said. “The reason they do it is they all know they’ll be excellent when they perform because they’re well-rehearsed and they have the script there, so they can do a full-blown performance without having to memorize.”

After reading at a middle school in Los Angeles, Mr. Simmons, an Oscar and Golden Globe-winning actor for his role as the abusive music instructor in “Whiplash,” left that character behind when he wrote to Ms. Fox:

“My experience with WordTheatre, both in the schools and in performances for general audiences, has been enlightening and uplifting and hilarious and educational . . .  It’s made me a better, more well-rounded, more empathetic person.”

Mr. Cox will read Benjamin Franklin, Jihae will channel Anais Nin, and Mr. Berkeley and Ms. Clarke, who are married, will be Napoleon and Josephine. The actors will introduce their segments to place the letters in context; musicians will accompany the torch songs and add musical elements when relevant, for example pairing classical Spanish guitar with the words of Diego Rivera.

Ms. Fox’s mother, Siv Cedering, was a Pushcart Prize-winning poet and artist who lived for many years on Further Lane in East Hampton before she married her second husband, the sculptor Hans Van de Bovenkamp, and moved to Sagaponack.

“I met Bill Henderson, the publisher and editor of Pushcart Press, through my mother,” said Ms. Fox. Many writers, among them Celeste Ng and Peter Orner, owe their success in part to the prize. “Literature is fighting for its life. It means so much to Bill that we do this, just to be keeping Pushcart out there.” None of it would be possible, she added, without the Oster Family Foundation, which has supported WITS since 2007.