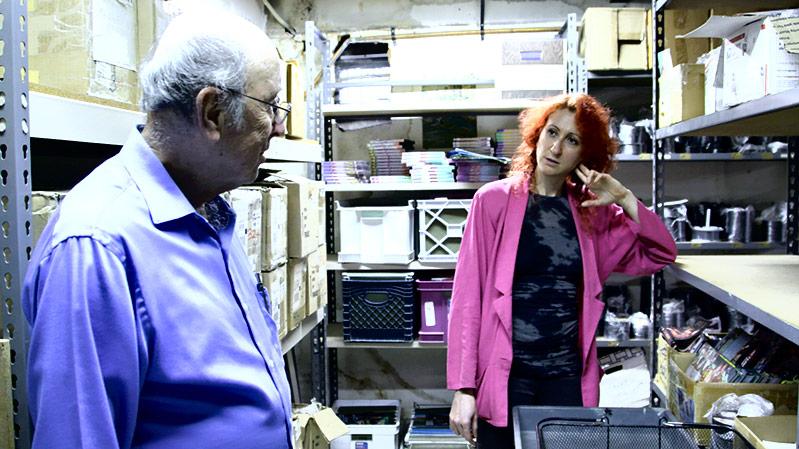 Barry Mason and his daughter, Rachel Mason, during the filming of “Circus of Books”
Netflix
By Jennifer Landes

Their story, told through the eyes of their daughter, Rachel Mason, is the subject of “Circus of Books,” the next and final film in the Hamptons International Film Festival’s SummerDocs series.

The movie is a study in contrasts. From her mother sorting through merchandise such as cock rings at the beginning of the film to her work at a Jewish synagogue, viewers are presented with a complex portrait of a couple who did what they needed to do to make a living in modern America while maintaining a traditional household.

At the same time, they were surprisingly sanguine about their business and supportive of a community that felt at home in the Masons’ spaces in West Hollywood and Silver Lake. Ms. Mason, who like her siblings did not fully comprehend the family business until late in her childhood, said via phone last week that her parents “were strait-laced, but they were out on a limb, taking risks.”

Early in his career, Mr. Mason used his inventive and technical mind in the film industry and later designed a medical device that he left his job to market. When the profits that supported the family dwindled, Mrs. Mason suggested answering Larry Flynt’s ad for distributors of his magazine Hustler. She had interviewed Mr. Flynt when she was a journalist before she started a family. Then opportunity knocked, and soon they were the proprietors of the Circus of Books on Santa Monica Boulevard.

It was just post-Vietnam, when men came back looking for a place to go in a city and country still hostile to them and the gay community. In the years following, the AIDS crisis struck their clientele and employees, whom they supported during their illnesses.

“We witnessed an epidemic, hundreds of people dying, waves of people who would come and go,” Rachel Mason said. “We would get to know them and then they were gone, beautiful young men, really nice people.”

She said was amazed by how much her parents kept “a total separation between trying to be a normal soccer family, totally middle class in every respect, religious really . . . and managing a crisis on the other hand.”

During the Reagan and Bush years, a federal effort to stop the adult film business used the postal service to crack down on distribution to areas where strict obscenity laws were in place. Mr. Mason was indicted and almost went to jail for sending material to Pennsylvania.

“They were really close to going to jail for a long time” and losing everything, their daughter said. That was a real revelation to her when she interviewed their lawyer for the film. “He had many clients that went to jail during that time.”

The film’s apparently charmed existence — accepted by the Tribeca Film Festival, Ryan Murphy as an executive producer, and Netflix picking up distribution weeks before the festival — was not as it seemed.

As a longtime performance artist working outside the mainstream, she said she is very grateful for the interest in “Circus of Books” but is still coming to terms with it. “I mostly perform in music clubs and museums. My last film was an art house film, and it toured in a really different context.”

Her perspective as an artist helped drive the film’s execution and scoring. She credits industry professionals such as Kathryn Robson, the editor, and Cynthia Childs, a producer, with giving it its form.

She is also excited to be in a media landscape that is changing for the better, with which she credits Mr. Murphy as being a key player. When she grew up in the 1980s and ’90s, “there was not this type of explosion of really interesting new voices who have emerged and entered into the mainstream. . . . I feel lucky that what I’m doing aligns with where we are culturally.”

“Circus of Books” will be screened on Saturday at Guild Hall at 7 p.m. A discussion will follow with Ms. Mason, Alec Baldwin, and David Nugent, HIFF’s artistic director. Tickets are $25, or $23 for members.