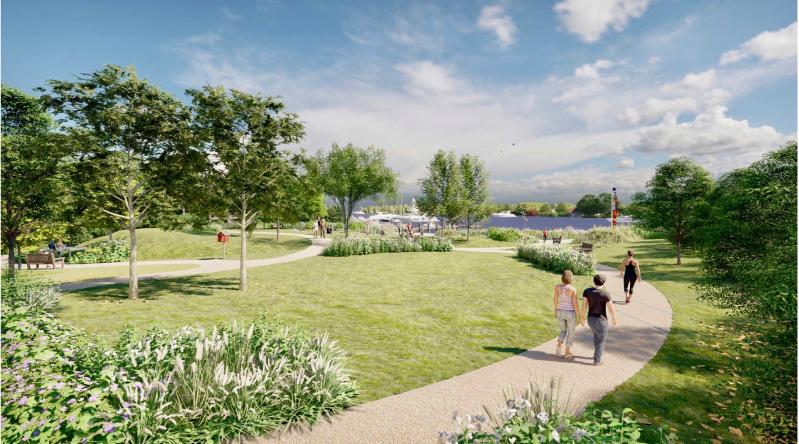 Community members joined state, town, and village officials to celebrate the official opening of Steinbeck Park in Sag Harbor on Friday morning in a ceremony that culminated with the signing of an inter-municipal agreement transferring management of the park from Southampton Town, which purchased the property in July, to Sag Harbor Village.

James Larocca, a Sag Harbor Village Board member, delivered the opening remarks, speaking to the importance of engaging with the history of the village's waterfront, from its time as a whaling port starting in the 1700s to the industrial era. "Communities with our kind of history are constantly changing their relationship with the waterfront," he said. "This year, the wharf is going to be renewed again as part of that waterfront economy that is still very much a part of who we are."

Mr. Larocca took time to thank the volunteers, engineers, and landscapers under the leadership of the landscape designer Ed Hollander and elected officials who gave their time and spirit to bring the vision of the waterfront park to life. Among the elected officials in attendance who played an important role in making the park a reality after four years of negotiations were Thomas Gardella, deputy mayor and village board member; Tommy John Schiavoni and John Bouvier, a Southampton Town councilmen, New York State Senator Kenneth P. LaValle, and Suffolk County Legislator Bridget Fleming.

Mr. Larocca also thanked former Sag Harbor mayor Sandra Schroeder, who worked with him to negotiate for a community preservation fund purchase of the 1.25-acre waterfront property. Southampton closed on the $10.5 million purchase of the park on July 24.

Southampton Town Supervisor Jay Schneiderman expressed hope that the park would become a place for the community to learn about and appreciate the history of Sag Harbor. "This area has a host of incredible people and writers and people who have made tremendous contributions to our area, state, and country," he said. The park was named after the American literary icon John Steinbeck, who wrote "The Winter of Our Discontent" in Sag Harbor, which he often referred to as his "handsome town."

Mr. Schneiderman also provided a glimpse into potential park additions and improvements, saying he hoped there would be "some walkways and viewing areas and a little pier that goes out to the harbor."

Senator LaValle commended State Assemblyman Fred W. Thiele Jr., who could not attend the event but was instrumental in bringing the purchase to fruition. He also spoke to the vitality of preservation, and not just of the land itself. Preserving our heritage and history, he said should a "number-one incentive" of the community.

Ms. Fleming said she was confident that the park would offer her constituents in Sag Harbor and beyond a chance to strengthen their connections with one another and to the village.

Sag Harbor Mayor Kathleen Mulcahy echoes those sentiments, saying that she wanted the scope and purpose of the park to be defined by the people. "Today marks the beginning of a new look for Sag Harbor Village," she said. "In the next 12 months our hope is that people will wander in and will teach us how they want to use this park. . . .This is our start, but it's not our finish."