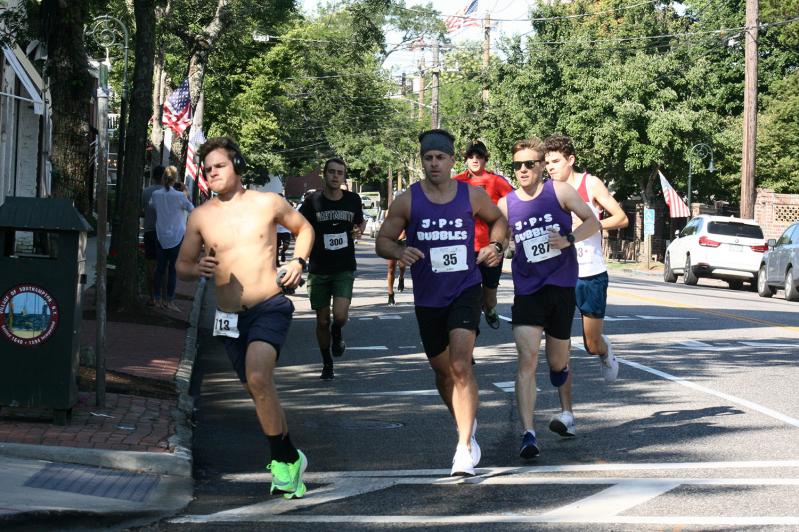 Luke Ellwood, the eventual winner of Sunday’s Strides for Life 3-miler in Southampton, can be seen at right in the light singlet as the lead pack turned the corner at Job’s Lane.
Jack Graves
By Jack Graves

The Strides for Life 3-miler in Southampton Sunday morning drew a field of around 600 and made significant fund-raising strides as well for the Lung Cancer Research Foundation, to the tune of about $365,000.

The race, which drew 18 teams running and/or walking in memory of those who have died of the disease, was won by Luke Ellwood of Port Washington, a junior at Regis High School in New York City, where he runs cross-country and track, the mile primarily.

It was the first time for Ellwood, whose mother is from Sag Harbor, at Strides for Life, and he did himself proud, outkicking two opponents, Charles Parsons and Malachi Price, in the final yards on the way to the finish line in front of the Southampton Cultural Center. The trio had more or less run together for the length of the flat course, on what Tara Farrell of East Quogue, the women’s winner (and sixth over all), described as “a perfect day.”

It was Ellwood’s first race of the summer, he said, though he has been “training a lot.” His winning time was 16 minutes and 31.8 seconds, which he agreed was good.

Farrell, who turned 40 this past November, has been running well of late, having topped the females in the Race of Hope to Defeat Depression 5K in Southampton the week before, and on Sunday did the same, kicking it in at 18:07.9 — a 6:03-per-mile pace.

A former Gubbins Running Ahead employee who now works in the Southampton Town Clerk’s office, Farrell, who often runs around Lake Agawam before work, said she would run — for the first time — in the New York City Marathon this fall. “I ran a 3:14 at the Long Island marathon in May — I’d love to break 3:10 in New York. I’d be happy with that, for sure.”

She said, in reply to a question, that she’d be at Ellen’s Run this Sunday, a popular 5K overseen by Julie Ratner that is based at Stony Brook Southampton Hospital’s Parrish Hall.

As aforesaid, there were 18 teams at the race — Team Heidi apparently being the top fund-raising one, with a $132,450 donation. Team JPS Bubbles, led by Gambrelle Snyder, the 2016 female winner and the runner-up Sunday to Farrell, may have been in the middle of the pack fund-raising-wise, but could boast the fastest runners.

But perhaps the most appealing Strides for Life story racing-wise was Sanders Gorton’s time of 21:29.6, which bettered by far the goal of 22:30 that Geary Gubbins, a former Duke University track star whose parents, Justin and Barbara, own the Gubbins Running Ahead stores here, had set for the 10-year-old, a fourth grader at Saint David’s School in New York City.

Gubbins said the Gortons had long been customers of his at Gubbins’s Southampton store, and that while he wasn’t Sanders’s coach, he was happy to run with him that day.

The 10-year-old ran a 23:10 at the recent 5K in Sag Harbor in memory of the late Marine Lance Cpl. Jordan C. Haerter, and had done 22:50 the week before at the Race of Hope to Defeat Depression.

Nearing the line with Gubbins on Sunday, on his way to a 17th-place finish, Sanders was elated as he saw the time on the clock.

“He has the skills,” Gubbins said after they’d crossed the line. “We passed a kid his age who was wearing khaki shorts and had run the first mile in 7 minutes. When we passed him, he said, ‘I wish I were wearing other clothes!’ ”

“We beat our 2-mile goal,” Gubbins continued, “which was to be under 15 — we were at 14:40 — and then we finished strong, passing people in the last mile. . . . In these races you don’t want to slow down between 2 and 2.5 miles. You don’t want to slow down too much there, and, hopefully, you can maintain that pace and run the last half-mile strong, which is what he did.”

When this writer said he hoped Sanders would not burn out, his mentor said, “You don’t want to become too focused on time. Racing is about competition, about beating people in your age group and to keep on doing it.” He could definitely see a Division 1 school in Sanders’s future, Gubbins added, in answer to another question.

The boy’s father, David Gorton, who was standing nearby, said, “I can’t keep up with him anymore.” And then, as he looked out onto the street, “There’s my daughter,” Kit, a 6-year-old who has also, the elder Gorton said, been running well.

Gubbins said he also plays golf, at the Southampton Golf Club, which he joined two years ago, though he acknowledged that given his 16-handicap he was “a much better runner than a golfer.”

Questioned further about his love for the game, he said, “I like being out there with my friends, to be outside without cellphones, just enjoying living out here in our beautiful natural surroundings. That’s why we live here, right? Thinking about how lucky we are to be here. . . . At least that’s what I think when I’m hitting the ball straight!”