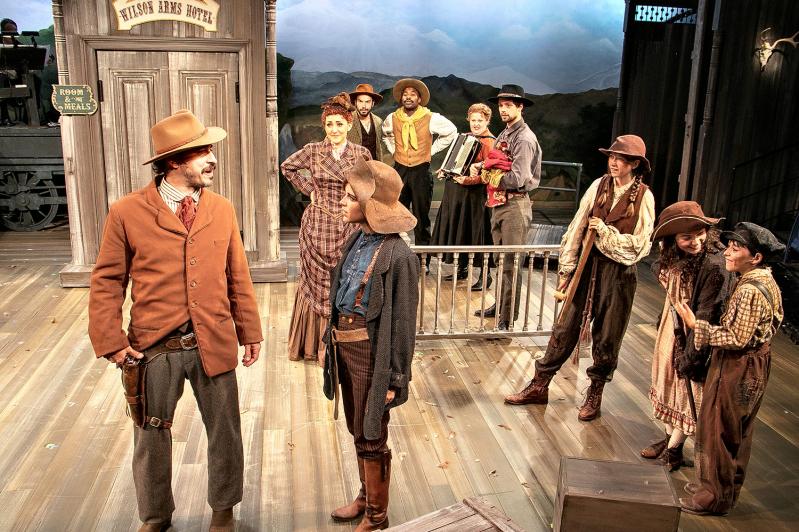 All plays and musicals are products of their time. The trick for a director is to find a way to contextualize them, or make them speak urgently to the here and now.

Our here and now happens to be Donald Trump’s America. So, a play once lambasted for its ostensibly racist treatment of Native Americans and prehistoric attitudes toward women — not to mention reminding us of the country’s outdated gun laws, especially in the wake of the latest shooting spree — is suddenly, brilliantly, contemporary.

Hats off then (or should that be Stetsons?) to Sarna Lapine, the director of Irving Berlin’s great musical “Annie Get Your Gun,” now playing at Sag Harbor’s Bay Street Theater.

This is a bighearted production with about half a dozen irresistible Berlin standards that all hit their mark, including “There’s No Business Like Show Business,” “I Got the Sun in the Morning,” “You Can’t Get a Man with a Gun,” and the all-time favorite “Anything You Can Do (I Can Do Better).” But it is Alexandra Socha’s sassy portrayal of Annie Oakley, the real-life Oklahoma backwoods urchin who became a global sharpshooter superstar, that is so fabulous you can almost overlook the often-clunky plot based on a cute, dopey story involving stereotypical characters and exclamations like “Jumping geraniums!”

Ms. Socha’s voice is an extraordinary thing; she’s a brass-lunged belter in numbers like “Doin’ What Comes Natur’lly,” when she’s all hands-on-hips brawn. But then in “Falling In Love” she is “soft and pink as a nursery,” as the lyrics go, and even displays astonishing breath control in “Anything You Can Do I Can Do Better.”

With several Broadway credits to her name, this leading lady manages to walk the fine line between comedy and tenderness in the real and heartfelt struggle of her character. Here at Bay Street, anything Ms. Socha can do, not too many others in the show can do better.

That is not to say the others pale. Far from it. This cast of mostly young actors, many from the New York City stage, and a few junior members drawn from local talent, are fabulous. They act, sing, dance, play the fiddle, the accordion, the washboard, and the guitar among them, and play them exceedingly well. They are full of energy, inviting us into their fun and games, and giddy hoedowns, as members of the legendary Buffalo Bill’s Wild West Show. Especially noteworthy is George Abud as Charlie, the smarmy, hand-wringing manager of the traveling, circus-like show.

“Annie Get Your Gun” was conceived in 1945 by the brother-and-sister team of Dorothy and Herbert Fields, and Berlin was hired to write the musical score. Catchy show tunes notwithstanding, this charming rom-com musical has endured largely because of the universal relevance of its battle-of-the-sexes storyline, based on the exploits of a real-life figure, Phoebe Ann Mosey. Nearly a century before Billy Jean King and Bobby Riggs squared off on the tennis court, Mosey, who took the stage name Annie Oakley, entered a shooting contest against her future husband, the professional marksman Frank Butler.

But the original show, which opened on Broadway in 1946 with Ethel Merman in the lead role, relied heavily on cultural assumptions about race and sex. To get the jokes, audiences needed to appreciate the stereotypes, and soon the jokes wore thin. “Annie Get Your Gun” was not a show to warm the hearts of feminists, since our heroine could only get her man by deliberately losing to him in a shooting match. The 1940s stereotypes left the show creaking with age, and the play was largely marginalized as material for high school productions and community theater.

Then in 1999, the veteran librettist Peter Stone (he wrote the book for the 1997 Broadway show “Titanic”) drastically reshaped and revised the musical, excising much material featuring indigenous peoples, including, thankfully, the racially dubious song “I’m An Indian Too.” By wisely toning down the misogyny and racism, the new version declares the climactic shooting match between pint-size Annie Oakley and egotistical Frank Butler to be a draw. It also adopts a quasi-Brechtian distancing technique by framing the action as if it were part of a vaudeville show staged by Buffalo Bill’s Wild West revue.

It’s this reworking on which Ms. La­pine, the talented director whose recent revival of “Sunday in the Park With George” starring Jake Gyllenhaal and Annaleigh Ashford is now on London’s West End, bases her production. Breathing new life into the original script, she also emphasizes historical references to Oakley, found in books such as Glenda Riley’s “Life and Legacy of Annie Oakley,” in which she writes that the female trailblazer fought to “campaign for equal pay for women. She also taught women how to shoot and had a partnership marriage with her husband, Frank Butler, who gave up his career in show business to become her manager.”

Even if the central message here seems a little off-key at times, Bay Street’s “Annie” offers a charming musical about the business of show business — and in this production, show business is exactly what you get. A simple but clever set (Mikiko Suzuki MacAdams) enhanced by even cleverer lighting (Jiyoun Chang), fabulous costumes (Valerie Therese Bart) and choreography (Sarah O’Gleby), as well as a stellar bluegrass band onstage, lend the perfect touch of spectacle.

Due to popular demand, “Annie Get Your Gun” has been extended through Sept. 1. Show times are Tuesdays, Wednesdays, and Sundays at 7 p.m., Thursdays through Saturdays at 8 p.m., and 2 p.m. matinees on Wednesdays and Sundays, starting Sunday.