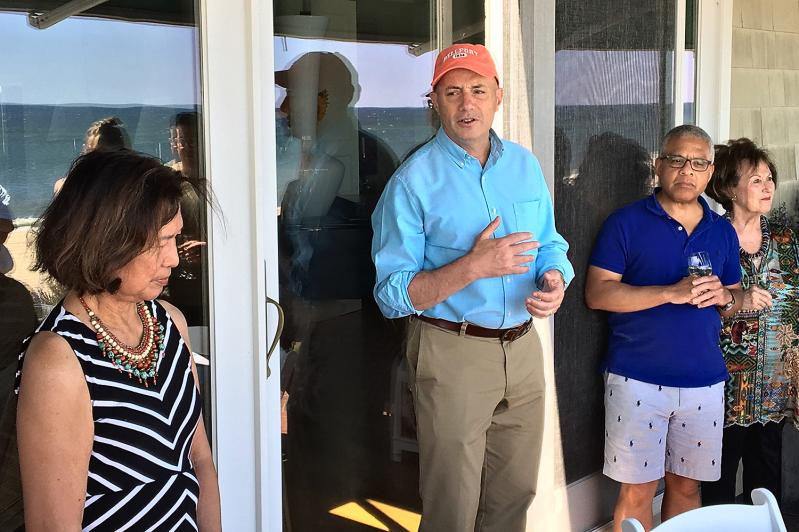 Perry Gershon, an East Hampton resident who narrowly lost a bid to unseat Representative Lee Zeldin last year and plans to challenge him again next year, made pointed remarks about recent mass shootings in the country to supporters on Saturday.

During an informal gathering at the East Hampton residence of Loida Lewis, Mr. Gershon harshly criticized President Trump’s rhetoric over the last month, which he called racist, vengeful, and “tragic for this country.” There is little to be optimistic about, he said, “other than we have an election coming up” and “can finally end it,” referring to Mr. Trump’s tenure.

Making just one reference to Mr. Zeldin, Mr. Gershon instead focused on the Aug. 3 mass shooting in El Paso in which 22 people were killed, and, hours later, another in Dayton, Ohio, in which nine more died.

“The events of last weekend got to me, because you really had two trends coming together and showing how bad things can get when this happens,” he said. “You have the gun situation in America, which is out of control, has been known to be out of control since Columbine,” a reference to the 1999 mass shooting at a high school in Colorado, “and we’ve done nothing about it.”

Yet another mass shooting at a high school, last year in Parkland, Fla., “got people’s emotions up, and maybe people started to think something would come out of it, we’d make change,” the candidate said. “And nothing happened, again.”

“At the same time, the president has been spewing this racist rhetoric in a worsening manner since he got elected,” Mr. Gershon said, “but it’s gotten a lot worse in the last month or so,” referring to Mr. Trump’s pronouncements via Twitter in which he referred to four nonwhite congresswomen, three of whom were born in this country, who, he claimed, “originally came from countries whose governments are a complete and total catastrophe,” and said that they should “go back and help fix the totally broken and crime infested places from which they came.”

More recently, the president targeted Democratic Representative Elijah Cummings of Maryland, who not long ago issued subpoenas for the personal emails of Mr. Trump’s senior officials, including his daughter and son-in-law, calling the congressman’s district “a disgusting, rat and rodent infested mess” and a “very dangerous & filthy place.”

“It’s racism,” Mr. Gershon told the gathering. “It’s veiled revenge at his opponent, because Elijah Cummings is investigating Trump, so this is his way of getting back. But in all this, he’s empowering racists to go and take bad actions. He’s talked about an invasion of Mexicans, then a crazy person puts out a manifesto and says, ‘I’m going to take action on my own and deal with the problem that Trump has described.’ Those two things came together last week, and it’s tragic for this country. We need to do something about it.”

Referring to the first debates between Democratic presidential candidates, he appealed to them to not attack one another. “I am very optimistic,” he said. “We’ll do well in this election.”