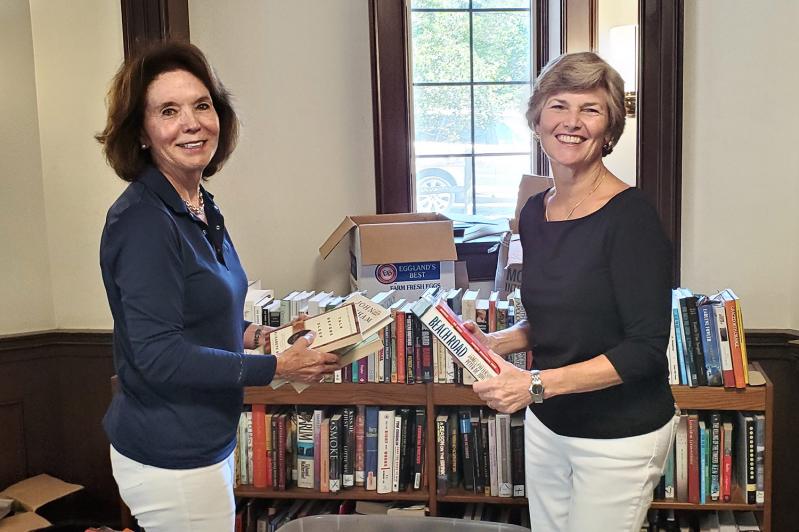 Gail Parker, left, and Debbie Walter help to sort and price the books donated to the East Hampton Library so that some can be sold on Amazon.
Dennis Fabiszak
By Juliet Homes

To many residents, the East Hampton Library means a maze of books and helpful librarians tucked into gorgeous architecture, with $1 coffee to boot. Behind the stacks, a little secret helps make it all possible: Amazon.

Amazon and the library may seem to be a strange union. Long considered an enemy to established and independent booksellers, Amazon’s 17 new brick-and-mortar stores in the United States — one is in Manhattan as of 2018 — contribute to the company’s reputation as a ruthless competitor. For the East Hampton Library, however, Amazon has become a way to monetize the wealth of donated books the library receives.

Every year thousands of books, many of which are quite obscure and rare, are donated through the library’s exchange programs. Dennis Fabiszak, director of the library, believes that most town residents know very little about the ultimate course the books take after donation.

Once a book is donated, it goes immediately to sorting. Library employees separate books into three categories: the exchange area, the library’s permanent collection, or to be sold on Amazon.

How did this small-town library’s relationship with the corporate behemoth begin?

As of 2014, the library’s sales were entirely local. Mr. Fabiszak and his staff hosted book fairs three times a year when enough donations had accumulated. Mountains of books were stacked for people to take for just a dollar apiece. The fairs were relatively profitable. Mr. Fabiszak estimates that the library made between $200 and $300 at each fair. While the money was certainly welcome, the amount of effort each fair required to organize and publicize taxed the library staff.

The director came up with the idea of putting donations on Amazon. They started with just 100 books, listed at the prices Amazon recommended. Within an hour, they sold a rare volume on gas engines for $275, equivalent to what they would have made after an entire day’s book fair.

What was an experiment has become a central part of the library’s fund-raising. The library now posts a steady stream of rare books on Amazon for collectors and enthusiasts around the world. An entire downstairs room is devoted to Amazon sales, stacked top to bottom with books on every imaginable topic.

Mr. Fabiszak is happy with the results. “As a library, it is our goal to bring information to people,” he said. “By selling on Amazon, we can do so for a much vaster audience, allowing people access to this information that they wouldn’t otherwise have.”