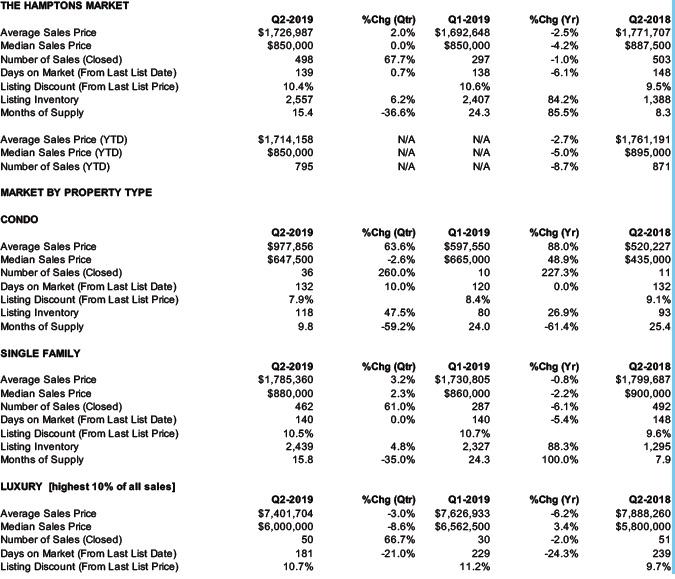 East End home sales in the second quarter were at an eight-year low, according to a report from the Douglas Elliman agency.

The decline has continued to adversely impact revenues for the Peconic Bay Region Community Preservation Fund, which Assemblyman Fred W. Thiele Jr. announced on Monday were nearly 24 percent lower thus far this year than in 2018.

The Douglas Elliman report said second-quarter sales were down 1 percent from the same period in 2018, marking the sixth straight quarter of declining sales. The rate of decline, however, was much smaller than in previous quarters, the report said. “We are seeing some evidence of stabilization,” said Todd Bourgard, a senior executive at the agency.

The market, according to the report, has been negatively impacted by the tax reform law signed by President Trump in 2017, which limited mortgage interest deductions, and placed a $10,000 cap on the amount of state and local taxes — including property, income, and sales taxes — people can deduct on federal returns. A recent drop in mortgage rates, however, may have offset the tax law’s repercussions, it said.

A report from the Corcoran Group said South Fork sales had declined by 26 percent compared to the second quarter of 2018. “Nearly every area registered a decrease,” it noted. The outliers were Shelter Island, which had a 6-percent increase in sales, and Amagansett and Montauk, where sales remained on par with last year.

Shelter Island’s C.P.F. revenues increased by more than 37 percent compared to the first six months of last year. East Hampton’s revenues decreased by a little more than 30 percent, Southampton’s by more than 23 percent, Riverhead’s by nearly 27 percent, and Southold’s by 7.5 percent.