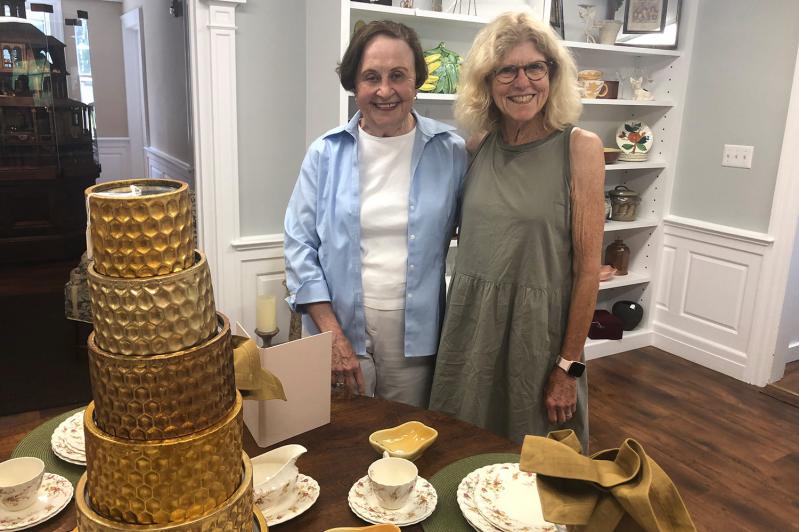 Sally Krusch wishes the Friends of the Montauk Library had a few more young volunteers to do some of the heavy lifting — literally and figuratively.

Ms. Krusch, the president of the Friends’ board of trustees, said it could benefit from more help with administrative tasks and event planning, and also with the actual carrying of boxes of books. Its roster of volunteers consists mostly of retired folks — Ms. Krusch is 70, and there’s even one member in her 90s — and books are heavy.

“It’s been a tough haul to get more people on the board, and hard to get a lot of young people,” she said. “Sometimes it’s nice to have people to give you a different perspective, and then the young people’s perspective, I think we don’t have it.”

Friends of the Montauk Library is among a number of local organizations that are seeking a fresh generation of young volunteers not just to help out now, but also to carry on their long-running traditions and services to the community.

Lillian Tyree-Johnson worries sometimes about the Bridgehampton Village Improvement Society, which maintains flower boxes and sponsors festive trees at Christmastime on Main Street, among other things. People sometimes take those things for granted, she said.

“People don’t understand what they do and how much they actually do,” said Ms. Tyree-Johnson, a 15-year member of the society who is its treasurer. “To have that lack of interest by the next gen, some of these things might fall to the wayside and suddenly you don’t have Christmas trees on Main Street or flower boxes in town. The town doesn’t do that. It’s taken on by this organization and this group of people.”

At 54 years old, she is one of the youngest members of the society. She also pointed out that many volunteers are involved with multiple community groups at once. Ms. Tyree-Johnson is also president of the Bridgehampton Community House Association, an organization she has been involved with since her father asked her to volunteer about 20 years ago.

“We do have an aging population. Who is going to be the next generation, or do they not even realize there’s a need?” she said. “The numbers are shrinking.”

According to Ann Davis, president of the Ladies Village Im provement Society in East Hampton, and Patti Ferrin, the organization’s membership chair, the L.V.I.S. has about 350 members, but only half as many are active volunteers. There are two high school students among them. Many are part-time residents of East Hampton or are older and not able to put in as many hours, the two women said.

“Certainly it’s an issue we’ve tried to deal with. . . . Most volunteers are of retirement age,” Ms. Davis said. “The younger people are in the minority. How do we make it easier for people to volunteer when most are working full time?”

Ms. Ferrin said volunteering is a great way to make new friends. “That’s the way we get most of our members,” she said. “They move here and decide they want a way to meet people. They find it’s very rewarding.”

The L.V.I.S. has a paid employee specifically hired to do the heavy lifting that some of the older folks can’t do, they explained.

Ever since the L.V.I.S. revamped its website, Ms. Ferrin and Ms. Davis said, more volunteers have signed up online. The membership has also become a bit more racially diverse, they said.

The group hopes a new generation of volunteers will eventually step up to carry on its mission of beautification and education. Not only does the L.V.I.S. maintain trees and flowers in the village, but it also gives out $150,000 in scholarships each year, and they’d like to do even more for East Hampton.

“Look at other communities and see how much of a difference we make,” said Ms. Ferrin, who joined in 1976. “All of the hard work we do, you can see come to fruition.”

The East Hampton Historical Farm Museum is one organization that has reaped the benefits of having a wide age range of volunteers: four generations, according to Prudence Carabine, its president.

“I think part of it is that the Farm Museum is working on supporting the local community in every way possible, so we have teenagers, we have young adults, we have aging adults, and people like me who are 70 and older,” Ms. Carabine said. “But there’s always a need for new blood.”

She said the museum attracted its volunteers by “encouraging an atmosphere where everyone’s thoughts are welcome. It’s kind of a democracy, so if someone has a great idea, they’re encouraged to bring it forward and discuss it, and even work on it, if they wish.”

Ms. Krusch said people sometimes avoid her in social situations because they know she’s going to ask them if they have time to volunteer for the Friends of the Montauk Library. She has observed firsthand how volunteers “are in high demand” — a neighbor joined the Montauk Fire Department before she could even tap her for the Friends, she said.

Springs Fire Department Chief Darrin Downs said that while there is interest among young people, holding onto them is problematic. “I think a lot of our new members come from word-of-mouth and members asking friends and so forth,” he said. “We seem to have a fairly steady stream of young people applying and being accepted. Our biggest issue is retention. Once they find out, after the interview and being told how much time and work it will be, they seem to not be able to dedicate the time, and end up getting out. Some of the younger members have other opportunities pop up and move on . . . sometimes it’s disheartening to see the good ones leave.”

Mark Balserus, first assistant chief of the Bridgehampton Fire Department, arrived by way of the department’s juniors program and stayed on after he turned 18. The juniors program “gives us hope,” he said, but he agreed with Chief Downs that recruiting new arrivals isn’t necessarily the problem.

“It’s that we can’t afford to live in Bridgehampton,” Chief Balserus said. “At least in Southampton, they have the affordable housing. Something like that would help in Bridgehampton.”

Nancy Achenbach, who took over as president of the Sag Harbor Historical Society in May, said the group’s trustees are planning a pie-making demonstration on Friday, Aug. 9, at 5:30 p.m. and a historical craft day for families in early September to coincide with HarborFest. She is banking on these events attracting parents and young people as volunteers.

“We’re hoping upon hope that this craft day will generate some interest,” she said. “We’re hoping to have more of a bigger education outreach at the schools and hopefully get some parents interested in being here, but it’s not going to happen overnight.”

She has assigned the Sag Harbor Historical Society’s trustees specific responsibilities, and said each of those trustees is then building his or her own committee, instead of shouldering the work individually.

“We need to spread out,” Ms. Achenbach said. “We need to build the organization and build the nucleus. I really think it’s starting to work.”

She recalled being a young working mother some years ago and still making time to volunteer in her community.

“There doesn’t seem to be that interest now,” Ms. Achenbach said. “I have yet to figure it out. That doesn’t mean we’re going to try to stop cultivating it. What we have to do before we recruit them is to make it attractive for them to have their young family here. It is small steps.”