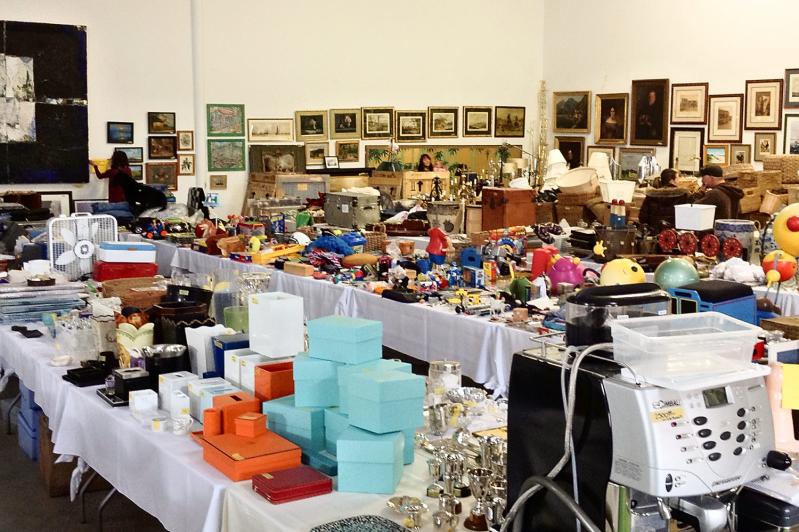 Experts say certain household items should never be put into storage, and Abigail Cane agrees. Her list runs the gamut from antique furniture, white couches, and artwork down to old cellphones, slightly used candles, and clothes that don’t fit.

Ms. Cane is the owner of White Goose Estate Sales, a familiar business on the East End. “What I come up against no less than a dozen times a year is I get a call from a high-profile client who sold their house and they didn’t think. They said, ‘I’ll just buy another house and I’ll put everything in storage, people think that storage is an answer.”

Instead, she said, de-cluttering and selling what you don’t need is the right thing to do.

“To me, storage goes against everything ‘green,’ ” Ms. Cane said. “You’re taking up space in a place where we don’t have a lot of space. It’s things that could be used by other people, and they’re just doing nothing. And things go into storage looking one way and never come out looking the same way, so you’ve actually created garbage. Also, you wind up with the problem of how do you liquidate from storage.”

In 2018, the journal Psychology Today published research that showed getting rid of knickknacks and “neglected piles of paper” was good for your emotional and mental health.

“All of this clutter, physical and mental, can interrupt your flow . . . both your ability to move and your ability to think,” wrote Dr. Susan Krauss Whitbourne. “It turns out that your well-being could also become victim to what we might call the ‘clutter effect.’ A collection of recent studies on stress, life satisfaction, physical health, and cognition all speak to the value of streamlining.”

That’s one reason the KonMari clean-up method, made famous by Marie Kondo, is something of a phenomenon. The method — studying an object to determine whether it brings joy and can be stored in its place with nothing hidden — is just a starting point. Ms. Cane said.

“I try very hard to get all of my clients to slow down. Take a breath. Touch it, feel it, ‘Marie Kondo’ it,” she explained. “Does it make you feel something? If you have an emotional connection to something, please keep it because you can’t replace emotion. Storing something because you are emotional makes sense, but if you’re storing a used candle, no. I see that all the time.”

Ms. Cane recently started a social media conversation by posting an article on Facebook from the Apartment Therapy blog titled “54 Things Absolutely Nobody Should Be Storing, Anywhere.” To name a few, the list includes old magazines, chipped mugs, holiday decorations that make you groan, obligatory “tangles of cords” from electronic devices that may not even be in your possession anymore, and “the bags of seashells you’ve been saving for seven years for an unspecified craft.”

Raise your hand, East Enders, if you’re guilty of that last one.

Ms. Cane, of course, doesn’t have any of that type of clutter. Nor does Jean Linder, a professional organizer from East Quogue, who describes herself as a “minimalist.”

Ms. Linder’s suggestion for how to decide whether to keep something or toss it is to assign it a monetary value. She also recommends against storing objects. “It costs money and your stuff gets ruined.”

De-cluttering, rather than storing, “is work, but I think it’s worth it,” Ms. Linder said. “It’s better to make decisions. Make it a project.”

“If it’s easily replaceable for under $15 or $20, and you won’t need it in another year, or you can’t think of a precise situation you’ll be using it in, you can get rid of it, because you’re probably not going to use it.”

Ms. Cane usually applies her rules about storage to “vaults,” in which the contents of whole houses are relegated to storage. But she goes a little easier on the self-storage industry, which tends to be short-term in nature.

“Once it gets into storage it’s so tricky,” Ms. Cane said. “It really complicates things. But unless you’re buying a house within a year, it’s very, very challenging what happens to it next.”

She recently found herself renting a large warehouse in East Hampton to simultaneously liquidate the contents of vaults belonging to five different clients. It was not cheap. “You’re spending money to stop spending money,” Ms. Cane said.

Her advice: Spend the time and energy to de-clutter your house instead of putting large amounts of stuff into storage. It will save you time, money, and many headaches in the long run.

“I always think it’s important to weigh the emotional piece of it,” Ms. Cane said, “but eventually, no matter how much money you have, you get to a place where you say enough is enough.”

Mashashimuet Park's History and Future
A Conference for Young People to Create Solutions
Get Outside, Get Moving
END_OF_DOCUMENT_TOKEN_TO_BE_REPLACED