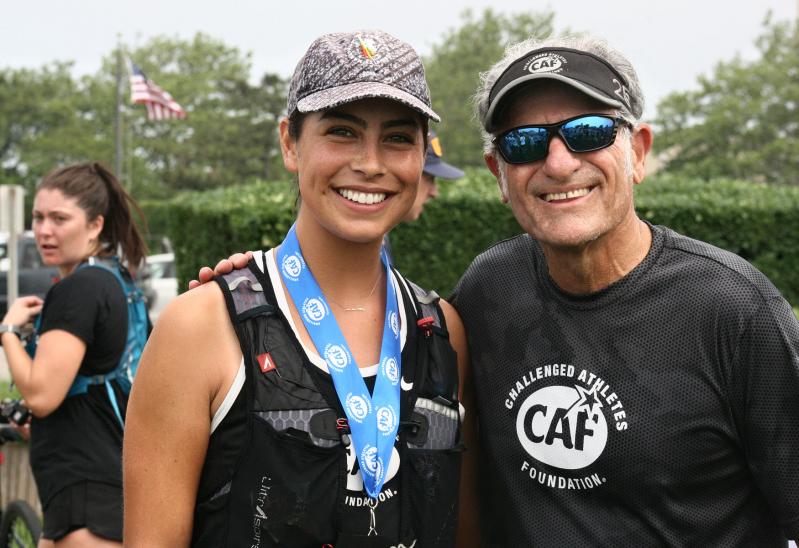 Molly Cuevas had as of Saturday raised around $43,000 for the Challenged Athletes Foundation, one of whose founders, Bob Babbitt, at right, ran the last six-mile leg with her.
Jack Graves
By Jack Graves

Molly Cuevas, a 24-year-old former three-time all-American field hockey player at Adelphi who is from San Jose, Calif., finished the last leg of her 3,000-plus-mile cross-country fund-raising run at around 10 a.m. Saturday morning at the Circle in Montauk, where she was welcomed by a crowd of 50 or so that included her mother, Jillian, her father, Manny, her best friend, Whitney Kanavel, five former Adelphi teammates, and her goldendoodle, Mayer, among the well-wishers.

About an hour later she led an entourage to the beach nearby, where she put a foot in the ocean, as she had done at her feat’s starting point in Santa Monica three months ago.

“She ran across the United States,” one of her friends told a curious passer-by.

“If anyone could do it, it would be Molly,” one of her former teammates, Tina Brindisi, said when this writer said he could imagine only a very few undertaking such an ordeal. Indeed, she had taken a year, under a coach’s aegis, to build up her strength and stamina.

“And she ran in all kinds of weather,” another teammate remarked.

Cuevas herself, a tall, athletic brunette with an engaging smile, who did not look any worse for the wear, said, after consulting her iPhone, that she had raised about $43,000 thus far for the Challenged Athletes Foundation, one of whose founders, Bob Babbitt, an authority on the history of Hawaii’s Ironman competition, was in the group that ran with her on the final six-mile leg, from Goldberg’s deli on the Napeague stretch to downtown Montauk.

The foundation, Babbitt said at the finish line, had in its 26 years raised $112 million and had awarded 26,000 prosthetic grants so that challenged athletes throughout the United States, Puerto Rico, and in 43 other countries could remain active in 103 different sports.

“She ran, ate, and slept,” said her mother. “We stayed at mobile home parks each night, though sometimes we had to drive 30 minutes away to find one.”

The cross-U.S. route chosen, said Kanavel, who was with the Cuevases throughout the first and third months, and ran about 850 miles herself in those spans, “was mostly beautiful. We were on interstates only a couple of times.”

It was “inspiring” what her friend had done, Kanavel said.

Cuevas, who holds a master’s degree in sports management, has said on her milesbymolly.com website that she undertook the challenge on behalf of the Challenged Athletes Foundation “to raise funds for and raise awareness of those who are challenged every day. . . . Sports create a sense of confidence, community, inclusion, and empowerment.

I believe everyone deserves a chance to participate in such meaningful experiences.”

She has also written, “Together we can help people feel the most sublime moments that sports have to offer.”

One of the well-wishers that day was a below-the-knee amputee, Chris Provenzano, a 29-year-old New York City resident who had, with his girlfriend, Jules Biolsi, happened upon the celebration at the Circle after having participated in a spin class at SoulCycle across the street.

He had lost his left leg, Provenzano said, to complications from a rare autoimmune disease midway through his senior year at Villanova, where he had been a catcher and outfielder on its varsity baseball team.

Yes, he had been depressed for a bit, he said in answer to a question, but “it happened at a time when there were ads all over for the Paralympics.” That’s how he had found out, he said, about the Challenged Athletes Foundation, which provided him with a carbon-fiber running leg, worth, he thought, about $20,000.

Asked if he was running competitively, Provenzano, a financial trader who grew up in Los Angeles, said, “I did the New York Marathon in 2017, and raised $15,000 for the foundation in doing it, and I did the New York Half-Marathon too, in 2018.” He generally runs about 10 miles a week, he said, in Central Park and along the West Side Highway.

“It’s amazing what she’s done,” Provenzano said of Cuevas. “She’s gone far to raise awareness of challenged athletes. . . . There’s nothing,” he concluded, “that people can’t do.”

She would stay connected with the foundation for the rest of her life, said Cuevas, who can truly say now that she is a cross-country runner.

Asked what, following a presumably much-needed rest, she would do next — swim the Atlantic, perhaps? — Cuevas said, with a smile, “I’m not sure . . . I’ll think of something. And I’ll let you know.”