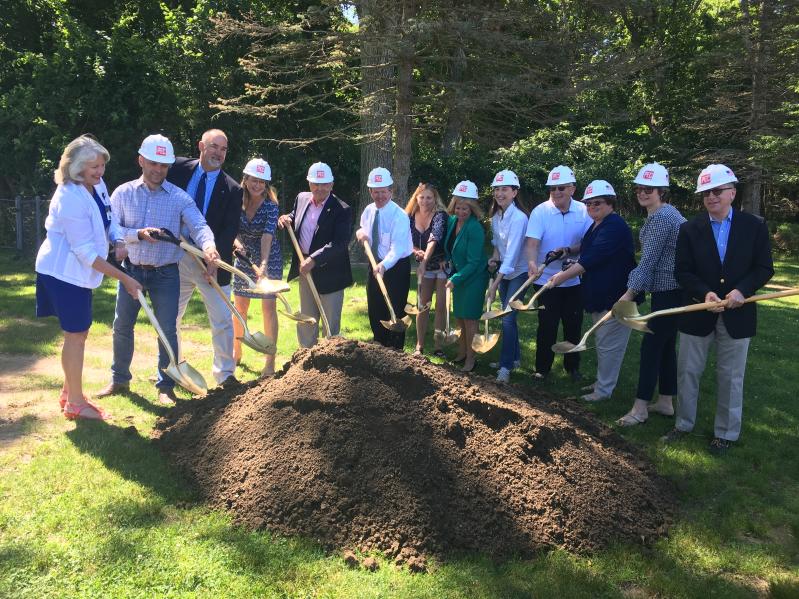 Springs School and town and Suffolk officials took part in a ceremonial ground-breaking for a new wastewater system at the school on Monday.
Courtesy Springs School District
By Christine Sampson

The Springs School broke ground Monday on its long-awaited, pollution-reducing, new septic system, which will take about two months to complete and is expected to improve the health of local waters.

“It’s very exciting,” Suffolk Legislator Bridget Fleming, who helped the school celebrate the event, said the next day. “Accabonac Harbor was deemed an impaired water body. There was a detection of ammonia in the harbor and Pussy’s Pond. There was a real concern about the school’s septic system, that it was failing, and we’ve seen impairment in the water bodies that are nearby, so it’s very heartening to see a community come together like this.”

The $1.5-million system was supported by a $1.3 million state grant that Assemblyman Fred W. Thiele Jr. and Senator Kenneth P. LaValle helped to secure. The grant was initially denied due to a mistake on a map, but the error was eventually resolved and the money was awarded. It was part of the district’s capital expansion referendum, supported by the voters in May 2018.

Officials anticipate the new septic system will yield five milliliters of nitrogen per gallon of waste, which is far less than the county’s efficiency standard of 19 milliliters. Research has shown large volumes of nitrogen, a byproduct of organic waste, are harmful when dissolved in water.

“The school board and superintendent made it a top priority and cleared all kinds of obstacles and considerations,” Ms. Fleming said. “The voters stepped up and approved the referendum because these kinds of necessary improvements don’t come without a cost, and the community saw that and was willing to take the steps they needed to take to reverse the pollution in the water.”

Debra Winter, the school superintendent, said that while the new system may be complete by the start of school in September, it may not be turned on until November, when the old system is deactivated.

“Springs School is going to be a model. Watch closely — we have a great deal of support,” Ms. Winter said during Monday’s meeting of the Springs School Board.

About 50 people attended the ceremony on Monday, which was complete with a sheet cake baked by Bettianne Mendez, a Springs School bus driver.

Also on Monday, the district kicked off the first phase of its $16.9 million building project, which will begin with a new roof, to be installed this summer.

“This is a very special day for Springs School, one that so many people have envisioned for at least the last five years,” Ms. Winter said. “This capital project is about equity, ensuring every student and staff member is under one roof. That the district meets the physical education requirements, that small-group instruction [meets] the minimum square footage the state recommends, that art and music have a designated space. Soccer and baseball fields so we can play home games. These are all needs, not wants.”