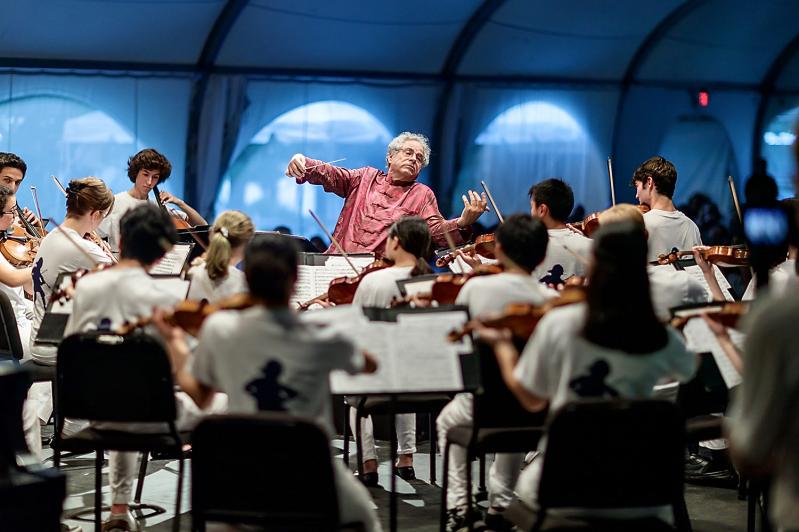 The Perlman Music Program is observing its 25th anniversary this year, a celebration not only of outstanding musical achievement but, even more important, the development of a year-round educational, nurturing, supportive community of musicians, ranging from talented 12-year-olds all the way up to mature alumni who are world-class concert artists.

At the core of the program is the summer music school, a seven-week session for students of violin, viola, cello, and bass ages 12 to 18, and a chamber music workshop for those 18 and above. Both offer ongoing concerts and open rehearsals on Shelter Island, in East Hampton, and in Manhattan, as well as intensive coaching and rehearsing for the participants. There are fall retreats that train older students to talk about and play classical music in East End schools, residencies in Florida and Israel, and occasional international tours. Over the years, the Perlman program has become a community of more than 400 students and alumni who share lifelong mentorship and a second family.

The high point of this anniversary season is a benefit party to be held tomorrow on the Shelter Island campus, starting at 6 p.m. with a beachfront reception with local wines, cocktails, and starters. A 7 p.m. concert with chamber ensemble and chorus will follow, and, at 8, a “Taste of Shelter Island” dinner and silent auction.

What is now a year-round international program based on Shelter Island began in 1994, when Toby Perlman, an education-based visionary, and Itzhak Perlman, “arguably the reigning virtuoso of the violin,” opened their East Hampton home for a two-week workshop. “I did a lot of reading and thinking about early childhood development, maybe because what I read resonated with me,” said Ms. Perlman, founder of the program and director of the Summer Music School, last week. “What I wanted to do was create a safe, loving, nurturing environment, an environment where the students would really feel that they can be themselves, take away some of the pressures that they live with, and just create a sort of paradise.”

“I think in my mind, the music is almost an excuse for something else. And the something else is, how do you live in the world and be kind, make the most of your life, be appreciative of your life; how does that all work. And I think one of the ways that it does work is that when children are in an environment where they can speak the truth and be themselves, it frees them in a way. They really start to smile.”

When the program first began, “it was a real mom-and-pop operation,” she said. “We knew all about the music part of it; we knew a lot about the kid part of it because we have five children of our own. But we didn’t know much about running it — and we just did it! We got lucky.”

They rented space and moved around to different places, “until we were lucky enough to end up on Shelter Island, which was just fortuitous, just great!” (What was “fortuitous” was the purchase in 2000, by a group of donors, of a 28-acre permanent campus on the island.)

The summer school’s stellar faculty is led by Mr. Perlman. Admission is based on talent, regardless of the student’s “economic background or financial means,” and the number of participants is intentionally limited. “It’s very difficult to keep it small, because we get such wonderful applicants. And to tell these kids ‘no’ is awful. But 35 is a magic number,” said Ms. Perlman. “It’s bigger than a family, but it’s small enough so that you can read each kid — you can tell at lunchtime who hasn’t had a good morning.”

The scope of the program expanded in 2003, when the chamber music workshop began, led by Merry Peckham, a renowned cellist and chair of chamber music at the New England Conservatory of Music. It too has become an integral part of the musical life of the East End. Along with an annual alumni weekend in August, the workshop has become a lifelong mentorship program.

Kristin Lee, a violinist who is an alumna of both the summer music school and the chamber music workshop and is now a member of the Chamber Music Society of Lincoln Center, said she could not be “more grateful to have had the most loving yet honest, nurturing yet disciplining, and accepting yet rule-setting environment to grow up in at the Perlman Music Program. Now in my 30s, I am confident and proud of who I am because the Perlmans taught me what is important in life. It’s not about competing with or comparing yourself to others, but growing into the best version of who you can be. While music is the theme at the Perlman Music Program, what I have gained through my decade of summers on Shelter Island is beyond music — lifelong lessons that I will cherish.”

The violinist Kenneth Renshaw, who won first prize in the Yehudi Menuhin International Violin Competition in Beijing in 2012 and has appeared with the Staatskapelle Weimar and the National Orchestra of Belgium, is now on the Perlman’s faculty. “My first summer in the ‘Littles’ program [as it is affectionately known] was an awakening,” he said. “It was my first time being surrounded by other kids as passionate about music as I was. Each day I was profoundly inspired listening to my peers play, exchanging ideas with them, and just having fun together. At that age, it’s normal to feel intimidated, but at Perlman the family-like atmosphere created a feeling of warmth and support among the students that was free from unhealthy competitive pressures.”

The nurturing of “Littles” continues today with the Adopt-a-Little program, which pairs young Perlman musicians applying to colleges with alumni already at those schools, to provide guidance, support, and answers to such questions as admissions, classes, and life on campus.

Patrick Romano has been the music program’s choral director since its third season. “Toby and Itzhak love singing,” he said last week. “He listens to opera all the time. He’ll often do video nights with the students, and he’ll play videos of singers. For practical reasons, they wanted one time in the day when the entire community comes together and does something that involves music, and the best way to do this is with a chorus. This chorus is not just the students, it’s the faculty, the pianists that work here, the staff, the nurse, and five or six community members who live on Shelter Island.”

“More to the point, it gives students an opportunity to work with composers in a different way, through singing, not playing. Also, we talk a lot about phrasing and breathing and articulation, all things that they can relate to in their playing of their instrument. I teach them how to breathe and support their sound and how to spin out a beautiful sound that’s unforced and focused.” Tomorrow night, Mr. Romano will be conducting along with Mr. Perlman. Choral music will include works by Beethoven, Bach, and Elgar.

At the big event tomorrow, “We have some musical surprises that people will enjoy. The food is always fabulous,” said Ms. Perlman. “The event feels authentic. It’s a reflection of the program, of who we are — it’s not fancy-shmancy. But it is filled with supporters who have become very loyal and very much a part of our lives.”

Seating is limited; call 212-877-5045 for information about reservations and about an online auction. More information can be found at perlmanmusicprogram.org.