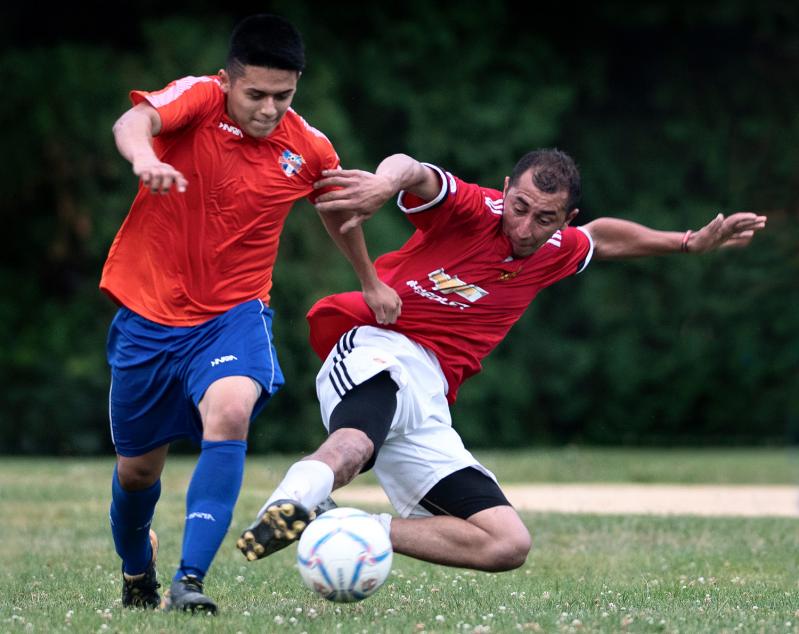 Justin Carpio, above left, and his East Hampton Soccer Fever teammates were tested by Sag Harbor United in the first of the 7-on-7 soccer league’s semifinals on July 17, but wound up winning 4-1.
Craig Macnaughton
By Jack Graves

The East Hampton Soccer Fever and Maidstone Market 7-on-7 men’s soccer teams were to have vied last night in the Wednesday evening league’s championship game, and it was hard, going in, to choose between them.

Soccer Fever, a relatively new addition to the league, finished one point higher than the Market, and the teams played to 1-1 ties in their two regular-season encounters, on May 8 and June 12.

Soccer Fever, most of whose players are in their early 20s, defeated Sag Harbor United 4-1, but the game was much more closely contested than the final score indicated.

Soccer Fever took a 1-0 lead midway through the first half  on a goal by Fuquen, who, on receiving a pass in close from his fellow forward, Justin Carpio, beat S.H.U.’s goalie, Victor Velasquez, the league’s stingiest.

Sag Harbor, whose forwards had tested Soccer Fever’s goalie, Esteban Aguilar, in the first half, but couldn’t get one by him, tied it at 1-1 eight minutes into the second period, on a close-in shot by Pedro Cristobal, who was assisted by Pedro Martinez. Soon after, Mario Bautista’s waist-high bid toward the left post was slapped away by Aguilar.

Fuquen came up big again in the 47th minute, tapping a shot into the nets after Carpio, who had brought the ball into the box on the left side, had drawn Velasquez out of the goal. That put Soccer Fever up 2-1.

With Velasquez making spectacular saves that kept Sag Harbor in the game, the challengers continued to counter whenever opportunities presented themselves, but Aguilar hung tough.

The victors tacked on two more scores in the final three minutes, on a penalty kick by Carpio after he’d been taken down from behind by a defender in the penalty area, and on another goal by Fuquen, his third of the night, after gathering in a long, over-the-top pass from Donte Donegal.

Tuxpan similarly gave Maidstone Market a tough go in the nightcap, though the Market wound up a 2-1 winner thanks to goals by Gehider Garcia, in the first half, and by Antonio Padilla in the second.

Tuxpan’s goalie, Pedro Aguedo, was roughed up early on as he dived to save Piedramartel’s hard ground-hugging shot toward the right post, but, though his jaw was jarred by the ball, remained in the game.

Aguedo parried Piedramartel again in the 20th minute and, two minutes later, blocked a shot by Padilla, but, with about six and a half minutes left until the halftime break, Garcia finished off a three-pronged attack with a knee-high blast into the right side of Tuxpan’s cage.

The lights came on as the second half began. Three and a half minutes into it, as Aguedo dashed about, leaving the goal temporarily open, Padilla, who was unmarked, watched in disbelief as his shot hit the right post and bounced away.

Daniel Martinez, Tuxpan’s big center midfielder, tied it up in the 40th minute, though in the 48th Maidstone made it 2-1 on a goal by Padilla that capped a counter attack that began when Julian Barahona, a defender that night, dashed all the way down the field and into the penalty box before dishing off.

Less than a minute later, Tuxpan came close to tying it up again, but that was to be its last best chance in the game’s final 10 or so minutes.