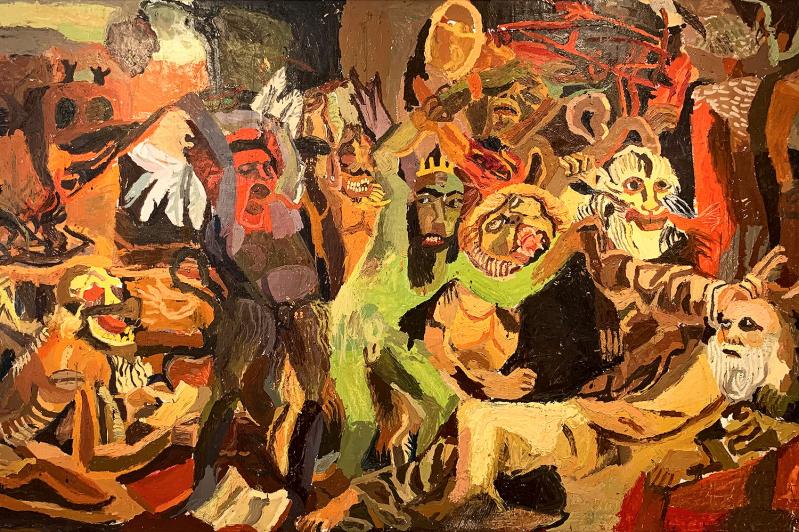 There is a much to see and admire in “Compendium Part II” at Mark Borghi Fine Art in Bridgehampton. But there are a few standouts in the mix of postwar and contemporary art that includes work by George Condo, John Chamberlain, Costantino Nivola, Alex Katz, Yves Klein, Yayoi Kusama, and many others.

The real showstopper is Elaine de Kooning’s “Untitled #12” from her “Black Mountain Abstractions” series. The paintings were found rolled up in her studio at the time of her death in 1989 and were exhibited in New York City in 1991 at the Washburn Gallery. De Kooning and her husband, Willem de Kooning, spent the summer of 1948 at Black Mountain College teaching art and collaborating with Josef Albers, John Cage, Merce Cunningham, and other artistic peers.

Although her decision to put the works away indicates ambivalence about them, the painting at Borghi is striking in that it resembles compositions Bill de Kooning painted decades later. The flesh tones she used in this painting also relate to his palette. The painting seems to presage a number of things he later employed in his work.

The abstract biomorphic forms resemble humanoid parts and extremities, but in a completely non-literal way. It’s as if she pulled, bent, and melted shapes made of wax or clay until they became alien life forms or some kind of cartoon. The accent colors of yellow as background and red as highlight demonstrate an artist working with confidence after 10 years of commitment to her career.

De Kooning’s work hangs near strong paintings by Hedda Sterne, Helen Frankenthaler, and Joan Mitchell, other reminders of how profound the talent was in this group of artistic contemporaries and continues to be now that it is receiving the attention it always

Another painting with a similar palette but a lot more real estate is Clintel Steed’s Neo-Expressionist tour de force based on a painting of the “Temptation of St. Anthony” by a 15th-century Italian Renaissance artist. The original is a blend of high naturalism enlivened with a fantastical mix of beasts with both human and animalistic features.

The artist’s upbringing by Pentecostal Christians in Salt Lake City feels very relevant here in the naked and mystical spiritualism of the subject matter. He takes it much further in his loose interpretation from 2005, which preserves the composition while subjecting it to his highly personalized take. His faces retain the essential appearance of these demons who come to tempt the saint in the desert. But he plays up the palette with acid greens and fiery reds and captures the key elements of the faces he recreates as he transforms them into his own fever dream.

The monumental canvas, approximately 14 by 7 feet, touches on both the physicality of action painting as well as the drama of church murals.

The Borghi show also has some pocket or mini exhibitions among the larger group of objects placed throughout the gallery. These seem to point to an awareness of current trends or headlines in the art world. A group of Larry Poons paintings from the 1970s and 1980s recognizes his re-emergence in the marketplace in the past couple of years with both an important gallery exhibition of his recent work and his inclusion in the film “The Price of Everything,” which points to him as an example of the vagaries of the art market and the quirky fluctuations of taste and price.

Three Richard Prince works on canvas hang together in a row, all from this decade. There is one of his captured Instagram posts recreated in an inkjet print, a slivery white abstraction, and a mixed-media composition called “Untitled (Picasso).” The last features photographic images of nude women assuming classic bather poses superimposed with his loose line drawings and modifications of the photographic anatomies to incorporate Picasso-esque extremities and other abstractions.

Those who think of Mr. Prince in terms of the typical art fair fodder of “Nurse” and “Joke” paintings and Marlboro men will find engagement with the less ubiquitous subject matter. Mr. Borghi has also included one of his book works, “The Catcher in the Rye,” embellished with rubber bands.

There is a huge mix here, and it’s safe to say there is enough variety that someone coming to the gallery will find something and even many things to appreciate, even if the assortment might also encompass artists and objects that are not to one’s liking.

This particular installation will remain on view through the end of the month.