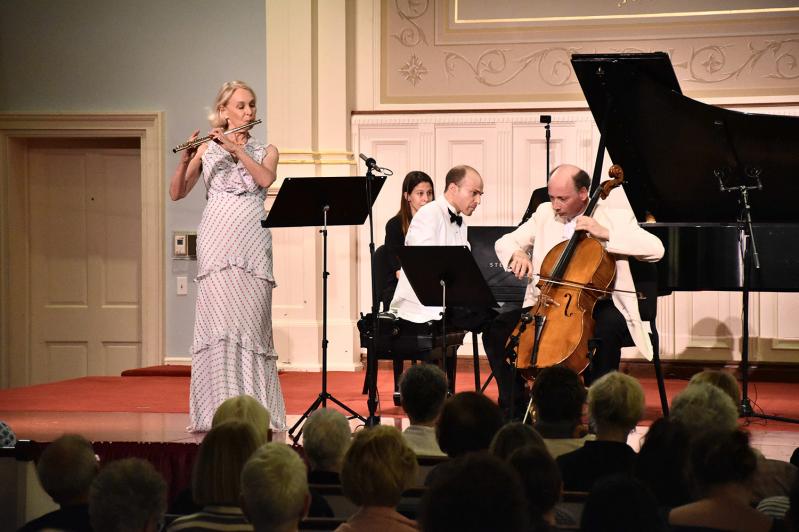 The Bridgehampton Chamber Music Festival’s theme this summer is “Winds of Change,” which has a triple meaning: music for woodwind instruments, music by women composers, and, more broadly, musical and societal changes “in a time too often defined by animosity and discord,” as the season’s brochure says.

In its 36th season, the festival will offer 12 concerts from Sunday through Aug. 18 featuring all of Mozart’s quartets and quintets for solo wind instruments and strings (oboe, clarinet, French horn, and flute) as well as the Quintet for Piano and Winds, and will highlight 13 women composers from the mid-1800s to the present day.

The wind instrument theme will be introduced with a free outdoor concert by the Project Fusion Saxophone Quartet, winner of the 2015 Astral Artist National Auditions, on Wednesday at 6:30 p.m. on the grounds of Bridgehampton Presbyterian Church. Having a saxophone quartet onstage is branching out quite a bit for the festival, and as the name implies, the program ranges from new music and Gershwin to Bach arranged for saxophones! Concertgoers can sit in a chair under the tent or take the whole family with blanket and picnic.

As plans were being made for the festival, the idea of emphasizing the wind instruments came first, Marya Martin, the B.C.M.F. founder and artistic director, said last week. “Then I started listening to all these women composers, and we came up with the idea of ‘Winds of Change.’ As I look back on our programs, the fact is that we haven’t included many women composers over the years.”

Speaking about a program planned at the Parrish Art Museum on Aug. 5, which is concurrent with an exhibition of the work of the abstract expressionist painter Helen Frankenthaler, Ms. Martin said, “I thought of composers, who, like her, composed with a certain sort of iridescence, and every one I thought of was a woman. There are a number in the late-19th century, going through the Second World War, and then there’s silence . . . because the movement was stopped because of the war. And, what’s stunning to me, is that I think more than 50 percent of composers who are putting out works now are women.” Most of the concerts will feature women composers, and the program at the Parrish does so entirely.

Some of the compositions to be heard during the month include Louise Farrenc’s Sextet for Wind Quintet and Piano, Op. 40, from the 19th century, Sofia Gubaidulina’s “Sounds of the Forest” for flute and piano from the 20th, and, from this century, Victoria Kelly’s “Good Night Kiwi” for piano and Anna Clyne’s “Rest These Hands” for solo violin.

Ms. Martin said that the other overarching theme, “about freedom, ethnic diversity, and being open to appreciating everything around us,” brings to mind the program called “Composer Portrait: Dvorak in the New World,” on Sunday. “We focus on three years: He came to America in 1893, and he left in 1895. But he came and fell in love with both African-American and Native American music. We have some wonderful quotes from him saying that he thinks the future of music is in the wonderful ethnic genres that are found here.”

The program features the “American” string quartet and an arrangement of his melody that became the song “Goin’ Home” for cello and piano. The evening will be narrated by the author Roger Rosenblatt, who is “funny, has a very quick wit, and he’s actually a pianist himself,” said Ms. Martin. This is at Bridgehampton Presbyterian Church, noted for its fine acoustics for chamber music, as are most of the events.

Reena Esmail, an Indian-American composer whose work will be heard on Aug. 18, the season finale, is schooled as a Western composer and also has 10 years of training in Hindustani, which is North Indian, classical music. Speaking of her writing style and motivation, she said last week, “To me, the larger story is that music and writing music has so much to do with relationships and valuing the people that I love. And so, I think one of the reasons it has its resonance in the world is because it is so personal.”

Her “Saans,” which means “breath” in Hindi, was originally a movement of a clarinet concerto, and later she arranged it for piano, violin, and cello as a wedding gift for friends of hers, because “this piece feels to me very romantic, very intimate,” she explained.

“As composers we’re very isolated, we spend a lot of time at a piano looking at some dots, so if you’re a social person you’re always trying to think about ways you can build a relationship through the music that you write.” As an extension of this conviction, she runs an organization called Shastra, which seeks to build bridges between Western and Indian classical music and cultures.

“There are so many ways that we interact with other cultures, and a lot of them are not the best ways: Sometimes we go to war with them, sometimes we have trade and economic issues, and it’s always a game where someone wins and someone loses,” she said. “I think it’s important to have places where we interact where everyone can win and we create experiences that allow people to come together and focus on things that they love and things that are positive.” Indeed, this sums up much of what the Bridgehampton Chamber Music Festival is about.

And, for the icing on the proverbial (birthday) cake, this year is George Crumb’s 90th, and his “Vox Balaenae” (“Voice of the Whale”), a landmark 1971 composition for electric flute, cello, and amplified piano, will be performed on July 28. The instruments employ various avant-garde special-effect techniques and the score asks for the performers to be in black half-masks, which, “by effacing a sense of human projection, will symbolize the powerful impersonal forces of nature (nature dehumanized),” according to the composer. “It is really his trying to imitate the voice of the whale under the ocean,” Ms. Martin said. “It’s a great sound.”

The annual benefit concert is on July 27 at the Atlantic Golf Club, and the annual Wm. Brian Little concert on Aug. 9 in the Channing Daughters Winery sculpture garden is intriguingly titled “Music from the Movies.”

In the course of the four weeks, about 36 instrumentalists will be heard, every one with a stellar résumé; many of them have appeared here a number of times. Onstage for the first time with the festival will be the 2016 Avery Fisher Career Grant recipient Tessa Lark, violin, New York Philharmonic assistant principal viola Cong Wu, MidtVest  Ensemble member Tommaso Lonquich, clarinet, and the celebrated pianists Gloria Chien and Juho Pohjonen.

As we have come to expect of the festival, all of the variety is delightfully sandwiched between a generous helping of the well-established standards of the genre, including Schubert’s “Trout” Quintet, Brahms’s Piano Quintet in F Minor, piano quartets by Fauré, Brahms, Schumann, and Mendelssohn, and samplings of Copland, Prokofiev, and Debussy.

And, there is much more to be heard in the 12 events. Tickets range from $35 to $75 for most events, $10 for students, with benefits for purchasing tickets to four or more concerts. Complete information about all of this as well as their 12 recordings is at bcmf.org or 212-741-9073