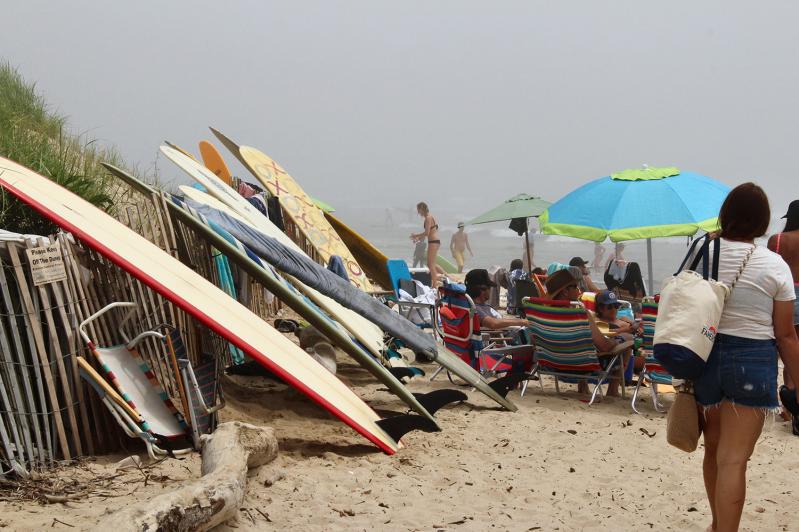 Health issues and sewage smells have been reported recently at Ditch Plain, pictured above.
Durell Godfrey
By Christine Sampson

An East Hampton Town official and a representative of Concerned Citizens of Montauk both confirmed this week that they have received reports of foul odors at Ditch Plain and people experiencing skin, eye, and sinus irritation after taking a dip in the water there in the last two to three weeks.

“We were contacted by a couple of different people, including one with an upper respiratory issue, a sinus infection, who had been surfing there,” said Kate Rossi-Snook, environmental advocate with C.C.O.M.

Kim Shaw, East Hampton Town’s environmental protection director, said her department had also heard from people about health issues and what has been described as “the smell of sewage” in the area.

Ms. Rossi-Snook was confused by its cause. She herself conducts water quality testing at Ditch Plain on a regular basis, sampling the water east of the jetty for the presence of enterococcus — bacteria found in fecal matter. C.C.O.M. and the Surfrider Foundation check dozens of sites throughout East Hampton and Southampton Towns year round, rating them from “low” to “high” if bacteria are present. Recent test results at Ditch Plain, from samples taken on July 1 as well as Monday of this week, showed no signs of enterococcus, Ms. Rossi-Snook said.

“The last time we had any kid of hit [at Ditch Plain] was early May, and it  was ‘medium,’ ” she said. “Our samples give us an idea of broader trends, but I’m surprised that it came out as zero and a few days later we started getting these reports.”

Ms. Shaw, too, was puzzled by the illnesses being reported. She said Ditch Plain, in theory, benefits from the effects of the tides, which continually flush the area with each cycle.

“You would think you would have more of a problem in an embayment,” she said. “There’s got to be something going on — dilution should be going on. It’s weird. I just don’t know what that source could be to get sick like that.”

Ms. Rossi-Snook said her most recent tests were done at low tide.

“A lot of times it can be dependent on the tide,” she said. “Especially in an ocean. At high tide, if people went in and are swimming there, that’s a bad time to go. If it is at low tide, that means things have been flushed out and have been diluted in the ocean.”

But as for the alleged foul odor, Ms. Shaw suggested it could be originating from the septic system at the nearby Montauk Shores Condominiums mobile home community. She believes it to be “undersized” for the volume of wastewater produced there. It has the capacity to treat 30,000 gallons per day but Mon tauk Shores collectively produces about 45,000 gallons per day, Ms. Shaw said.

The septic system is located about 700 feet away from Ditch Plain, she said. Its setback from the water is far enough, she said, “but in Montauk we have high groundwater, we have clay, and the flow is definitely toward the ocean.”

Philip Andriola, vice president of the board of managers for Montauk Shores, yesterday disputed Ms. Shaw’s hypothesis. The septic system there is functioning normally and within its parameters, he said. Any claim that it is “over capacity” is based on “extrapolation” during a two-month period of peak usage, rather than an average, Mr. Andriola said.

“There’s never been one documented report of our sewer system leaking,” he said. “It is emptied and cleaned regularly.”

Mr. Andriola said he has not detected any foul scents at Ditch Plain, and suggested any odor people did smell might have come from the bathroom there.

“There are thousands there regularly, and there is a bathroom there being used by thousands on a beach zoned for 450 or so. What’s going on with that facility?” he asked. “I find it to be one of the cleaner public bathrooms around, so I’m not criticizing the town, and I want to make that clear. But what’s the septic system there? What’s the capacity? . . . Where’s all that water going?”

Mr. Andriola also suggested stormwater runoff into the ocean at Ditch Plain, carrying with it fecal matter from deer and other wildlife, is responsible for causing illnesses in people who bathe there.

“Ditch Plains is called ‘Ditch’ for a reason,” he said.

An approximately $3 million plan for an upgraded wastewater treatment system at Montauk Shores is currently making its way through the town and county regulatory processes, but Mr. Andriola said Montauk Shores is “not being forced to replace our septic system.”

“The [County] Health Department has confirmed that our system is working and fine,” he said. “We were looking to upgrade the septic system prior to any of these conversations to just improve our community. Who wouldn’t? There are a lot of new owners who have come into the community and everyone wants to upgrade and be cleaner. It’s just natural.”

Mr. Andriola said Montauk Shores is even seeking money from a town program to help offset the cost of upgrading, just as other residents of East Hampton Town have done.

“We organize beach cleanups each year. We have a community garden,” he said. “We’re adjacent to preserved land and keep everything as clean as possible. It’s a spectacularly clean community. We’re out there trying to be good neighbors and are upgrading as part of a community solution for clean air, a clean beach, clean energy, and obviously with the nitrates, to help clean the water for all of us.”

Ms. Shaw agreed the mobile home community is “trying to do the right thing.”

“It’s just that they haven’t made it to Health Department review yet,” she said. “They are moving forward with a new system, but things just don’t happen fast enough.”

Jim Rutenberg, a surfer who has a house in Montauk, said he noticed a foul smell right before the Fourth of July holiday.

“It was sort of like the very inside, the water closest to the shore where you surf in, there was a very strong odor,” he said. “I don’t recall ever smelling it quite that strong before. Every once in a while over the years you’d get a hint, but not a lot, and it was rare. This was the first time there was a super-strong scent of septic, the kind I’ve smelled at much less pristine surf breaks in other parts of the world.”

Indeed, the issue is not unique to Montauk. The Los Angeles Times has reported similar issues in places like Malibu and Laguna Beach. In 2006, according to an L.A. Times report headlined “Sniffing Out the Source of the ‘Malibu Smell,’ local officials suspected that “some of the septic tanks that handle the household sewage of Malibu’s multimillion-dollar canyon homes are spilling pollutants into the oak-shaded creeks that tumble down to Santa Monica Bay, tainting Surfrider and other famous beaches.” And late last year, The L.A. Times said Laguna Beach city officials predicted the sewage smell at Laguna Beach would “simmer down by summer” after a new odor control system was approved for the city.

Mr. Rutenberg said there’s a climate of worry among some regulars at Ditch Plain.

“You never know for sure. It’s sort of like the Ditch Plains wireless, all of us comparing notes,” he said. “It was definitely worrisome falling into the water there where it smelled, where you’d have to worry about getting infections or getting sick. People are definitely a little concerned. There’s no concrete evidence that it was caused by a septic situation there at Ditch, but it definitely raises the worry. It’s a special place, so we all just hope that it stays clean.”