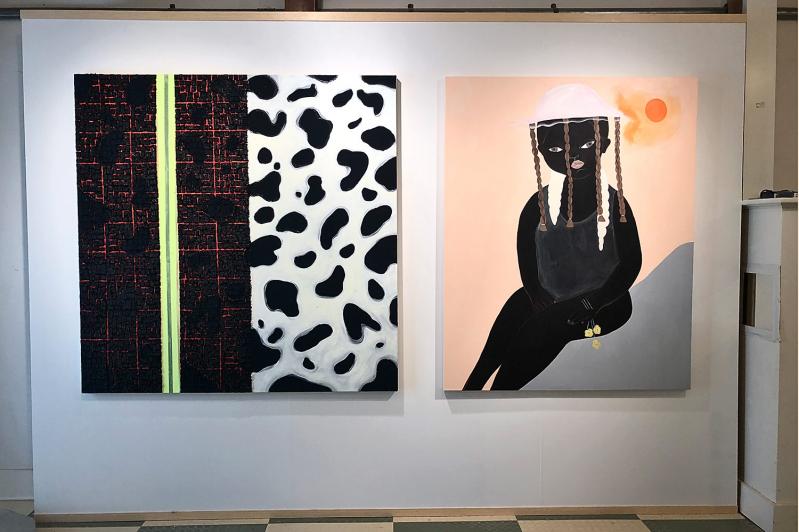 Amagansett’s Upstairs Art Fair, a small but well attended fair attracting innovative dealers from the East End and New York City, will return for its third iteration this weekend at its home on the top floor at the old Amagansett Applied Arts building at 11 Indian Wells Road.

The fair features an informal but focused selection of works from artists represented by veterans such as Harper’s Books, Half Gallery, Rachel Uffner Gallery, Halsey McKay Gallery, Eric Firestone Gallery, 56 Henry, New Release, and Caysson & Benetiere. Participating for their first time this year are Marinaro Gallery, Jack Hanley, CANADA, and Anna Zorina Gallery. Joel Mesler, whose Rental Gallery has participated in previous fairs, will be on hand to paint portraits of fair attendees during the opening reception tomorrow.

Harper Levine, one of the fair’s founders and organizers along with Bill Powers (whose Half Gallery is also an exhibitor), said last week that the impetus for organizing the event three years ago was that he and Mr. Powers wanted to see a fair here with a casual and intimate atmosphere to view art.

“Until Upstairs the Hamptons only had over-produced, corporate fairs, heavy on the champagne, and light on the connoisseurship,” he said. Given the number of fairs that tried this approach and have receded from the scene in recent years, “this model, clearly, was failing.”

Adopting an analogous “small is beautiful” model, other fairs with a similar concept have sprung up recently across the country. One such fair is Felix in Los Angeles, where galleries transformed hotel rooms into art fair booths in February. Felix has already announced that it will return for a second year at the same time.

“This stripped-down approach . . . places emphasis on art and artists, rather than large convention halls and corporate sponsorship,” Mr. Levine said.

He said that the Upstairs fair also has a casual application process. “We reach out to galleries, and galleries know where to find us. There’s no formal vetting, nothing political, as is so often the case with other fairs.”

The fair offers a chance for the galleries on Newtown Lane to work collaboratively with city venues that have a kindred aesthetic and approach. “Over the past several years, the contemporary art scene in the Hamptons has developed,” Mr. Levine said. “Just on Newtown Lane alone, there are five quality galleries, and many more in the surrounding area.”

The fair will open Friday from 6 to 8 p.m. and continues Saturday and Sunday from 11 a.m. to 5 p.m. It is free and open to the public.