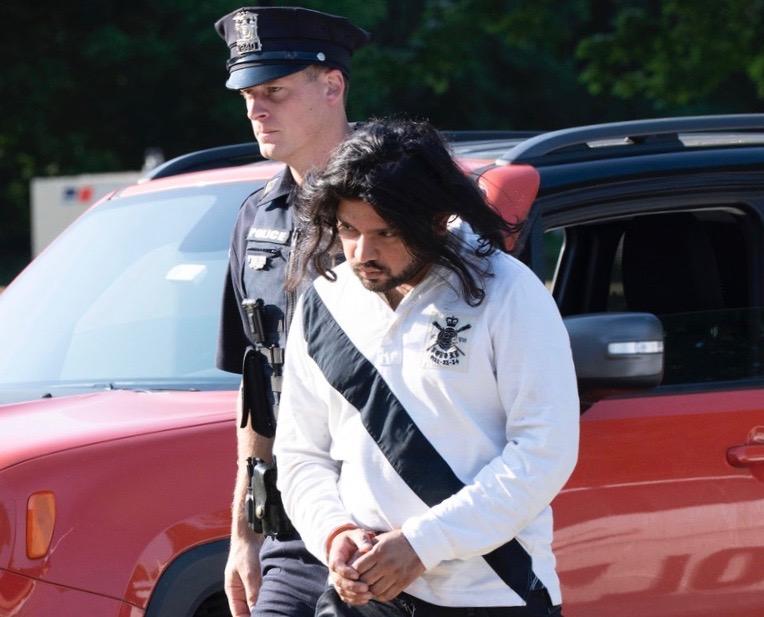 Amar B. Patel allegedly threw a cement block through the windshield and rear window of a 2018 Tesla in Montauk on Saturday night.
Hampton Pix
By Taylor K. Vecsey

A Greenlawn man was charged with a felony after throwing a cement block through the windshield and rear window of a 2018 Tesla that was parked at a rental house on Big Reed Path in Montauk on Saturday night, East Hampton Town police said. Amar B. Patel, 35, also allegedly scratched the paint on both the passenger-side and driver’s-side doors and quarter panels of the Tesla, which belongs to Harman Dhamija.

Mr. Patel was arrested around 7 a.m. the next day. The incident occurred at about 4:50 a.m. Police said the damage exceeded $1,500, leading to a second-degree criminal mischief charge. There was no word what led Mr. Patel to lash out at the Tesla or Mr. Dhamija. Justice Lisa R. Rana arraigned Mr. Patel on Sunday and released him on $2,000 bail.

In Sag Harbor, a teenager was arrested on a felony criminal mischief charge after damaging a grassy area at a softball field in Mashashimuet Park on July 8. Police received a report of two vehicles doing doughnuts around 3:30 p.m., and employees were able to lock the exit gate before either vehicle could leave the park.

Adam C. Jannetti, 19, was arrested for allegedly damaging the grass. Police determined that the other vehicle did not cause any damage, and that driver was released. Mr. Jannetti was charged with third-degree criminal mischief. He posted $200 bail and was released. He is due in Sag Harbor Village Justice Court at a later date.

Nicolas Eli Farmer, 29, of Harrison, N.Y., was arrested on a misdemeanor marijuana possession charge during a traffic stop on West Lake Drive in Montauk on July 10. He was in possession of marijuana with an aggregate weight of 64 grams, police said. It was sealed in a plastic bag inside his 2003 Chevrolet, along with 37 tightly rolled marijuana cigarettes in plastic cigar holders, the police report said.

Mr. Farmer was charged with criminal possession of marijuana in the fifth degree, which is levied when the aggregate weight is more than 25 grams. He posted $100 bail at police headquarters and was released with an appearance ticket. He is due in East Hampton Town Justice Court next Thursday.

Also in Montauk, two men were arrested on misdemeanor drug charges after police found a vial of a pink powdery substance that later tested positive for the presence of amphetamines in the car they were occupying, according to their arrest reports. Juan Pablo Villa-Guichay, who is 36, and David Gabriel Urrego-Echeverri, 22, of Queens were in a car on Montauk Highway on July 7 around 12:40 a.m.

Although police did not indicate why they pulled the vehicle over, an officer noticed a small clear vial in plain view on the floor and within “a grabbable area” of both defendants.

Both men were charged with seventh-degree criminal possession of a controlled substance. They were released at police headquarters after each posted $100 bail. They are due in court next Thursday.